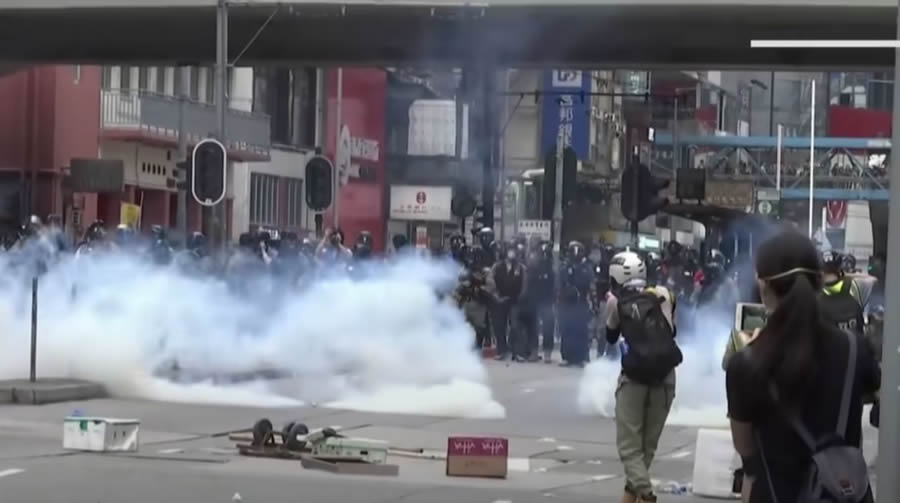 On June 30, 2020, China passed a sweeping security law for Hong Kong. After months of massive pro-democracy protests which peaked at over a million last June, the COVID-19 pandemic was the perfect cover for a crackdown. Few people in Hong Kong had seen the 66 secret articles of the law before it was passed. China’s Standing Committee simply overruled Hong Kong’s legislature. For enforcement, Beijing will be establishing a new security office in Hong Kong.

The law is brutal. Prohibitions include any form of secession, terrorism, collusion, and subversion. Subversion can be interpreted as undermining the authority of the central government in any way. Terrorism can be defined as vandalizing public transit (think pro-democracy slogans.) All of these “crimes” carry a maximum sentence of life in prison. Trials can be held behind closed doors. Anyone suspect can be wiretapped.

The freedom of Hong Kong has been crushed. The West has scarcely made a peep.

Until recently, Hong Kong was a British Colony. In 1997, the UK turned the territory over to Red China under special terms. Hong Kong would retain a “high degree of autonomy” until at least 2047. For fifty years, there would be “one country, two systems.” This would permit Hong Kongers to govern their own affairs — albeit in the shadow of a totalitarian regime. Critics at the time warned that the Communist Party could not be trusted, but the handover proceeded nonetheless.

In 2019, Hong Kong’s leader Carrie Lam attempted to pass an extradition bill. The bill would have permitted China to ship those they defined as criminals to the mainland. There, they could be imprisoned, tortured, and even executed without trial. In response, Hong Kong erupted.

Protests rocked the streets for months. The freedom fighters were met with tear gas and rubber bullets. Still, they escalated. The world was transfixed by stunning images of endless crowds lighting up the night with cellphone screens. Facial recognition towers were pulled down. Protesters used laser pointers to foil facial recognition. In an attempt to restore calm, Lam offered concessions. The protesters were not fooled. Finally, on September 4, she was forced to withdraw the law entirely.

It was a magnificent moment. It almost seemed as if genuine freedom fighters had faced down a superpower — and won. It was Red China’s nightmare.

But then came the COVID-19 pandemic. A paralyzed West began to realize the full dangers of the economic Gordian knot that intertwined them with China. China saw her chance, and rammed the regime-changing law through. Not even Carrie Lam was shown the details of the law before it was passed — just an hour short of the anniversary of Hong Kong’s handover.

Communist China has long been one of the world’s most brutal persecutors of Christians, and the crackdowns have increased in recent years. Pastors are vanishing into China’s vast prison system. Churches are being shuttered or, more often, demolished. Laypeople are being locked up in droves. Recent reports have indicated that Chinese police are being given arrest quotas for Christians. If the Communists get their way, Christianity will be domesticated or extinct. No torture is too vile to accomplish this goal. Despite that, current estimates indicate that 7% remain Christian. While Hong Kong’s Christian minority — 11.8% of the population — were protected by religious liberty laws, their brothers and sisters on the mainland face constant peril.

It is for this reason that so many Christian Hong Kongers joined the protests. Joshua Wong, a prominent Hong Kong freedom fighter featured in the 2017 Netflix documentary Joshua: Teenager vs. Superpower, is a Christian. During the summer demonstrations of 2019, the hymn “Sing Hallelujah to the Lord” became a crowd anthem. Many clergy joined, as well. Bishop Joseph Ha Chi-shing stated at the time that he would remain near the protesters to pray for them, as the “shepherd should not just be with the sheep but also guide them.” Hong Kong’s Christians knew that if China could extradite dissidents, they might well be among those who vanished onto the mainland.

Freelance journalist Alessandra Bocchi is one of the few reporters consistently drawing attention to the plight of Hong Kong’s Christians. I interviewed her last September after she returned from Hong Kong, and she told me that the protest movement was awe-inspiring. “I was very surprised because I’ve seen various protests in the Western world and I’ve never witnessed people singing Christian hymns,” she told me. “In Hong Kong, where Christians are a minority, where you don’t expect to hear hymns anywhere, you have them chanting. Thousands of them chanting, together, and holding hands. You see this collaboration with Christians, and they’re very active in their protest.”

With the new national security law in place, Christians fear they can no longer speak out about persecution on the mainland. If they do, they could well face it themselves for violating the ban on criticizing the Chinese Communist Party. In a recent report for National Review, Bocchi noted that the “main religious denominations in Hong Kong were summoned to a meeting at the Liaison Office in June, before the implementation of the law, and expressed support for the government afterward.” One Catholic lawyer told her that it is likely the churches are being monitored. Hong Kong’s Cardinal Tong, she noted, switched from supporting the protests to stating that the new law “doesn’t threaten religious freedom.” It was as convincing as anyone sounds when a gun is pointed at their head.

That said, Bocchi did note that a handful of Christian leaders have stood fast. These include the chairman of the Baptist Convention of Hong Kong, who was “reportedly forced to withdraw his statements to protect his church.” Auxiliary Bishop Joseph Ha, she wrote, had “previously supported the pro-democracy movement” but now has instead “urged his followers to carry crosses on the street.” Considering what is happening to Christians on the mainland, one wonders if that alone could be now classified as sedition.

In the face of all of this, a coalition of Hong Kong pastors, evangelical leaders, and theologians put forward a defiant open letter. According to Christianity Today, the letter features 3,500 signatories as of June 15 and rejects submission to an authoritarian regime. Additionally, the signatories restate their fealty to God above all:

The King of Heaven does not rule by controlling the world. Rather, He rules by showing His love and humble servitude. … Thus as the King of Heaven, His political blueprint is ‘to proclaim good news to the poor. He has sent me to proclaim freedom for the prisoners and recover of sight for the blind, to set the oppressed free, to proclaim the year of the Lord’s favor.’ (Luke 4:18-19)…

When facing the authority’s strong governance and the persecution and suppression towards the dissidents, churches often chose to protect themselves. They engaged in self-censorship and remained silent towards the evil deeds of the authority, with their only wish being the smooth and uninterrupted operation of church ministries. … The church is neither a political party or a political organization, therefore political agendas or demands should not become the main focus of the church. However, when facing injustice and evilness in the society, the church should act as the social conscience and fulfil [sic] its prophetic role to denounce injustice, to proclaim the will of God, and to bear witness to truth.

For years, many Christian churches in Hong Kong have kept a low profile, hoping to focus on their work while avoiding conflict with authority. But now, they may soon face restrictions similar to those of their brethren on the mainland. As this spectre looms, many are already displaying the courage they will need in the years ahead.

For as the pastors noted in their open letter: “[N]o matter how tough it gets, we shall hold onto our duty as the church to walk together with all Hongkongers, and to uphold Hong Kong ceaselessly with prayers and pastoral care, as a living testimony of ‘Emmanuel’ — God is here with those who are suffering.”