We must be careful not to stamp out the Constitution while stamping out COVID-19. 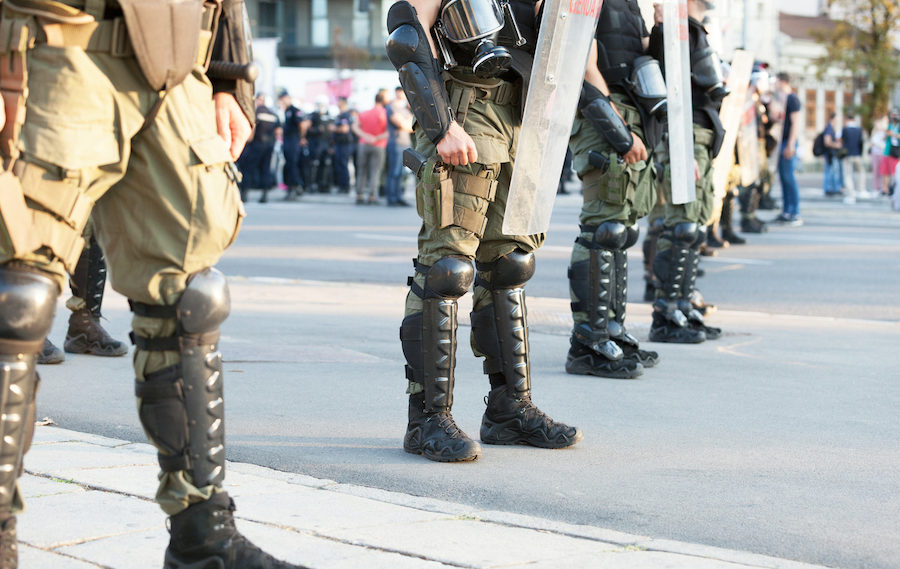 The government’s expanding its power as it deals with the pandemic. If it’s not already trampling civil liberties, it’s coming close. That may seem necessary, but it’s never good. Conservatives know that governments want to grow, and that they rarely shrink on their own. Once they have power, they don’t like to give it back.

State and county governments across America are requiring people to stay indoors and forcing businesses to shut down. The new powers should be temporary. But will they be? The government may end up making them permanent. This crisis may go on for a long time. And the nation will experience others. And we haven’t even seen new steps that may be taken within the next month or so. So why wouldn’t a government keep the powers it thinks it needs?

But worse, the decisions are based on who the government favors. And doesn’t favor. Like churches.

Against the Bill of Rights

Let’s look at the way government reads the first five amendments to the Constitution.

There’s the first, guaranteeing freedom of religion and the right to assemble. Abortion clinics are considered essential businesses. But in some places churches aren’t (some are still meeting because there’s not yet a ban on large group gatherings in their state or because they’ve been granted an exemption to emergency rules).

For example, Pastor Rodney Howard-Browne was arrested in Hernando County, Florida. He was charged with the misdemeanor charges of unlawful assembly and violation of a public health emergency order. Michael Moreland, director of the Ellen H. McCullen Center for Law, Religion and Public Policy at Villanova University, said, “So long as (group gathering) restrictions are neutral and applicable to everybody, religious institutions have to abide by them.” But if they’re picking and choosing what groups they apply to, then they’re not constitutional.

While it may have been inappropriate of the pastor to hold services after the order was issued preventing large gatherings, it could have been resolved without going so far as arresting him. The police could have showed up at the church and ordered everyone to leave. They could have fined the pastor. There were civil ways to address the issue, without resorting to treating him like a criminal.

Some localities have imposed curfews. Ordering curfews for healthy people may be trampling on the First Amendment right to free assembly.

There’s the Second Amendment, guaranteeing the right to bear arms. California’s Santa Clara County considers marijuana dispensaries “essential businesses.” They can stay open. But gun stores are not. They can’t stay open. What’s the difference? No one will explain.

The Fourth Amendment bans unreasonable searches and seizures. In Rhode Island, the police and National Guard are pulling over cars with New York license plates. They will be going door to door looking for New Yorkers to force them into 14-day self-quarantine. The White House has also called for New Yorkers who live in the state to do this.

Then there’s the Fourteenth Amendment. The law permits the federal government to impose quarantines for public health reasons. However, under the amendment’s Equal Protection and Due Process clauses, such conditions can’t be “arbitrary, oppressive and unreasonable.”

And also the Constitution’s Commerce Clause. Some constitutional scholars say President Trump could use it as authority to impose a national lockdown. Trump briefly threatened to quarantine New York, New Jersey and Connecticut last Saturday. The Commerce Clause gives the federal government the power to regulate commerce among the states.

It has been grossly abused to expand federal power over the years. In the 1942 case Wickard v. Filburn, the Supreme Court relied on it to rule that a federal act could prohibit a farmer from growing extra food on his farm for his own personal use.

Trump backed down. He had the CDC issue a travel advisory for the three states instead. It urges people to avoid nonessential travel for 14 days.

The private company X-Mode caused quite a stir when it tracked the smartphones of young people partying over spring break on Florida beaches. It mapped out across the country where they went when the partying ended, to show how they could have spread the virus.

The government is considering this in order to make sure people are staying at home. Governments in Italy, Germany, Austria, China, South Korea and Taiwan have already started.

The DOJ has asked Congress to allow it to petition a judge to detain people indefinitely without a hearing. This could take place for several reasons. One is if the courts are shut down. Norman L Reimer, executive director of the National Association of Criminal Defense Lawyers, told Politico, “I find it absolutely terrifying. Especially in a time of emergency, we should be very careful about granting new powers to the government.”

Surveillance May Be Starting

We saw a crackdown on civil liberties in recent years due to another big disaster, 9/11. Congress passed the Patriot Act, which allowed the government to collect citizens’ phone records among other things.

Lawsuits are starting over the drastic measures the government is taking. But judges can be all over the board on their rulings, and they authorized a lot of the Patriot Act. So there is a real fear we will see massive violations of civil liberties.

There’s no sign the pandemic will be slowing anytime soon. The earliest predictions are a month from now. So the measures being taken could get worse. Much worse. We may not be able to get back the Constitutional freedoms this country has enjoyed since 1776.