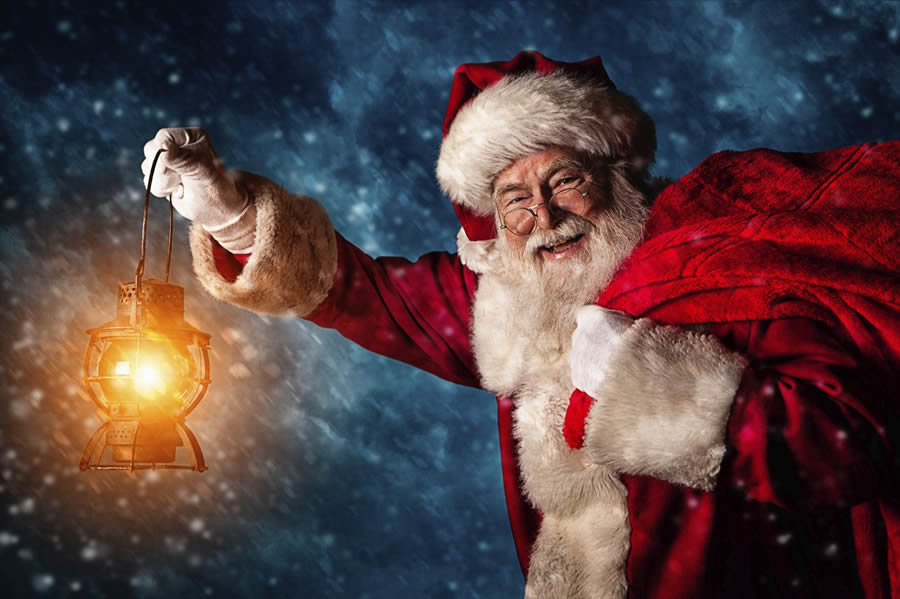 Suppose you had a vaccine you wanted to get to people quickly, to save lives around the world. You’d need someone with a tried-and-true distribution network, used to sending things out in a flash at the end of the year. You’d want someone who could have to fly high to keep the vaccine cold, preferably one who’s fine dealing with low temperatures.

The FAA would want them to emit a bright red light to warn other aviators. People aren’t always home, so delivery vehicles capable of rooftop landings would be optimal. Good customer service would be important, perhaps someone who could shed antivax skepticism with a friendly “Ho, ho, ho!”

Who you gonna call? Saint Bezos? Or Saint Nick? Do you think we’re blurring the boundary between myth and technology? Christmas has always done that. It brought the ultimate life-saving vaccine to people around the world. Carolers sing about “a savior” who “comes to make His blessings flow / far as the curse is found.” The curse that calls for a Christmas blessing is more universal than COVID-19. It is a sickness that leads to death, and we are all symptomatic.

Christians may not believe in Saint Nick, but we believe in his boss, whose blood provides the antibodies that overcome the sickness of sin and death. Rather than flying reindeer or Amazon drones, though, his delivery method is more organic and gradual, because it involves us.

When my son was small, he planted a noble fir sapling in the garden. In fifteen years, it has grown into a good-sized Christmas tree. Given centuries, such conifers become the monarchs of the forest. Jesus said the Kingdom of Heaven is like that. It is not a magical one-night sleigh ride, or even a multi-national with a million worker elves and an independent fleet of jets. Christmas is more like a vast tree that grows from a little seed over centuries, providing moral, social and intellectual habitat for the nations.

Vaccine science is a great example. Modern science itself developed in Europe for many reasons. Historians of science like Allan Chapman at Oxford, David Landes at Harvard, James Hannam, and the great sociologist Rodney Stark, say among reasons include Christianity’s view of the rational and worthwhile nature of creation. The faith also calls all to “give gifts” to all peoples, a charge that goes back to Abraham (or Adam), but whose full fruition really began on Christmas morning.

So vaccines were first developed in a society long nursed in biblical values, and equipped with technology also developed from within Christian civilization had developed, added to it the “corrective spice” of biblical charity, as Francis Bacon said it. (Oxford historian of science Allan Chapman is good on this.)

Europeans weren’t the first to think of inoculating people against diseases. The idea had occurred to people in ancient China, in Africa and the Middle East. In Europe it was found that milk maids, many of whom had had cowpox, were immune to smallpox.

Cotton Mather launched a crusade to inoculate the people of Boston during a small pox outbreak which killed 850 Bostonians out of a population of 11,000. (His African slave Onesimus had taught him the trick.) Not everyone agreed with him. One opponent launched a bomb through Mather’s window with the message attached: “Cotton Mather, you dog, damn you! I’ll inoculate you with this; with a pox to you.” A young printer of a skeptical cast of mind, Benjamin Franklin, also scoffed at Mather’s innovation.

In 1796 Edward Jenner followed these clues up with experiments and created the first vaccine for smallpox. Jenner’s vaccine, and the understanding derived from it, would ultimately lead to the end of this horrible disease, which had killed hundreds of millions or even billions of people. These experiments also led to vaccines for other diseases. Jenner, a pious believer, wrote, “I am not surprised that men are not grateful to me; but I wonder that they are not grateful to God for the good which He has made me the instrument of conveying to my fellow creatures.”

Louis Pasteur, a faithful Catholic, later proved the germ theory of contamination, which led to “pasteurization.” He also developed vaccines for rabies and anthrax.

This is how the tree of life branches out, bringing many gifts to the nations. It is hardly the only way, though. I am presently writing a book showing that Jesus has liberated billions of women (and the men they love) around the world. But that freedom we can use to bless or to curse. I just edited another book proposing a “Third Education Revolution.” The Church has educated entire nations in the past.

Christmas is coming. We tell children about Santa Claus for fun, hopefully with a wink and a smile. But the true Christmas has distributed healing to every nation by the natural growth of the Kingdom of God, with each believer a needle, a twig, a root, or part of the trunk on that tower in the forest. The world loves to talk about Santa Claus because a children’s story threatens no one. They hide the true story of how Mary’s little baby child spread grace to the world, because it challenges political correctness.

Followers of Christ, you, too, get to wear the Santa hat. But when you bring someone the “vaccine” of spiritual life, be careful how you ask, “Have you been naughty or nice?” Naughtiness is just a symptom of the disease. Jesus’ blood carries the antibodies to heal. And true virtue means being integrated into the tree which brings healing to the nations.

David Marshall holds a B.A. in “the Russian and Chinese Languages and Marxism,” an M.A. in Chinese Religions, and a Ph.D. in Christian Thought and Chinese Tradition. His most recent book is Jesus is No Myth: The Fingerprints of God on the Gospels.r

The COVID Vaccine is Not the ‘Mark of the Beast’