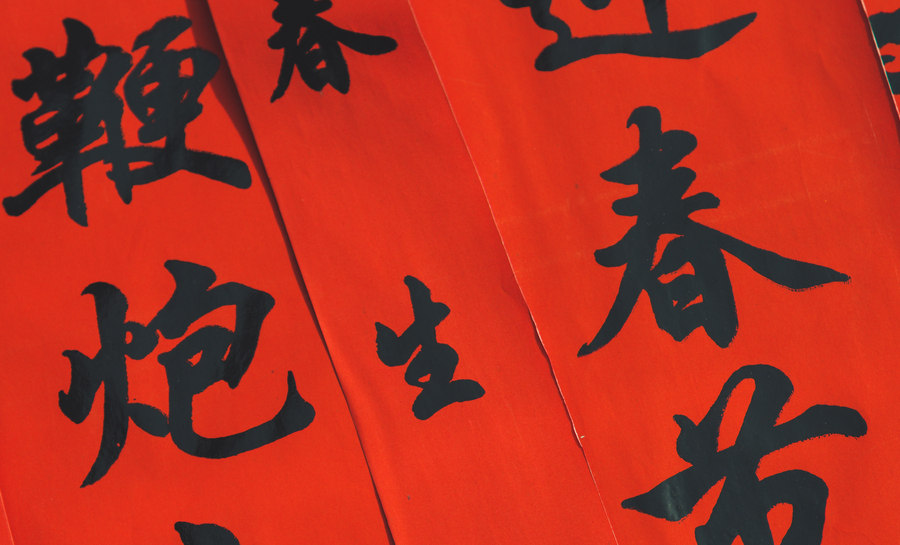 The Year of the Rat, or the Year of the Bat as it turned out to be, starting in Wuhan, is almost over. Another Chinese New Year is almost upon us, the Year of the Ox, which hopefully will drag bat-ridden plagues away, and plow up the field for something hopeful to emerge this spring.

Chinese sometimes explain this favorite holiday to me as “our Christmas.” I am tempted to reply, “Yes. Because that is the day you celebrate the birth of Jesus Christ.” But it is also a little like Easter, and a little like Passover. Anyway, the connections between Chinese New Year and the Christian Gospel are remarkable.

Red on the Doorframes

At Passover, Jewish families sprinkled blood on the door frame so the Angel of Death would “pass over” their homes and not harm anyone inside. Walk around a Chinese village after New Year, and you could swear Asian parents had the same thought. Bright red strips decorate the top and sides of every door, with gold, black or white characters written on them. (In the Qiang culture in the mountains of Sichuan, apparently it was the custom to sprinkle blood on doorposts.)

Legend has it that a monster called Nian, or “Year,” prowls the streets at New Year’s, so children must stay inside so it will “pass over.” Nian is afraid of the color red and of firecrackers. The Christmas story also tells of a monster who killed children: the historical villain, King Herod.

New Life From Above

Odd that holidays celebrated in fear of death bring hope for new life. But now the sun returns and begins to warm the land. Nurseries set out daffodils and hyacinths. Bulbs  send up shoots through the soil. In the foothills of the Himalayas, peach and plum trees begin to blossom, while further north, late winter rays cause them to bud tentatively.

Chinese New Year looks forward, like Passover and Christmas, to new life from above.

And whether their authors have known it or not, the strips of writing on door frames, called “spring couplets,” often point toward a salvation which is greater than just the renewal of life in the spring.

The man in this picture (see below) sold spring couplets at the train station 700 meters from my apartment in Shandong Province. Look closely at the third strip from left, and like the shepherds at Christmas, you may hear voices over your head. 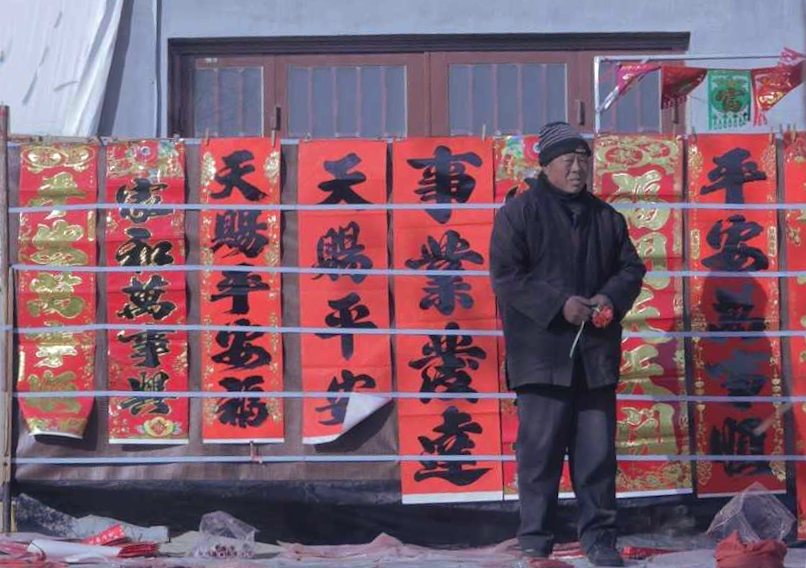 Reading top to bottom, the first character, 天, pronounced “tian,” means “sky” or “day” in modern Chinese. (Editor’s note: not all computers will display all the Chinese characters correctly. This is unfortunately beyond our control.) In ancient China the character often referred to Heaven, Providence, or God. This meaning most often found in the earliest Chinese writings, especially the Book of Poetry, the Analects of Confucius, and Lao Zi’s famous Dao De Jing, which western New Agers find mystical and not at all Christian.

The second character on this strip, 赐, means “give” or “bestow,” from a high superior to his subordinates.

With what does the poet wish Heaven to bless the family behind this door? Three things: 平 (ping), 安 (an), and 福 (fu).

God Give Peace and Happiness

The first two of these three characters both together and separately mean “peace.” Their formation is fascinating from a Christian perspective. Why does the first word for “peace” look so like a cross, with a person on either side, and a placard on top? Another Chinese character often seen at New Year draws this out: The traditional word for “come” (來) shows a man (人) on a cross (十) with another man on either side of him (人 人), as if it were saying, “All people (‘person person’) may come to God through the man on a cross.”) In this first character for “peace,” the two “people” are merely hinted at with slashes, but the suggestion is there.

The middle character (安) shows one woman, not two, three, or four, (女) under a roof. Both Jewish and Chinese practiced polygamy. But the history of both nations shows that hoarding multiple lovers is not the path to peace, and this truth is written into the Chinese language. In effect, this poetic line encourages us to find peace through monogamous love. Even Solomon admitted that “holding the one you love” (as the Blues Brothers put it) offers a better chance at harmony than his own Hugh Hefner lifestyle: “Enjoy life with your wife, whom you love, all the days of this meaningless life that God has given you under the sun” (Eccles. 9:9).

The final character in this strip, “fu” (福) or happiness, is the most popular character in the Chinese language. (Also in Japanese: it is part of my wife’s maiden name, for instance.) You even see it hanging in western gardens and plastered on the t-shirts of Americans with a taste for eastern exotica.

Happiness is formed of four “radicals” or word-parts: “venerate” or “reveal (示),” hinting at the divine, “one” (一), “mouth” (口), and “field  田.” (Two of those Chinese characters unfortunately failed to make the transition to this web page). This character may have originated as a picture of a sacrificial vessel, reminding us of a link between sacrifice, God, and happiness. That link was important in the ancient Book of Poetry, which was Confucius’ Book of Psalms. But since “mouth” can sometimes be a “measure word” for animals or people, one could also read this character as referring to the blessing that God gave Adam in the Garden of Eden: “one person in the garden next to God.” (Indeed, the Book of Genesis reads in Chinese, “God gave them fu,” or blessed them.)

Hope That Comes After Three Days

Chinese New Year is also called the “Spring Festival,” which is why one hangs “spring couplets.” The Chinese word for spring (春, “chun”) also contains what looks like a hidden message pointing to a Christian holiday we celebrate in spring.

“Spring” contains three parts, which read naively in modern Chinese (I am not saying this was how the character was formed), look like “three” (三), “days” (日) and “person (人).”

What happens to what person after three days in spring, that is associated with the hope of new life?

The Message of Spring

The Nestorian priest Jing Jing arrived in Xian in 635 AD and pointed to connections between Christian and Chinese history.

The Jesuit Matteo Ricci and his disciple, the high official and important Chinese scientist Xu Guangqi, explored the Confucian Classics and found God.

James Legge, the greatest Western scholar of those Classics, found Christ in the earliest Taoist classic, as well.

One of his friends, Hong Rengan, wrote the first full modernization program for China.

John Wu, author of the Chinese Constitution still in force in Taiwan, and his friend, the great writer Lin Yutang, turned to Christ as the fulfillment of a Chinese culture they loved, which was already under assault by Mao Zedong.

Arguably the three most esteemed rulers in Chinese history, Tang Taizong, Kang Xi, and Sun Yat-sen, spotted connections between Chinese culture and the Gospel, as well.

So I know that when I saw Christianity reflected in these Chinese saying, it wasn’t because I’d hit my head getting off too many buses in mountain villages.

Spring couplets leave a bright impression with their splashes of red on doorposts, and the remarkable meaning to be found in their individual characters. Read as a whole, though, spring couplets often sound so Christian I am amazed to find them on the door of pagans. (Sometimes, ironically, next to more consciously evangelical spring couplets over the entryways of Christian homes next door, as in one case behind the train station pictured above.)

“May the rivers and mountains of ten thousand miles again see fortunate days!”

Twenty-five years ago this month, my first book told “How Jesus Fulfills the Chinese Culture.” As a relatively young American explaining the secrets of Chinese culture to those who knew it vastly better than I did, I wonder now at my youthful audacity. (Though that is an updated version.)

But then I analyzed the Chinese Classics for my doctoral dissertation, and found Jesus awaiting in even deeper layers of Chinese culture. Nor was it just a personal delusion. I also showed how great Western and Chinese thinkers who changed history, recognized some of these coincidences as well.

Speaking to young missionaries in an ancient Hakka village outside Hong Kong, I thus challenged them: “You want to share the Gospel with your neighbors? Walk around these back alleys and look! The message you wish to preach is plastered on doorways all over this town!”

In the Year of the Ox, do you fear growing Chinese power? The persecution of Christians and Muslims? Cameras reporting every facial twitch to Big Brother? The rise of Neo-Marxist Cancel Culture in America?

Chinese New Year brims with the sights, sounds, tastes and smells of the past. Xi Jinping would probably cancel New Years, too, if he could.

The White Witch in C.S. Lewis’ Chronicles of Narnia also came to destroy. She knew that she was allowed, as an agent of entropy, to shed the blood of a sinner. But she didn’t know the magic deeper than dissolution, than dormancy: that when an innocent was killed in a traitor’s stead, death would die. New Year reminds us that the Angel of Death will some day pass over, that life is waiting in the cool earth, ready to come bursting forth in glory.

So celebrate the Chinese New Year, a reminder of a hope no enemy can defeat.