The Brew: More Classified Stuff in Biden’s Crib, More Thoughts From the March for Life 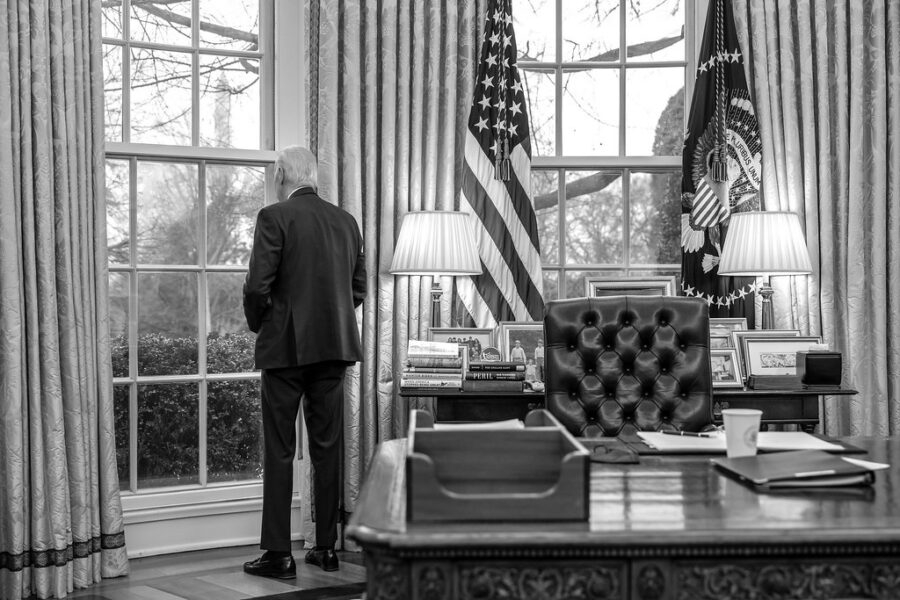 Joe Biden watching it all slip away?

And a crazy Monday it is, with the Biden classified documents scandal getting crazier … and bigger … by the day.

Classified documents keep turning up at Joe Biden’s Wilmington house like hookers in Hunter’s rolodex. The FBI spent nearly 13 hours Friday searching the joint, and came up with even more classified material. How much? Biden’s lawyers are being dodgy. They say “six items” containing classified material were discovered. Were those items folders? Boxes? Cabinets?

You’d think after Friday’s discovery, the FBI would immediately move on Biden’s Rehoboth Beach home. After all, his lawyers had assured us they had checked both houses and only found classified material in Wilmington. Should be a no brainer. But alas, according to Fox News, DOJ is merely “considering a request” to search the beach home.

Joe Biden says he has “no regrets” about any of this. And there’s “no there there.” Which is amusing because he also says he has no idea what exactly these classified documents are.

Meanwhile, Chief of Staff Ron Klain — believed by many to be the one actually running the country — is reportedly “stepping down.” A rat leaving a sinking ship? Or is he being set up as the fall guy for the scandal? More on that below.

There’s so much breaking with this scandal I had to put it into its own article. Please check out “‘What, Me Worry?’ Still More Classified Documents Found in Biden’s Wilmington Home.”

Sunday we saw additional signs the Biden reign of error might be in serious trouble. For example, the powerful Democratic Senator Dick Durbin expressed on CNN his frustration with the new revelation.

“To think that any of them ended up in boxes and storage in one place or the other is just unacceptable.”

“Let’s be honest about it,” said Durbin. “When that information is found, it diminishes the stature of any person who is in possession of it because it’s not supposed to happen. Whether it was the fault of a staffer or an attorney, it makes no difference. The elected official bears ultimate responsibility.”

But of course liberals are going to lib.

Democrat Sen. Dick Durbin is shown his own past comments saying it's "a literal outrage" for a president to store classified documents at his home.

DURBIN: Well no this is different pic.twitter.com/AOd6J9NMya

One more little thing. Maybe not even a thing. But you see the featured image from my article and this Brew? They’re from the White House Flickr account. Maybe it’s just coincidence, but if you scroll through you’ll see a lot of recent shots featuring Kamala Harris. Almost as many shots as there were at the start of the administration. But for months before that, very, very few shots of Kamala. Do the folks in charge of the account know something we don’t?

During Biden’s COVID response the nation suffered continued unnecessary lockdowns that destroyed countless business and wrecked the test scores of millions of kids. Vicious vaccine mandates that continued through Biden’s second year, cost not only thousands of good people their jobs, but the military many of its finest. Airline mandates wrecked our aviation industry, leading to shortages, delays and cancellations.

And the vaccines and boosters that this Administration continues trying to force on the public, has resulted in a growing death and injury toll. A toll that the Biden Administration has generally ignored, with the CDC only tip-toing into acknowledging the truth of what many experts have been saying for two years.

Experts who were silenced by this administration tag-teaming with Big Tech to shut down anything that went against the White House and Fauci messaging.

By any reasonable measure, the Biden Administration COVID response has been a failure. A disaster. You’d think whoever was in charge of the response would be shown the door. Not with the Biden White House. He’s getting a bigger office.

Jeff Zients, the person Joe Biden had put in charge of the Administration’s COVID response, is set to be promoted to White House Chief of Staff, multiple outlets are reporting. He’ll be taking the place of Chief of Staff Ron Klain, or as some call him “The Real President.”

Remnants from the March for Life

Sunday marked the 50th anniversary of the Roe v. Wade decision. Around 200 locations across the nation, pro-abortion protesters gathered to bemoan the fall of that dreadful decision, and vow to fight at the state level to protect the right to children up to and including after birth.

Two days earlier, tens of thousands gathered in Washington, D.C. and countless more at sites coast-to-coast at the 50th March for Life to celebrate the overturning of Roe, and to make the case for life. And love.

I was blessed to attend (if cursed with ratty cell reception and spotty battery), and got down my reflections on the event. You can read my report here.

I left out a few amusing notes. Like the snarky, jaded … but actually pretty funny AP photographers/reporters huddled on the steps of the National Museum of Art above  the start of the March. You got the impression they were looking down at the massive swarm of enthusiastic pro-life faces with the bemusement of those watching the Purina Puppy Bowl.

And how could you not adore a group called “Professional Bikers for Life”? Not just bikers, but professional bikers?

Then there’s the setting.

The National Mall has hosted countless political events and causes over the decades. How can you not look toward the Lincoln Memorial and think of Rev. Dr. Martin Luther King, Jr. delivering his “I Have a Dream” speech.” Or look up toward the U.S. Capitol and not just of J6, but of the dozens of presidents sworn in on her steps, their supports spreading out on the Mall before them. Or feel the heart tug of spectacular 4th of July gatherings with hundreds of thousands of near-and-dear Americans to watch fireworks burst above and behind the Washington Monument. Recalling a time when we were not red or blue, but all red-white-and-blue.

Yes, times have changed. But in a wonderful way they have not. I’m thinking of the D.C. swag hustlers who are as much a fixture at these political and cultural events as signs and banners. On Friday it was fun seeing them out in force peddling pro-life hats and shirts and buttons with impressive fervor … knowing that on Sunday those same people would be at the pro-abortion protests at Supreme Court peddling pro-abortion swag with equal passion. I don’t know how they do it, but I bet that if today someone announced a rally tomorrow to ban pickles, they’d be out there with shirts, “Support the Bill to Ban the Dill!”

Oh, the day was not without its ugliness. I also left out the part about the scant counter-protesters at the Supreme Court Friday chanting at kids from Catholic schools and children from churches, “Your Lord is ****.”

And please pray for the sad soul clasping a sign reading “**** the Cis-tem!”

The left showed more outrage this week because an NHL player didn’t wear a rainbow before a game than they did for two men pimping out their kids.

Buffalo Bills safety returned to Buffalo’s Orchard Park Sunday for their game against the Cincinnati Bengals. He and his family watched on from from the warmth of a stadium suite. CBS couldn’t resist cutting to shots of the suite … despite the snowfall making a mess of the shots.

Shortly before the end of the first half, with the Bengals at 1st and Goal, Hamlin rose to rev the crowd up. The Bills held.

The milking of the Demar Hamlin story by CBS during the game became a little too much for some.

Have a great week!