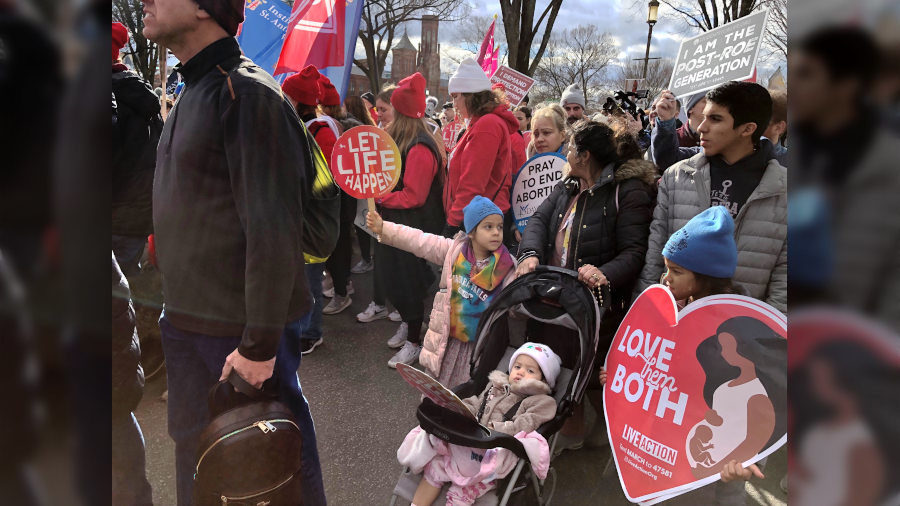 My muscles ache from my first March for Life. Yet nothing like the ache of those who, for 49 previous years, walked this walk. Marching down Constitution Ave. circling the U.S. Capitol and passing before the Supreme Court. Praying for the Court. A Court which 50 years ago this Sunday passed down the legally dubious, spiritually disastrous and unfathomably deadly Roe v. Wade. I have no reason to complain about my aches, compared to those who have spent decades in the fight for Life.

Those, like my wife Rusty and Stream colleague John Zmirak, who took on the battle when the crowds were small and the odds long. 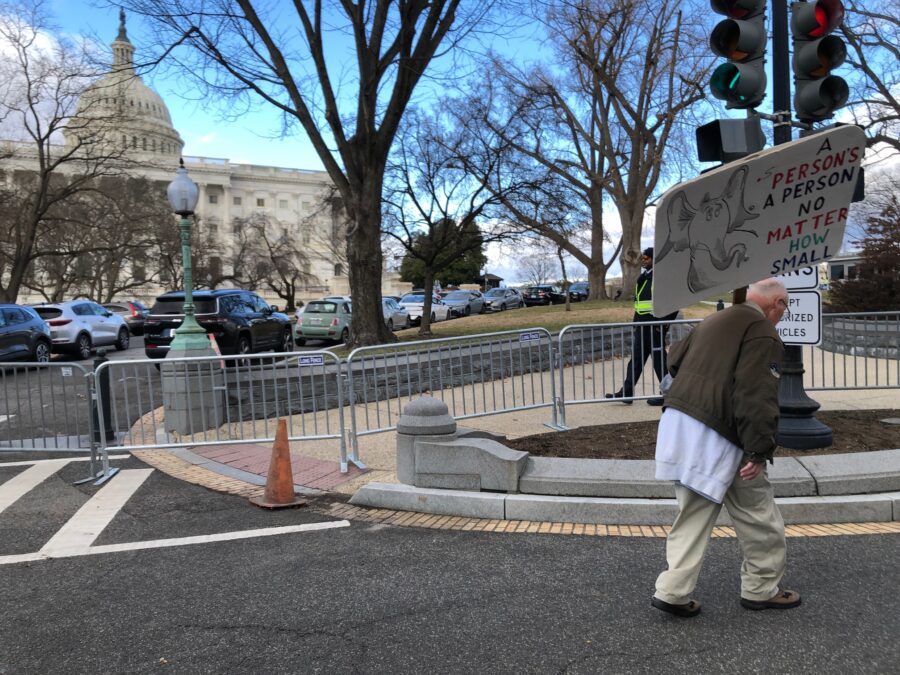 I spotted a bearded, weary, elderly man man carrying up Capitol Hill a sign straight from Dr. Seuss: “A person is a person no matter how small.” He staggered a bit, but he reached the hilltop. The promised land. To stand before the Supreme Court, where less than seven months ago, Roe fell. After half a century, Roe fell.

Ah, the youth. This year’s March for Life had its official theme: “Next Steps: Marching Into a Post-Roe America.” But hanging out around a massive crowd of predominantly teens and young adults, a more accurate theme might be found on the signs and shirts and banners reading: “We are the Post-Roe Generation.”

Tens upon tens of thousands of young people, with their school groups, church groups, family groups, with the enviable pep in their step, and voices still rich and full even after an hour rally and long march.

We’ll talk more about the young women and girls in a bit, but a quick hats off to the young men. Like Josh here, from Virginia Beach, enjoying the rally from his perch. 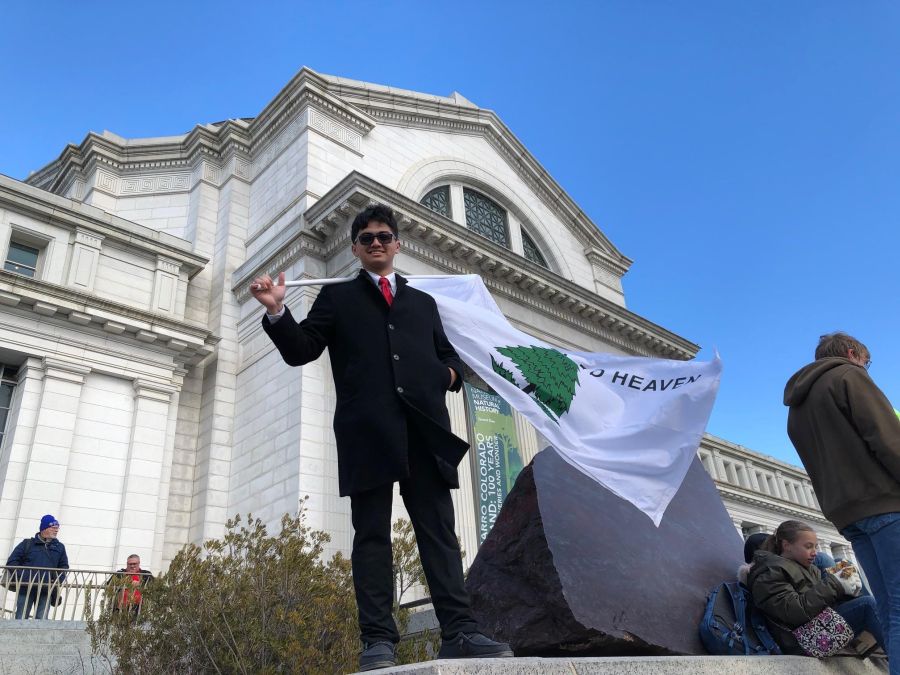 Josh from Virginia Beach, enjoying his perch overlooking the rally and start of the March for Life 2023.

(Hey, Josh. Hope the crotchety guard wasn’t too harsh when she got around to commanding you to get down.)

The Men of the Cloth, the Brides of Christ

Catholics were the engines behind those first Marches for Life. (For that the rest of the Body owes a tremendous debt of gratitude.) Although the crowd this day was much more ecumenical, the National Mall and streets were dotted with groups of priests, seminarians and nuns. Catholic colleges were definitely represented, like the 400 or so students from Franciscan University of Steubenville, Ohio, and the University of Mary all the way from Bismark, N.D. 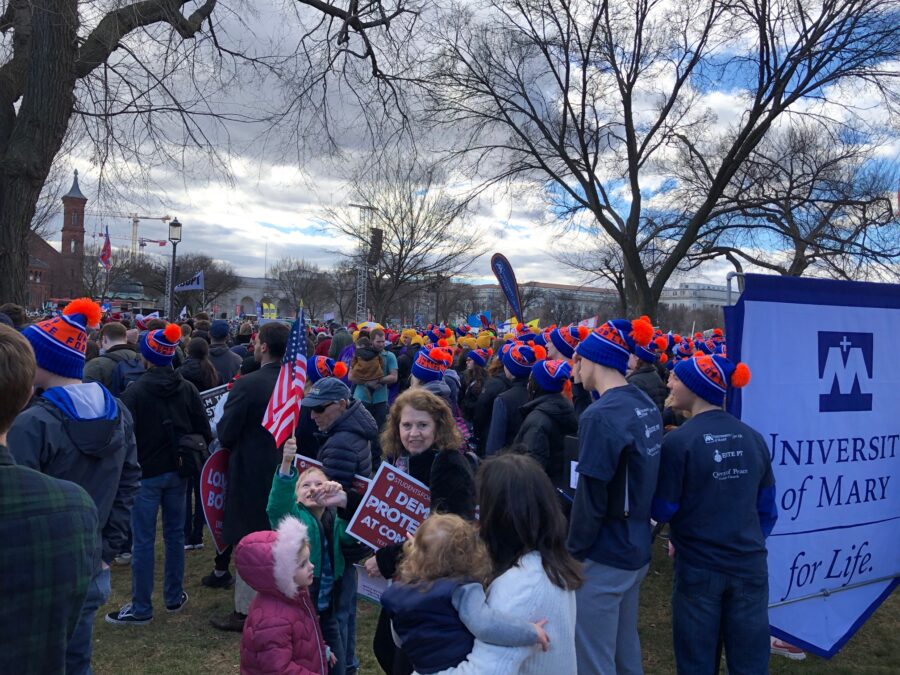 University of Mary students gather on the National Mall for the March for Life Rally.

On the evangelical side, Liberty University filled four bus loads of students, a proud mother was eager to report.

The U. of Mary students weren’t the only ones sporting colorful wool hats. One pressing visual memory of today is the multitude of groups sporting colorful wool pro-life caps. Neon orange caps, neon lime caps, purple caps, white caps, pink caps. Unity and utility, indeed. In a crowd your peeps would be easy to spot. And with temperatures in the 40s and a whipping wind, a very smart way to keep the ears warm.

Those winds built as excitement built for the March to start. A wind of change for our nation? Can I get an amen?

From the Steps of the Museum of Natural History 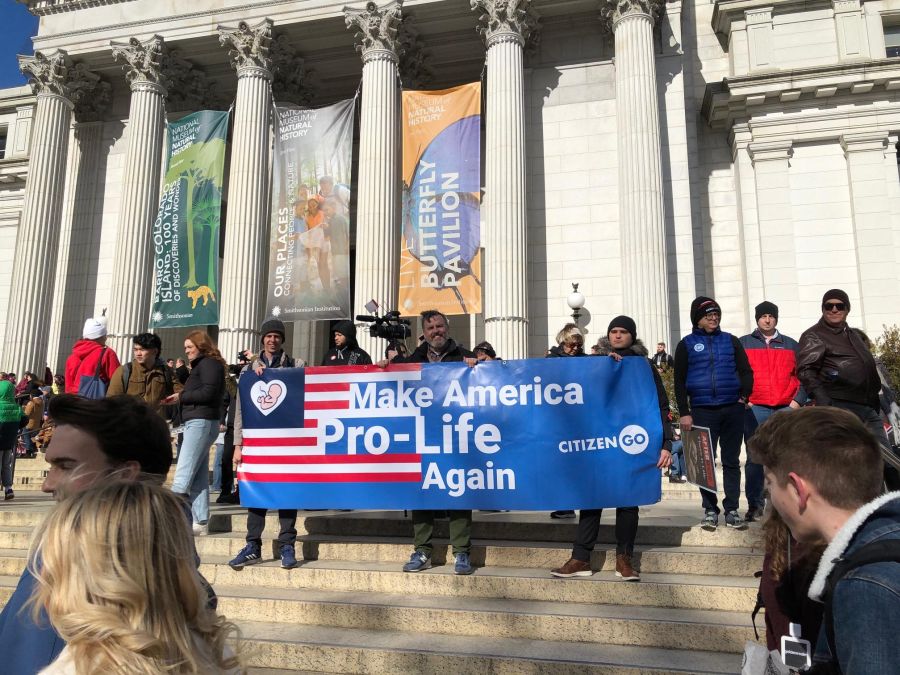 I awaited the kickoff of the March from the steps of the Museum of Natural History. What a natural place to be. After all, what is more natural than life? Than the wonder of creating life? But I am glad the Museum bore witness to the 100,000 passing by. We’ve heard a lot about “science, science, science,” in recent years.

And the truth was spotted on a yellow wool cap worn by a little girl about seven: “Science knows.” Science knows it’s a baby. Not a meaningless clump of cells. 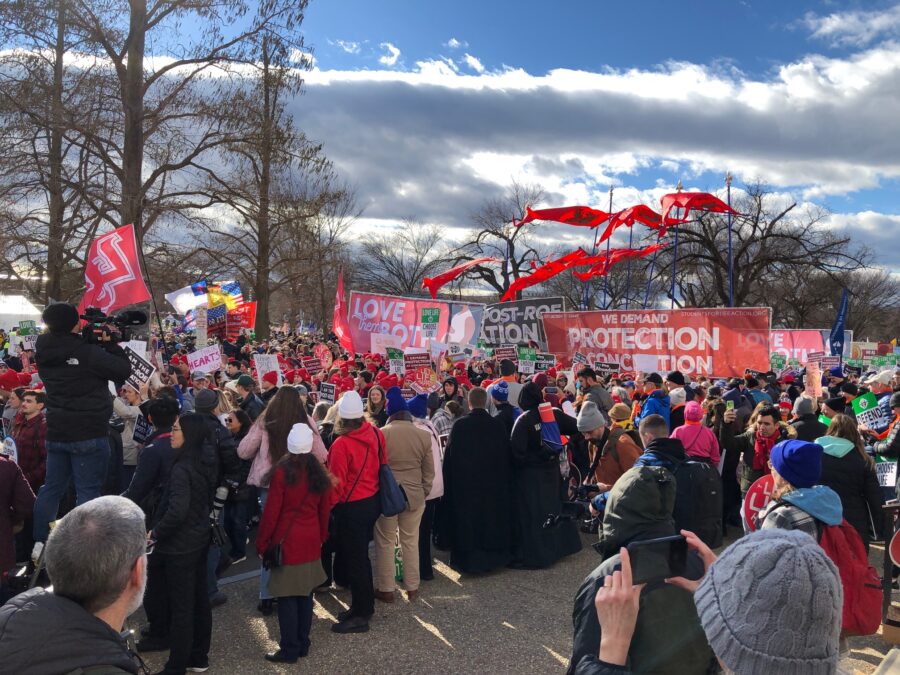 The National March for Life march gets underway, January 20, 2023.

Finally, arriving at the Supreme Court. 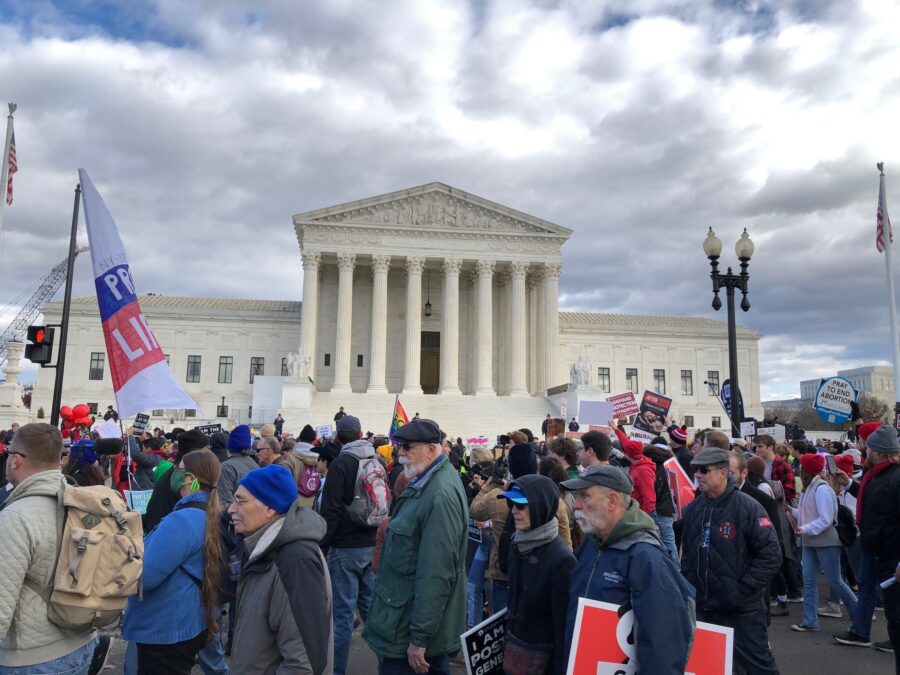 ‘We Are Not Yet Done’

We end with the words March for Life President Jeannie Mancini used to open today’s rally. “We are not yet done.” Yes, Roe‘s in the scrap heap next to the Dred Scott decision. But as the rest of the student chant went, “5, 6, 7, 8, now it’s time to legislate.” It’s time to double down and win legal battles at the state level. Time to double down to elect legislators both local and federal who grasp the fundamental right to life. Time to move aside politicians who take the sacraments, but stand idle as babies are taken apart.

Yet even perfect laws and pro-life politicians can’t change hearts. Think of the culture that declares “Shout your abortion!” That deploys poisonous Orwellian word games to call abortion “reproductive health care.” Think of the industry that deploys every trick in the book to seduce women and girls into its machinery of death.

Most of all I think of the peers of the girls and young women who marched. The souls who’ve been sold a lie, that abortion isn’t a shredding of life, but practically a rite of passage. That the child they may have in them is disposable. A hindrance to your success in life. Not even a precious child at all, but a hostile invader.

Yet after watching wave after wave of joyful, spirited young girls who do know better taking over the corridors of Washington, D.C., I grow more optimistic. They can win the battle of the heart. This “Post-Roe Generation” has some gumption.

We can do well to fall in.

So let’s take our Epsom salt baths, gulp down a couple Advil. For tomorrow, the March for Life begins anew.