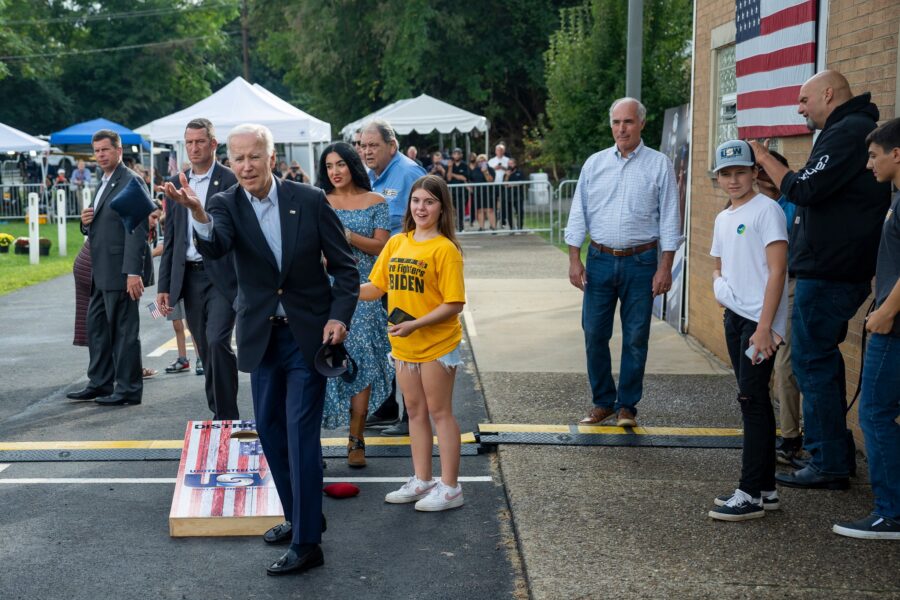 Yay! We made it to another weekend!

And with a Russian nuclear “doomsday” sub having up and vanished from its home harbor in the Arctic, making it to the weekend is a bigger deal than usual.

Would be nice if the sub showed up in a river in Maine, with Alec Baldwin and Sean Connery popping out the top. Another Hunt for Red October?

Speaking of Alec Baldwin, the actor has settled the lawsuit filed by the family of Rust cinematographer Halyna Hutchins, who was accidentally shot and killed by Baldwin on the set earlier this year. More than settle, the parties announced that filming on Rust will resume in the new year, with Hutchins’ husband as an executive producer with proceeds from the movie going to Hutchins’ family.

While we’re talking old movies that are timely today, we’ve got a cool article going up this morning from Fee’s Jon Miltimore: “Three Days of the Condor: The 1970’s Movie That Revealed Terror of the Real Deep State.”

WaPo: Feds Have Enough on Hunter Biden to Charge Him With Tax and Gun Crimes

Are the walls closing in on Biden Inc? Or is the wall just closing around Hunter to shield the Big Guy?

The Feds have enough evidence on Hunter Biden to charge him with tax and gun crimes. (Well duh.) According to the Washington Post, “federal agents investigating President Biden’s son Hunter have gathered what they believe is sufficient evidence to charge him with tax crimes and a false statement related to a gun purchase.” (The WaPo story is behind a paywall. Just the News has a summary.)

They made the determination “months ago.” The FBI is just waiting for the Department of Justice to decide whether to prosecute.

Now, given the evidence on Hunter’s laptop of widespread international influence peddling involving Joe, to say nothing of former business partner Tony Bobulinsky turning over mountains of evidence pointing to not only the influence peddling but downright fraud, and the Treasury Department flagging countless Biden international transactions as suspicious, it’d be curious to see if the Feds stick to just some unpaid taxes and a weapons charge. In other words, focus on Hunter and not the bigger Biden, Inc. schemes involving China, Ukraine and elsewhere.

In fact, the leak about taxes and guns comes two days after Bobulinsky’s powerful interview laying out not only the Biden syndicate, but how the FBI was given the proof, promised to be in touch, and he hasn’t heard from them since.

Also, it’s a bit curious the Post broke the story just one day after Joe Biden was “caught” on a hot mic saying “Nobody f***s with a Biden.” A warning to DOJ knowing the story was about to break?

A bit of history we’ve mentioned before. The day Trump sewed up the 2016 nomination, FBI lovers Lisa Page and Peter Strzok texted about how there would now be enormous pressure to wrap up the Hillary investigation. Within 24 hours, Page, the FBI’s White House liaison, was at the White House for a meeting about the case. Later that very day, the WaPo posted a story saying the Feds didn’t think they had enough evidence that Hillary intended to harm national security with her illicit email arrangement. That’s not the law, but is precisely what Obama had said in an interview just weeks before.

Now, as government cover-ups go, this is small potatoes. But it does signify the Swamp mentality. Did you know Kamala Harris was involved in a car accident Monday? Probably not. Seems the Secret Service was driving her through a tunnel in D.C., and the driver for some reason “overcorrected” on a curve and slammed into the curb, damaging the tire to the point it had to be replaced as the VP was whisked to the White House in another vehicle.

However, the Secret Service only reported to their bosses that the vehicle had a “mechanical failure.” Other agents later told the Secret Service Director what really went down. Plus a TikTok video emerged from witnesses to the crash. (WARNING: Video contains foul language). So the game was up for Kamala’s detail.

Meanwhile, kudos to Not The Bee for the final line of their article about the accident: “What if she tried to grab the steering wheel??” (A callback to the false J6 committee allegation that Trump tried to grab the wheel to get the Secret Service to go to the Capitol.)

A Federal appeals court has ruled DACA — the Deferred Action on Child Arrivals — illegal. Not really a surprise. President Obama knew that usurping Congress to create a new class of protected immigrants (the Dreamers) was unconstitutional when he did it. (But what’s the Constitution when you’ve vowed to “transform America”?) Biden must have heard him say it.

Still, Biden blasted the decision. (So much for respect for the judiciary. Doesn’t that undermine democracy?) More bizarrely, he blamed “MAGA Republicans” for the 5th Circuit Court’s ruling.

Then again, compared to searching the room for dead congresswomen — or slowly backing away from the press like they were ticking time bombs — “bizarre” is a relative term with Biden.

Joe Biden: "But it is a disappointment and there are problems."

Reporter: "So how about unleashing American energy?"

Some suggest he was attempting a Moonwalk. Next up, in honor of the Green New Deal, the Electric Slide.

In all seriousness, it’s a good time to remember Trump tried to get Congress to codify DACA into law as part of his immigration compromise. In other words, make it right. But Democrats wouldn’t budge on the border wall. That deal would have made our Politically Incorrect Guide to Immigration book obsolete before its release. But it fell apart. Meanwhile, the Democrats have had the run of Congress and the White House for nearly two years … and no DACA legislation.

Hmmm. So maybe there’s an explanation for the backwards walk, seeking out dead people and shaking the hands of ghosts after all.

“No one should be in jail just for using or possessing marijuana,” he said in a statement. (What about for using crack while with Asian and Russian hookers that you helped pay for? But I digress.)

“There are thousands of people who have prior Federal convictions for marijuana possession, who may be denied employment, housing, or educational opportunities as a result,” Biden said. “My action will help relieve the collateral consequences arising from these convictions.”

This action is seen as a major step toward the Federal decriminalization of marijuana.

We end where we started. With concerns over a nuclear war or world war. John Zmirak has written an absolutely essential “Open Letter to Joe Biden From the Monarchs Who Started World War One.” He writes from the POV of three monarchs whose arrogance, hubris and folly brought about The Great War, and they’re watching as Biden treads the same road. It is fascinating, if harrowing. A must read … a must share … as in, send it to your representatives in Congress. Many — on both sides of the aisle — are sounding way too much like these long-dead leaders did. Their warning must be heeded.

The Morning Brew: Biden Toots, Baldwin Wants More Cops (on the Set), and a Plea to W Over Russiagate