The Brew: Kamala Misses Out on ‘Life’ in Her Pursuit of Abortion 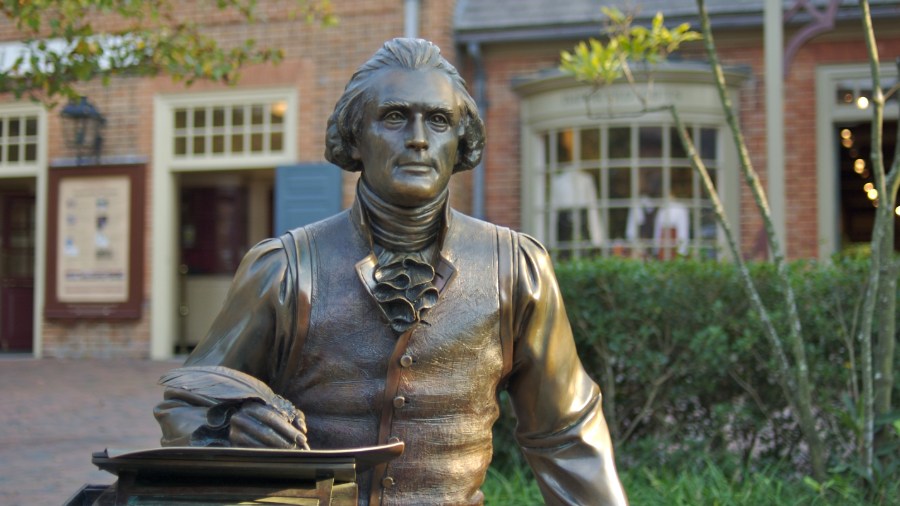 When Joe Biden misquotes the Declaration of Independence it’s out of dementia. When Kamala Harris does that, it’s malice.

Harris was speaking at a pro-abortion rally Sunday marking the 50th anniversary of the Roe v. Wade decision, when she invoked the Declaration.

We collectively believe and know, America is a promise … . It is a promise of freedom and liberty. Not for some, but for all. A promise we made in the Declaration of Independence, that we are each endowed with the right to liberty and the pursuit of happiness. Be clear, these rights were not bestowed upon us, they belong to us as Americans.

Forget something, lady? How about the first and foremost guarantee endowed us by our Creator (whom she also left out), “life.” You know, as in “Life, Liberty and the Pursuit of Happiness”?

It's no surprise Kamala Harris left God and the right to life out of the Declaration of Independence.

What’s worse? Having the audacity to leave out “life” when using the Declaration to push the anti-life position? Or having the stupidity to think nobody would notice?

Thomas Jefferson: “If a nation expects to be ignorant and free, in a state of civilization, it expects what never was and never will be.”

Mike Huckabee offers his thoughts on Harris’ sick slight and more in “Harris Rallies for Abortion in Florida.”

Oh, they were so hoping for a white shooter. But no, the guy who shot and killed ten people at a dance studio in the predominantly Asian community of Monterrey Park on Saturday night disappointed the left. They already had the “anti-Asian hate crime” motif working by Sunday. It turns out the killer was 72-year-old Chinese-born Huu Can Tran. And it appears a domestic dispute with his ex-wife is at the heart of the horrific attack.

They can’t help themselves. The bodies were not even cold and the suspect was still on the run when The New Yorker was out with “The Spectre of Asian-American Violence in the Monterrey Park Shooting.” On Monday — even after it had been clearly established that the attacker was Asian — out comes the L.A. Times with an op-ed called “Why the Monterrey Attack Feels Like an Attack on Asian America.”

Might as well put a sign on the wall. “We Don’t Serve Blacks (Who Aren’t on the Plantation).”

Fox News analyst Gianno Caldwell was tossed out of a restaurant in North Miami Saturday morning because the owner didn’t like his politics.

Happened at Paradis Books and Bread. Caldwall says he and some friends were in for breakfast and started talking politics. The white female cafe owner — we’ll say her name was Karen — was staring him down the whole time. The snowflake finally melted, tossing Caldwell and friends out because his politics “don’t align” with her or the shop’s.

I can't believe what just happened. I met up with friends for breakfast at Paradis Books and Bread in North Miami & while we were having discussions about politics we were told by the owner that we were not welcomed there because we aren't politically aligned. Outrageous.

The restaurant posted on their Instagram claiming that the party’s “behavior and their words made other folks in the space as well as the one of us working very uncomfortable.” To quote the great philosopher Moon Unit Zappa: “Gag me with a spoon.”

And what were those words that made the owner so uncomfortable? Caldwell recounted the incident on Sunday’s Fox & Friends.

They said, “Are you a conservative?” I said, “Yes. In fact, I have a book called Taken for Granted: How Conservatism Can Win Back the Americans That Liberalism Failed. You should get the book.'”

I talked to them about my brother. I was on Capitol Hill just the other week talking to members of Congress about violent crime in America and trying to get justice for my brother and other victims of violent crime.

This was so problematic to this lady that she told me that I needed to get out of her establishment. If this was not the Jim Crow South, I couldn’t tell how much of a difference.”

ANTIFA has been rampaging in Atlanta, since climate activist was shot and killed after getting violent with police. Six were arrested Saturday night as mayhem hit the streets. But CNN guest David Peisner isn’t batting an eye.

CNN Guest as a police car is torched on screen: "This idea that breaking windows…are the same as actual violence against humans is…a dangerous and slippery concept." pic.twitter.com/VkSbnJG2fK

“This idea that breaking windows … are the same as actual violence against humans is … a dangerous and slippery concept.”

Actually, quite the opposite is true. Yesterday, Stream contributor Dwight Longenecker offered a great article, “Why the Epidemic of Shoplifting.” He argues that theft (and in this case destruction) of property is an act of violence against the person. And it is the denial of that connection that leads to crime.

Atlanta isn’t alone in seeing renewed violence and anti-police protests. Boston police say they arrested “Jared Dowell” the other night for attacking a police officer during an anti-cop riot there. The officer was left bleeding. Dowell was charged with assault with a deadly weapon, destruction or injury of personal property, and damage of property by graffiti/tagging. The tagging? “ACOB.” Which is ANTIFA for “All Cops are B*******.”

Dowell is the spawn of House Minority Whip Kimberley Clark. Born male, Dowell is now transgender, and goes by the name Riley.

Last night, my daughter was arrested in Boston, Massachusetts. I love Riley, and this is a very difficult time in the cycle of joy and pain in parenting.

This will be evaluated by the legal system, and I am confident in that process.

Of course, Clark is confident. As others note, Clark is a powerful Democrat whose little domestic terrorist darling was busted in liberal Boston, and as a “transgender” is part of today’s most protected class.

Punishment? Yeah, there will be punishment … for the cops who dead-named Dowell.

“Transgender ideology cannot survive without censorship.” So wrote Nathanael Blake in response to Vimeo taking down the new documentary Dead Name. As Blake wrote in his review of the film for The Federalist, Dead Name “captures the pain and confusion of parents trying to protect their children from self-harm induced by an ideology that teaches them to despise their bodies.” Specifically, the 50-minute film follows three families through struggles and sorrows.

Dead Name was available from Vimeo since its release in December. However, the video platform axed the video Monday. “Gone, Baby, Gone” it says when you go to the on-demand link.

Vimeo has taken down Dead Name, which is an excellent documentary I reviewed for @FDRLST

Several articles praising Dead Name have posted in the past week. Christian Post writer Brandon Showalter, who appears in the film, observes that even those who have paid $14.99 already to buy the film can’t see it. “Just as this film was starting to gain some traction and moving people deeply because of its truly unique angle, POOF! Gone.”

Just as this film was starting to gain some traction and moving people deeply because of it's truly unique angle, POOF! Gone. Here's a great review from @NBlakeEPPC at The Federalist @FDRLST.https://t.co/92vSXbGCuy

The excuse for taking it down? You guessed it. “Hate Speech.”

Funny. The description that was on Vimeo read:

Dead Name, the indie documentary, is not fiery or provocative or slick or political. Rather, it’s an intimate portrait of three parents whose lives have been shaken and forever altered because their children have declared (or have been given) a transgender identity.

The irony? The film is not from a religious right winger. It’s from a secular leftist.

Newsflash, Vimeo: Being a slave to the transgender radicals and pulling documentaries that expose the dangers of their ideology in human terms will poison your business.

Woke destroys everything it touches. Earlier this month, Vimeo was forced to lay off 11% of its staff.

But let’s end with the good news. You can still see Dead Name. See what had the trans-Nazi activists so rattled. Producers have set up a new website where you can access the film. DeadNameDocumentary.com.

And more good news! A new episode of “Conversations With Christians Engaged” is up!!!! In this episode Bunni Pounds speaks with Kyle and Laura Martin of Time to Revive on “Cultivating a Life Like Him” … Him, of course, being Jesus Christ.

Payback for Progressives: Redefining ‘Rights’ Comes Back to Bite Them