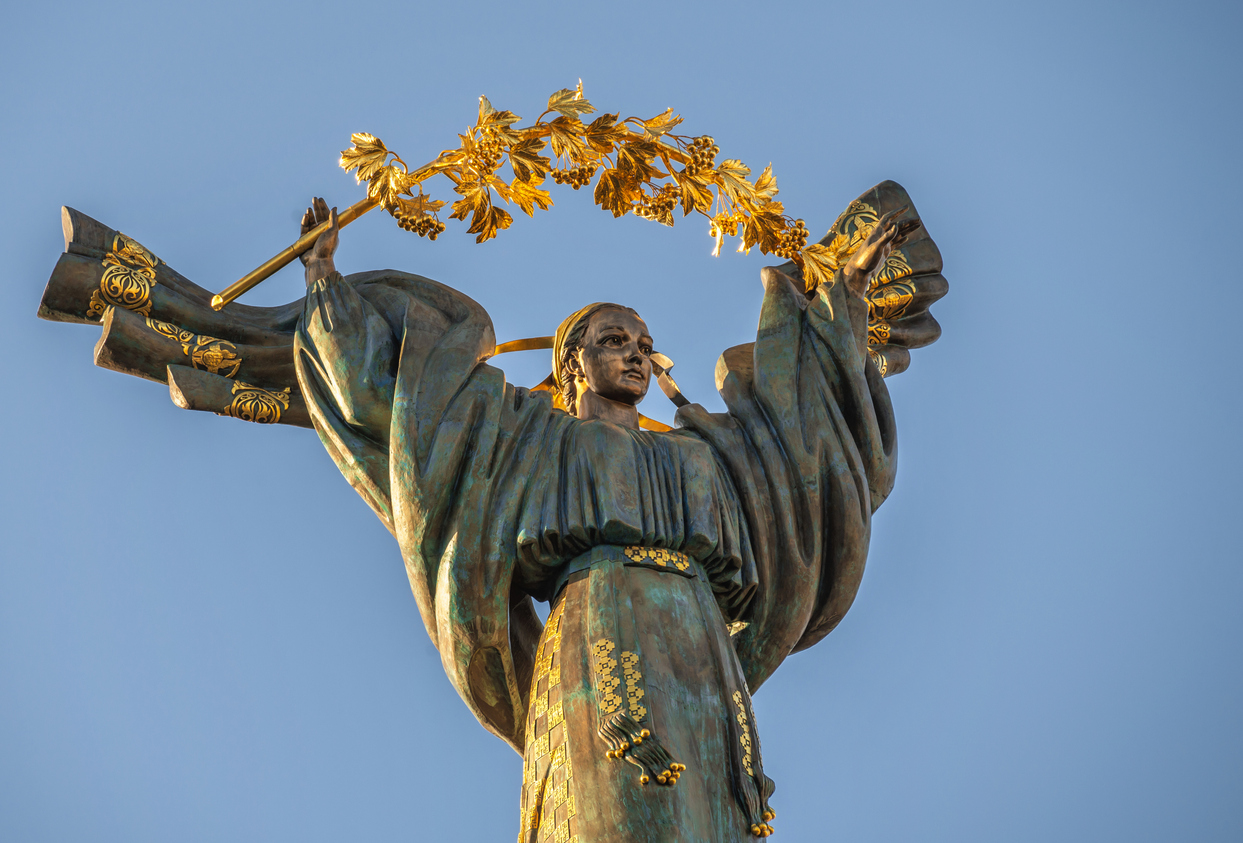 Kyiv, Ukraine 07.11.2020. Independence Monument on the Maidan Nazalezhnosti in Kyiv, Ukraine, on a sunny summer morning.

Every war is ugly, and on some level ought to be mourned. Even wars that were righteous, like the conquest of Hitler’s Germany, included bombs that hit hospitals. Or incinerated neighborhoods. Or killed families hiding in their basements, as happened in Dresden. The archetype of a just holy war, the First Crusade? It ended with a hideous massacre of Jews and Muslims in Jerusalem. That wasn’t unique to Christians or crusaders. It’s how pretty much every medieval siege ended: in rape and pillage.

An Unseemly Love of War

Hardly even a modicum of respect for civilian lives appeared in war anywhere on earth till the late 17th century (in the wake of the Thirty Years War). And that only lasted till 1918. Then we were back to massacres again — in the forms of “strategic bombing,” ethnic cleansing, and worse.

It’s unseemly for civilians on the sidelines to do a victory dance, as too many conservatives did during the “shock and awe” phase of our disastrous, genocide-enabling 2003 Iraq invasion. Even though I thought that war unjust, unwise, and reckless, I was tempted to take some pride in the size of our bombs and precision of our pilots. To chuckle as hapless foreigners scrambled away from our conquering troops. That’s just human nature. Which, as you can see, is deeply fallen.

It breaks my heart in particular to see Ukrainians suffer. On the most primal level, they are my fellow Slavs, as that’s my family background; and I feel a natural kinship for them. Why should Slavs be killing each other in wars like this, instead of … I don’t know … uniting against the Saracens?

More personally, I spent a lot of time in Ukrainian circles in New York City, and came to love those people. I prayed with them at St. George’s Ukrainian Church, and ate borscht with them at the Café Kiev. I’d go to the Blue and Gold Bar, sip vodka with the old folks, and play Ukrainian songs on the jukebox to bug the punk rockers. I remember a wizened old man who spoke very little English. When I put on an old Ukrainian fight song, his face lit up like a beacon. He said to me “During war, I was partisan!” then he mimicked using a machine gun. I remember thinking, “Well, he was either killing Communists or killing Nazis, and both deserved it.”

A Nation on the Cross

But Ukraine didn’t deserve the fate it met in the 20th century. Read Timothy Snyder’s epic Bloodlands for the heart-shattering story: The region of Europe beginning in today’s Western Poland, reaching north to Estonia, East to Minsk, and south to Odessa, was nailed to a cross in 1914 from which it only came down in 1990. Those regions started off in the 20th century as wonderfully diverse patchworks of Orthodox, Catholics, Protestants and Jews, speaking perhaps a dozen languages. Despite historic tensions, those peoples mostly lived in peace under traditional Christian monarchies.

But modern ideologies of racialism, socialism, and ultra-nationalism were unleashed after World War I. Militias of far-right or far-left bigots, and conquering armies, rampaged through the Bloodlands, burning and killing and purging. The next 70 years saw almost constant ethnic and ideological conflict, until those patchworks … were gone. So were uncountable tens of millions of civilians. The Catholics and the Orthodox ended up in separate countries. The Protestants got shipped back to Germany in 1945, and the Jews ended up in death camps. Everything was neat and tidy, the old diversity drowned in oceans of innocent blood.

Ukraine, Poland, and Belarus suffered the worst, from the Russian Civil War to Stalin’s artificial famine, then Hitler’s Holocaust, then still more ethnic cleansing by Soviet satellite nations after the war. And they spent the next 40 years in the Communist prison house of nations.

So when a quirk in the Soviet Constitution gave Ukraine independence in 1991, I was exhilarated. Sure, it had been part of Russia for hundreds of years, and Kiev was the birthplace of Russian orthodoxy and nationhood. But a Russian-led regime had starved some 6-12 million Ukrainians to death, so maybe those people were better off in a country of their own — as the Jews deserved a homeland. When the first film came out of a post-censorship Ukraine, depicting the great starvation Stalin imposed, I ran out to a tiny art theater to see it. I have since shown it to my class of college students. You should watch it, too. It’s called Famine 33.

Ukraine should have had a chance. Ukrainians deserved a shot at self-determination, like the Poles and Czechs and Latvians. And now it appears that that’s over. And I want to weep, for all the victims in Ukraine through the past 100 years, and for those brave survivors whom I knew back in New York City.

Demonize the Russians, But Don’t Blame Our Leaders

Vladimir Putin’s Russia will no longer tolerate an independent Ukraine in any form, I suspect. And why? Because Putin is some kind of demon, who fixed the 2016 election, who still believes in Communism, who maybe roasts babies for breakfast? Because Russians are just Neanderthal authoritarians, against whom we must be forever vigilant? That’s the mainstream take, peddled by both warmongering dominant factions, the globalist Clintonite left and the neocon Bushie right. Democrats want to punish Russia because it’s not pro-gay enough. Republicans because they like feeling tough but have investment holdings in China.

But Ukraine didn’t die because of Russian bad guys. It died because of U.S. foreign policy, run by those same two groups here in America from 1989 till 2016. They, far more than Putin, made this present war inevitable. They used Ukraine as a crash-test dummy, then walked away from the wreckage. Those of us who love Ukrainians should bitterly resent every one of these cynical, short-sighted, Machiavellian bumblers. Each of them, on the left and right alike.

Pedro: “Their liberal internationalism got us into this mess, and not one more person should die to it. But they’re welcome to go to the front lines if they wanted.” pic.twitter.com/4esYxKbU7G

Why do I say this? Let me pose some questions first, and then I’ll offer my answer.

Ukraine had a chance to survive. But our leaders, from both factions of our War Party, helped snuff it out, stomp on it, and cover its grave with dirt. Ukraine inherited from the Soviets an array of powerful nuclear weapons. I remember how thrilled I was when I learned of that. Like Israel, the nation had endured a Holocaust. Like Israel, it deserved the ultimate weapon of self-defense.

But Bill Clinton went to Ukraine and convinced them to sign away that birthright. For what? A promise that America would go to war with a nuclear Russia to protect it. No, they shouldn’t have believed such an outrageous promise, as empty as Clinton’s wedding vows. But we shouldn’t have made it.

We didn’t want Ukraine to have the means to protect itself without us. The foreign policy geniuses of both parties wanted to use Ukraine, to toy with it, to treat it as a base from which we could taunt and provoke the Russians. The Russians make handy villains, in everything from Hollywood action films to campaign collusion hoaxes and presidential impeachment trials. People who are terrified of poking the Chinese can talk tough by bashing Russia.

We always knew that if things went south, we could just walk away. Ukrainians can suffer. God knows they’ve had lots of practice.

Let’s pray that this war ends quickly with as little bloodshed as possible, and that the rights of Ukrainians will be protected under the Russian government — which will rule them for the foreseeable future.

Our leaders have made sure of that.