The Brew: Getting Inside Lady Liberty’s Head 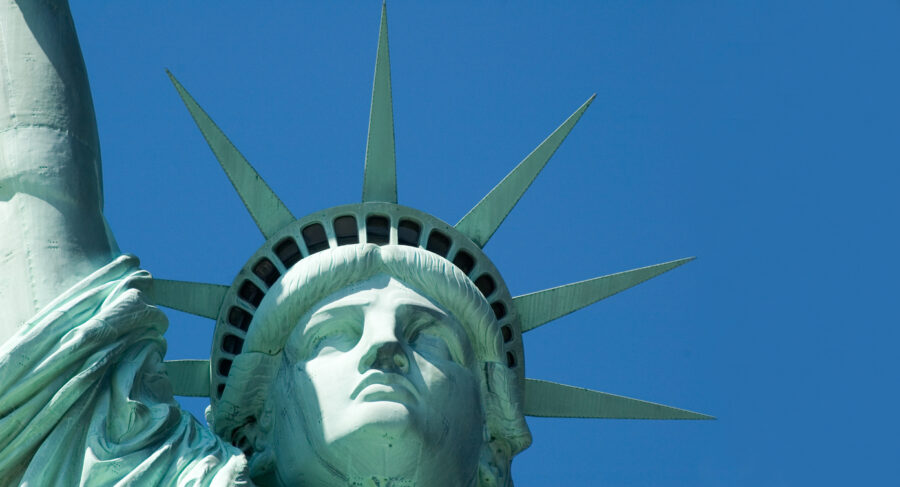 Ever Want to Get Inside Lady Liberty’s Head? You Now Can for the First Time Since COVID

For the first time since COVID’s unwelcome arrival on our shores, tourists can go into the crown of the Statue of Liberty. NYCGo tourism group made the announcement Tuesday.

Now if only you could get to Liberty Island without needing an armed guard and a squad of protective angels.

If you’ve been wondering why Tulsi Gabbard still called herself a Democrat, wonder no more. The former Hawaiian congresswoman announced Tuesday that she’s leaving the Democratic Party. In a 30 minute video, Gabbard pulled no punches.

Two years after running for the party’s nomination, she described the Democratic Party as an

elitist cabal of war-mongers driven by cowardly wokeness, who divide us by racializing every issue & stoke anti-white racism, who actively work to undermine our God-given freedoms that are enshrined in our Constitution, are hostile to people of faith and spirituality, demonize the police and protect criminals at the expense of law-abiding Americans, believe in open borders, weaponize the national security state to go after political opponents, and above all, dragging us ever closer to nuclear war.

Gabbard did not indicate that she would be joining the Republican Party, but urged other Democrats fed up with the ideologues to similarly walk away. Tulsi announced her departure on the premiere episode of her new podcast The Tulsi Gabbard Show. See it on YouTube and Rumble.

L.A. City Council member Nuri Martinez stepped down as president of the council after audio was leaked of her uttering a series of racist remarks, particularly a cruel, racist jab at the black son of a white fellow council member.

… just not enough remorse to resign her actual council seat.

What makes the story of particular note is Martinez is one of those progressive liberals with a history of calling America (and Donald Trump) racist, as Fox News noted.

Accusation: Sen. Raphael Warnock Blasted Evictions, But is Getting Thousands From His Church Who is Trying to Evict Delinquent Tenants

What’s that bit in the Bible about being double minded? Georgia Sen. Raphael Warnock is a pastor by trade. The Washington Free Beacon reports that at the same time Warnock is running around blasting tenant evictions, the church that pays him thousands each month is pushing to evict low-income tenants from a building it owns.

Unemployment benefits have expired, rent is due today, and many Georgia families are at risk of eviction in the middle of a pandemic.

My opponents are supposed to be serving the people in Washington, but they're clearly only concerned with serving their own interests

One person is being threatened with eviction for having $28.55 past due rent.

Like the star running back he was, Warnock’s opponent Herschel Walker saw the gap and hit it. He is offering to pay the $4500 back rent of those impacted.

I have never known a preacher that likes abortion even after birth, won’t pay his child support and evicts poor people to the street. I will pay the $4500 in past due rents listed in this news article to keep @ReverendWarnock from evicting these people. https://t.co/IqSBIWUnLU

Boy, that race down there in Georgia is a nail-biter.

If Katie Hobbs dodged tacklers the way she’s dodging a debate with Kari Lake, she’d be leading the NFL in rushing. Hobbs has come up with another excuse that is simply epic. Hobbs told Face the Nation she can’t debate Lake because her schedule is “pretty much set.’ C’mon. How long does it take to cash those checks from Soros? Never heard of mobile deposit?

Yeah, I know there’s a lot more to being a governor than debating. But isn’t half the fun of going into politics arguing with people with different opinions … and getting paid for it?

Seriously, in that same Face the Nation interview, Hobbs seemed to suggest she was okay with abortions up to birth. No wonder she won’t debate. How do you defend the indefensible?

From the ‘Gee, I Wonder Why File’

Just the News reports Joe Biden is aiming to ax a Trump-era investigation into foreign investment in American universities.

In a totally unrelated factoid, the University of Pennsylvania was accused a couple years back of receiving $22 million dollars from anonymous Chinese donors for the “Penn Biden Center for Diplomacy and Global Engagement.” This includes one anonymous donation of $14.5 million in May of 2018, shortly after the center opened.

You can read about the complaint from the National Legal and Policy Center to the Department of Education here.

Prospect reported Biden himself got nearly a million bucks from the center in 2018 and 2019. Not from teaching any classes, mind you. Just for a few events and speeches. A former intern at the Penn Biden Center, located in D.C., told Prospect that Biden was “never there.”

You’ll recall Biden had another office in D.C. after he left the vice presidency. That one was set up by Hunter Biden and his Communist Chinese business partners, with help from the Chinese spy he was bedding.

While Biden embellishes his resume, Kamala Harris is determined to erase her own.

'Nobody should have to go to jail for smoking weed,' says Vice President Kamala Harris, who sent nearly 2,000 people to jail for weed
https://t.co/DYWksaEeu6

Yeah, the woman who made her political bones tossing thousands of black men in jail for weed actually said, with no ounce of irony, “Nobody should go to jail for smoking weed.”

The “border czar” was down in the border state of Texas over the weekend … and didn’t go near the border. Again. But she did have time to meet with mega-donors for a fundraiser. In her speech Saturday, Harris did not even mention immigration.

Harris also had time to appear on Seth Meyer’s late show Monday night. Because when the nation is the closest it has been to nuclear war since the Cuban Missile Crisis, the best place for the second most powerful person on the planet to be is … on a late night entertainment show.

Ever considerate, Harris brought another of her famous word salads to Seth.

KAMALA HARRIS: "When you see our kids, and I truly believe that they are our children, they are the children of our country, of our communities, I mean, our future is really bright if we prioritize them, and therefore prioritize the climate crisis." pic.twitter.com/4NTK0wdIwF

“For what shall it prosper a celebrity if she shall gain the whole world, but lose her soul?” (Mark 8:26, New Brew Translation)

It’s sad, really. Love her or hate her, Madonna had game. She had a nose for what was coming next and crafted pop hits with the best of them. Now she hobbles after relevance like an old dog lumbering after a postal worker. The other day, a nearly unrecognizable Madonna posted on TikTok a bizarre video where she seemed to suggest she is gay.

I pray she finds the wisdom that is supposed to come from growing old. Perhaps she should read Dr. Michael Brown’s “If You Are Over 60, You Could Be Part of the Joshua Generation.”

Our Nancy Flory just paid a visit to the set of The Chosen. The first fruit of that visit we get to enjoy is Nancy’s interview with Brandon Potter, who plays Quintus. Potter tells Nancy that season three will be darker.