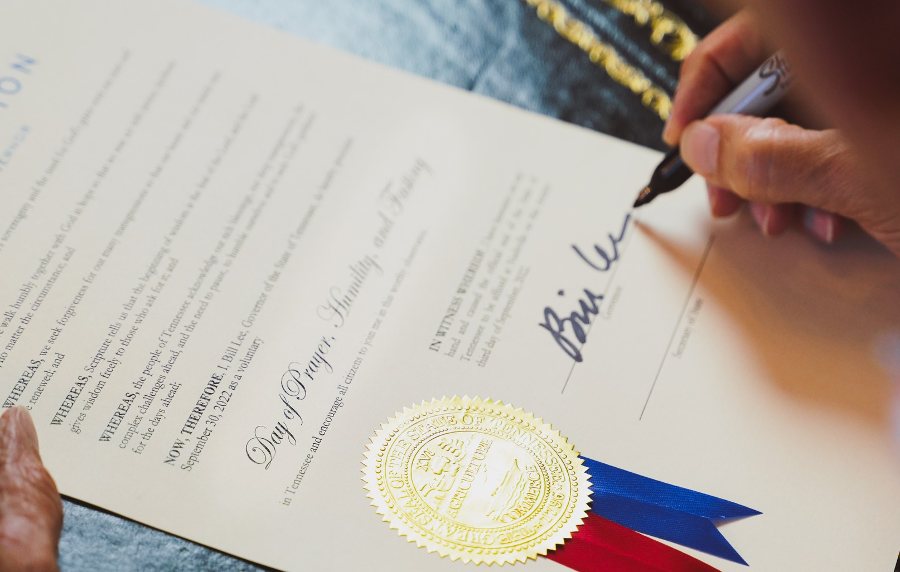 Tennessee Governor Bill Lee declared Friday, Sept. 30 “a voluntary Day of Prayer, Humility and Fasting” in his state. He has declared such a day around this time of year every year since he took office in 2019.

In a Facebook post last week, Lee said he and his wife, Maria, “invite Tennesseans to join us in this tradition to thank God for his many blessings, seek His wisdom in all circumstances, and ask for His continued grace & favor in the days ahead.”

The proclamation emphasizes God’s sovereignty, dependence on and humility before God, seeking forgiveness for “our deep transgressions” and seeking wisdom from God. The second line echoes Micah 6:8 (“And what does the Lord require of you? To act justly and to love mercy and to walk humbly with your God”). The fourth line references Proverbs 9:10 (“The fear of the Lord is the beginning of wisdom”) and James 1:5 (“if any of you lacks wisdom, let him ask God, who gives to all generously”).

WHEREAS, we acknowledge God’s sovereignty and the need for God’s grace over our state and our nation; and

WHEREAS, we walk humbly together with God in hope so that we may act with justice, kindness and love, no matter the circumstance; and

WHEREAS, we seek forgiveness for our many transgressions so that our hearts and our minds may be renewed; and

WHEREAS, Scripture tells us that the beginning of wisdom is the fear of the Lord, and the Lord gives wisdom freely to those who ask for it; and

WHEREAS, the people of Tennessee acknowledge our rich blessings, our deep transgressions, the complex challenges ahead, and the need to pause, to humble ourselves and to seek God’s guidance for the days ahead;

NOW, THEREFORE, I, Bill Lee, Governor of the State of Tennessee, do hereby proclaim September 30, 2022 as a voluntary Day of Prayer, Humility and Fasting in Tennessee and encourage all citizens to join me in this worthy observance.

Lee discussed his dependence on God in a 2021 interview with CBN in which he described how Jesus rescued him following the death of his first wife and then the attempted suicide of his daughter. “There is no other rescuer than the rescuing arm of Jesus Christ. And when you are in the deepest, darkest place in your life, the moment where you think there isn’t going to be a rescue — and He rescues. Forever, you know that you have a rescuing arm.”

Lee also told CBN, “I found myself, when I became governor, being very much aware of the fact that — I’m not capable of doing this on my own, realizing that more than ever — I needed wisdom and discernment and guidance and insight. It’s living and active. His Word brings life to every situation.” Lee emphasized the importance of humility in the face of power: “All of us have pride and I’m certainly just as broken as any man. Humility is maybe the most powerful characteristic a leader can have because the combination of pride and power is lethal.”

Lee has taken criticism for his proclamations in the past. In his first year in office, an opinion editor for USA Today David Plazas wrote an op-ed for The Tennessean titled, “Gov. Bill Lee’s call to pray does not violate the law, but it creates a slippery slope.” Plazas said, “His call to prayer could be seen as favoring one faith over another.” He also acknowledged the call to prayer is voluntary and, “a proclamation does not carry the weight of law.”

Lee referenced historical precedent for such proclamations, telling reporters in 2019, the “opportunity for people to come together and to unite around asking for blessing for our state and for the people of this state is valuable. It’s historically something that presidents and governors have done throughout history.”

The timing of this proclamation in late September and of past proclamations in early October fall roughly around the Jewish holy day Yom Kippur, the Day of Atonement. This day, described in Leviticus 16, is a day of fasting, rest and being cleansed from sins.

Whatever Happened to Trump Being Restored to the White House This Year?