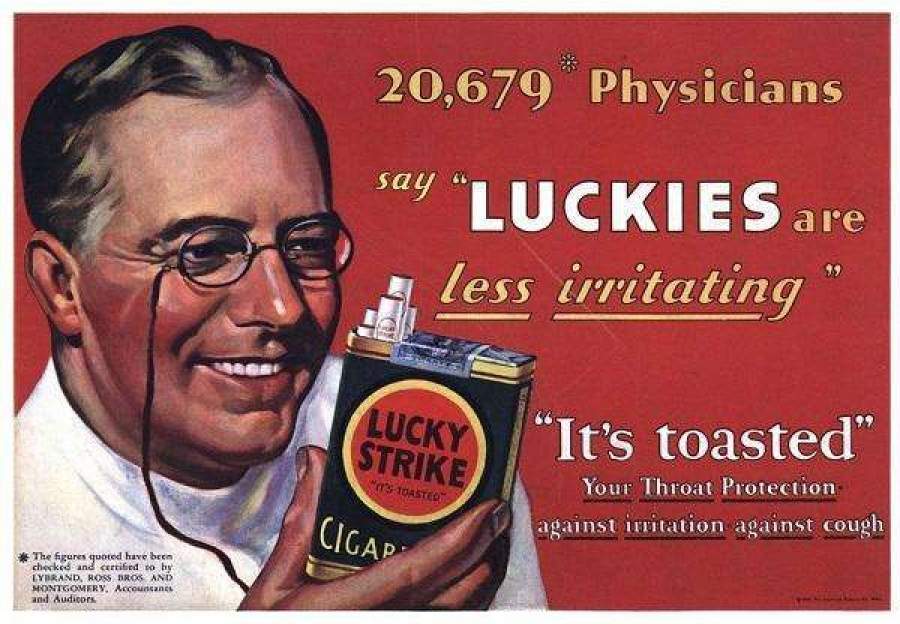 Most of us are too young to remember it, but for decades no one really admitted that smoking could kill you. (My mother got hooked long before that, and smoking 2.5 packs a day did indeed kill her.) Nowadays we chuckle at pictures of cigarette ads featuring doctors’ testimonials, or surgeons in white coats endorsing Lucky Strikes.

But it took many decades to establish the cancer-causing effects of cigarette smoking. And a fierce battle against false, politicized “science” on the part of the tobacco industry. Nowadays, a doctor who tried to pose in a cigarette ad today would lose his license. The industry wouldn’t even try it.

From Cutting Up Corpses to Delivering Babies

Before that, in the 19th century, an even greater medical scandal afflicted the public. There was even less excuse for this one. Male doctors (they were almost all male) would dissect human bodies in the morning, then without washing their hands go on to deliver babies. That’s right, their corpse-stinking fingers reached into birth canals, all day long.

The results were appalling: women who gave birth in “safe,” “scientific” hospitals were 750 percent more likely to die after childbirth than those who gave birth at home. Some physicians observed this horror and urged their colleagues to wash their hands. For their courage, they got “cancelled,” fired, and ostracized.

One of the greatest, Dr. Ignaz Semmelweiss, was locked in a madhouse where he died after beatings by his keepers. Members of the medical establishment attributed all those new mothers’ deaths on a thousand other causes, from their poor backgrounds or their “inferior germ plasm” to their “vicious” habits. Anything, anything, but take the blame themselves.

What if I told you that a black politician who supports the Democrats on social issues was just as depraved as a doctor peddling cigarettes to kids? Or delivering babies with death-tainted fingers? The same for a politician of any color who represents working-class people, as opposed to our richest elites.

Because what’s killing, imprisoning, and tormenting black Americans (and working class white ones too) isn’t “systemic racism,” or capitalism, or any of the other superstitions the left likes to peddle. It’s the Sexual Revolution and its aftermath. Sexual libertinism is the Marquis de Sade’s wistful fantasy that we can cut out the God-given bond that holds families together and generates the whole human race, and turn it into a toy. A harmless game like “Twister.” (De Sade was the first pro-choicer in modern history.)

The Sexual Revolution: Elites’ Poison for the Poor

In the 1960s, the New Left peddled the trinity of “sex, drugs and rock and roll” to lure the young to its cause. The children of the elites, and the upper middle class, could dabble in such practices. Then later land on their feet. They could always go to rehab on Daddy’s insurance. Get a quickie abortion, which men like Hugh Hefner somehow convinced women was in their best interests. Take a “gap year” hitchhiking Europe.

But poor kids, black and white, who embraced promiscuity, or drug use (as young people are tempted to do), didn’t have such options. They’d either end up in prison, or trapped in the welfare glue trap which the Democrats helpfully offered, a recycling bin for the masses whom their revolution destroyed. Fatherless poor white boys do no better in America than black. The same for single moms on welfare. The color isn’t the issue.

A Glue Trap for the Masses

My mother was lucky. She was born dirt poor — real Hell’s Kitchen tenement malnourished “shanty Irish” kind of poor. She was one of 11 kids of an alcoholic cab driver with chronic tuberculosis and a housewife with an 8th grade education. Only four of Mom’s siblings survived past age 3. But I say she was lucky, and we were lucky — or rather, blessed — nevertheless. Because she was born in the Great Depression, not in the 1960s.

Because what’s killing, imprisoning, and tormenting black Americans (and working class white ones too) isn’t “systemic racism,” or capitalism, or any of the other superstitions the left likes to peddle. It’s the Sexual Revolution and its aftermath.

Mom didn’t have teachers, the media, and everyone else who mattered telling her “Just do it!” Mom didn’t face abortion clinics promising to “clean up” her mistakes. Or a raft of welfare programs promising her an apartment of her own and a steady income as the reward for getting pregnant. So I grew up with a father, instead of a monthly check from Uncle Sam. I had someone to discipline me, teach me the limits of violence, and dish it out when I needed it. I wasn’t raised by “the community” (i.e. street gangs) as Black Lives Matter, Inc. advocates.

One Strike and You’re Out

Poor people can’t afford “sex, drugs and rock and roll” like slumming Ivy Leaguers whose parents manage hedge funds. For them life is really “One strike and you’re out.” And for countless millions in cities across our country, the strikeouts are piling up. The jails are full of fatherless sons, the victims not of “systemic racism” but hedonistic elites who don’t think that their lives matter. Not a bit.

Elites Can Afford to Live as if God Doesn’t Exist

It’s not systemic racism but contagious hedonism that’s poisoning the poor. Our elites can afford to live as if God does not exist. (At least, till they meet their Maker.)

They’re swathed in thick cushions of money, support and endless second chances. They can go right on living the superstitions of Margaret Sanger and Gloria Steinem, of Hugh Hefner and Al Goldstein. No skin off their privileged noses. The poor pay with their lives. No wonder they’re angry.

And the lie of “systemic racism” is a great way for coddled elites to re-channel that anger. To deny their guilt, redirect it to greening bronze statues of dead Victorians. Instead of where it belongs, in their own godless, utility-calculating hearts.

That’s why I can’t take seriously the hero’s funeral our elites just threw Rep. John Lewis. Yes, he bravely resisted the vicious evil of segregation, some 60-plus years ago. He echoed the Christian rhetoric of Rev. Martin Luther King. I’m grateful that the crusade Rev. King launched proved successful. Our Christian vision of the person leaves no room for racial bias.

Selling Out the Poor for Paychecks from Elites

But the left quickly sawed off the biblical branch equality sat on. When their political paymasters demanded it, men like Rev. Jesse Jackson went from calling abortion “black genocide” to backing Planned Parenthood. They knew it for a white-run eugenics group that once collaborated with Nazis who’d run concentration camps in Africa. They just didn’t care.

Men like Rep. Lewis abandoned the newly vulnerable group, unborn Americans of any color (but hugely, disproportionately black and brown, in fact). Lewis even supported partial birth abortion, and opposed the bill protecting unborn babies capable of pain. He voted for unborn babies to be treated much worse than segregationists ever treated him. It turned out, for Lewis and his like, that advancing his own group’s best interests was much more important than the Gospel.

The bitter irony is: such men weren’t even supporting their group’s interests. Not one bit. They were soothing the consciences of rich, mostly white, spoiled hedonists in comfy gated suburbs. And gulling their own communities about what is really killing them. Nice work if you can get it.

Rest in Peace, John Lewis. May God have mercy on us all.