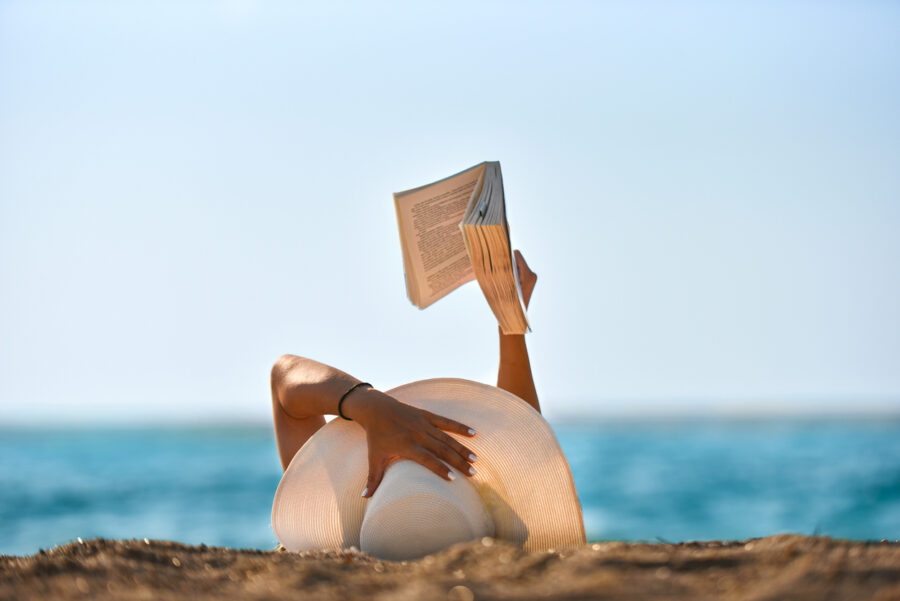 We may be racing toward Labor Day, but to paraphrase Martha and the Vandella, “Summer’s still here and the time is still right for reading on the beach … or up in hills … or down at Uncle Harry’s … or in the backyard.” Besides, these days traveling to the far corners of the globe and galaxy with a good book is certainly cheaper than driving or flying.

So what’s been on the summer reading list for Stream staffers? If you remember past years, the answers can be, how shall we put it, eclectic. (Don’t believe me? Check out John Zmirak’s “My End of Summer Reading List: From Eric Metaxas to ISIS.”)  This year is no exception.

We are in a middle of a move, so the opportunity to sit and read has been proven elusive. Been donating books more than devouring them. Still I’ve managed to dive into a witty cozy mystery series set at British country estate called “Honeychurch Hall.”  Kat is the popular host of an antiques show who tracks her eccentric, secret-filled mother to the old stable house of the stately Honeychurch Hall. Murder, mayhem and mirth ensue. Imagine Downtown Abbey meets Masterpiece Mystery with a little Fawlty Towers thrown in.

However, the big effort this summer is reading books on local life, local history or from local authors here along the Chesapeake in Southern Maryland, getting immersed in our new stomping grounds. Starting with a book called Spirit of the Law by Louise Gorday that I found in a country store on the other side of the Patuxent River.  A whimsical yarn about plucky “soul runner,” who escorts the departed to their eternal destination and befriends a Maryland pub owner.

The discovery fits with what I wrote with my summer list in 2018,

“Any list of summer reading should include the unexpected, the book you just happen to come across. That book that, for whatever reason, keeps calling out to you at the bookstore.”

Funny though. After only a week here, I suspect our new hometown will inspire as many characters as I’ll find in any book. Already, we’ve got the former intelligence operative picking up Chinese take-out, the nine-year-old boy operating the register like a seasoned pro, the owner of a local greasy spoon with décor unchanged since the Kennedy administration bellowing from the kitchen about “@**#(@ socialism,” the slightly drunk Peruvian-German woman on the beach sharing her contempt for the DC politician who got away with killing her husband in a car crash … and her love of Jesus.

Yeah. Some days the best reading is done by your ears.

Summer reading ought to be beach reading. No such luck here, especially with COVID through the first half of July. Even in mild form it’s a version of what I call HBWAV — “Hoo boy! What a Virus” — and reading was out of the question. Then, three conferences with four talks to deliver in nine days. It’s HBWAW: “Hoo boy, what a week!” But I had a long drive to Kalamazoo and back last week for one of them (yes, Virginian, there is a Kalamazoo), and took the opportunity to listen to Carl Trueman’s Strange New World: How Thinkers and Activists Redefined Identity and Sparked the Sexual Revolution.

Maybe you’ve heard of his earlier book,The Rise and Triumph of the Modern Self: Cultural Amnesia, Expressive Individualism, and the Road to Sexual Revolution. Maybe you’ve tried to read it and found it to be out of reach. Maybe you actually have read it, and wished you could digest it better. That was me. Strange New World is a kind of Cliff’s Note version — if you consider 200-plus pages “Cliff’s Notes.”

This is must-read material. I don’t say that lightly. No, actually, I hate that cliche. It’s overused. (I’m okay with needless redundancy, of which I have just committed one. Well, two now, actually: “needless redundancy.” Oops, three. I have now committed three. Stop me!) It doesn’t matter how good a book is, I refuse to call it a “must-read.” But I can’t help it this time. This you must read. Pick either one, as they cover mostly the same ground, but know that Rise and Triumph is both more thorough and tougher sledding.

What then is it in these books that would lead me to break my rule? Simply this: understanding the world we live in. I do this for a living, and I thought I had a good grip on it, but Trueman unveils so much more, explaining both the roots and the real meaning of the sexual revolution, showing that it’s really a coup effected by the rise of “the autonomous self,” “psychological self,” or “expressive individualism.” They’re all saying one thing: The self is in charge, and the self must feel good about itself.

This is how it is in the Western world in the 21st century. But it is a strange way to be, a “strange new world.” It feels so familiar here, for us who live in it, but it’s a world that no one throughout the rest of world history could fathom. It’s also spiritually, relationally, and cognitively disordered, messed-up, sick. For us who hope to do something to improve it, there’s much value in knowing what brought it to be. It wasn’t just the 1960s. It has roots in the 1860s, even the 1760s and then-abouts.

I’ve read both books now. I still have much to digest. I read the longer one in print first, but I have it on audio, too. Maybe it’s time to take another long drive. It is summer, after all.

Summer here in Texas starts around April 15 and lasts through Halloween — except in the years when it lasts until Thanksgiving. Hey, there has to be some downside to living in a state that’s merely run by RINOs, instead of … demons. Otherwise everyone would move here immediately, and vote in Beto O’Rourke.

Since summer for me is barely half over, I don’t feel bad about my summer reading recommendations being somewhat belated for the rest of you. Go ahead and read in what you experience as autumn, too. No “weather god” will smite you for it, not even the Climate Gaia who’s demanding that Europeans stop growing food. So here are some titles I’ve enjoyed, and recommend:

The Stakes, by Michael Anton. If you find our current political situation baffling and appalling, here’s the book that explains what’s going on. Most of the West is ruled by an interlocking Oligarchy of self-appointed “elites,” whose only real ideology is holding onto power, at any cost. The false religion of Wokeness, the mindless support of the left for Big Pharma, the Deep State, and militarized police … it doesn’t make sense except when you see it through this lens. And once you do, you can never unsee it again.

Deeper Heaven, by Christiana Hale. This is a brilliant theological reading of C.S. Lewis’ prophetic “Space Trilogy” novels, Out of the Silent Planet, Perelandra, and That Hideous Strength. If you enjoyed those novels as I did, chances are that there was a lot in them that you read past, not quite understanding. Hale unpacks the rich, complex tapestry of celestial symbolism that Lewis encoded in the books, the better to show forth God’s glory and our need for Grace. I highly recommend getting hold of Deeper Heaven, then reading those three Lewis masterworks all over again.

Is Atheism Dead?, by Eric Metaxas. Okay, he’s a friend. But if the book weren’t extraordinary, I’d pass over it quietly. Instead, I can honestly say that this one volume contains three excellent short books—the first a dismantling of Darwinist materialism, the second a survey of the fascinating (and faith-building) findings of biblical archaeology, and the third a sophisticated savaging of New Atheist arguments. An uplifting and enriching read for the mind, heart, and soul.

Dominion, by C.J. Sansom. This book is in one of my favorite genres, alternative history. It imagines a Great Britain that came very close to being real: One where Winston Churchill did not become Prime Minister in 1940, and the country made peace with Hitler right after Dunkirk. With rich, complex characters, an exciting plot, and a rich knowledge of real-world history, this book conveys the profound evil that the West faced in World War II—and the courage it took to defeat it.