Standing at the Edge of the Cliff: Is It Too Late to Get Ready for What’s Coming? 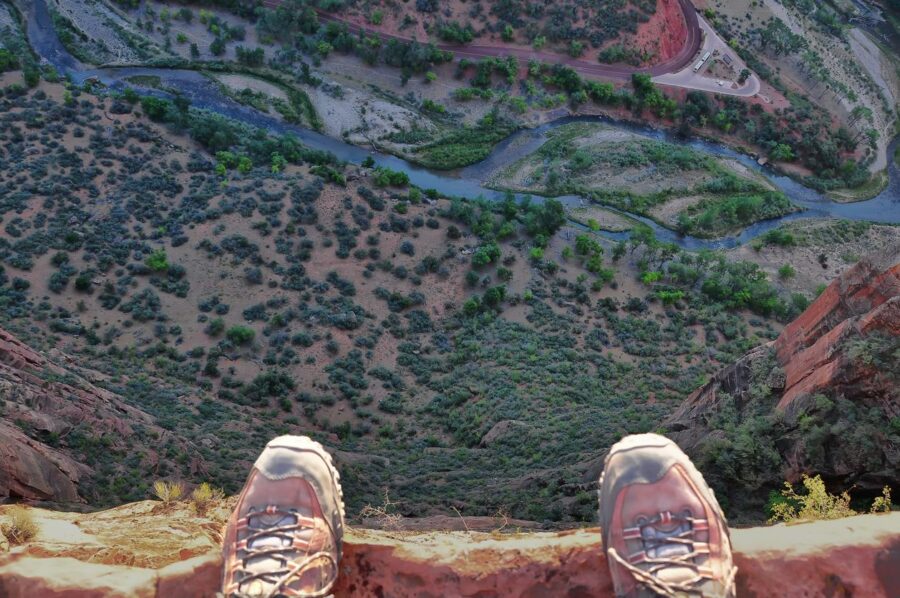 Some time ago I wrote the first of two parts on the unprecedented crisis looming for Western Christians. I got COVID in the meantime. It put a lot of things on hold, including this second column on that crisis. It was far — very far — from the worst case of COVID, but it was still bad enough. I’m glad to be back again.

In the first column I said three factors make our situation unlike any that have come before:

Surprised When We Ought Not Be

Our circumstances are unprecedented, and we are not well prepared for them. Consider 1 Peter 4:12, which tells us not to be “surprised at the fiery trial that has come upon you, as though something strange were happening to you.” No Christians in all church history have been set up better than us to fail in following that instruction. No one else has been so well prepared to be unprepared for the fiery trials that are coming. We’ve been trained to think there’s no need to get trained for what’s ahead.

I’m talking about myself when I say that. I grew up in a world where Americans respected Christianity, and Europeans did, too, though to an already shrinking degree at that time. Some Americans saw the government as their hope, others recognized it as a necessary evil, but at least we had the media watching out for us. Walter Cronkite, CBS’s news anchorman, was the very picture of trustworthiness. The “Grey Lady,” The New York Times, was the emblem of respectable journalism.

Racism was real, yes, and we felt the pain of Vietnam, campus unrest (especially Kent State) and Watergate. Still, though, we trusted science, we trusted our neighbors, and above all we trusted that the future would be bright, including the future of the faith.

‘Persecution? Here? Come on, Be Serious!’

As for persecution, our answer would have been “What, here? Come on, be serious. That’s for other people in other times. Not for Americans, not for Canadians, not for anyone in the Christian West.”

Could it come? Theoretically we knew the answer was yes; but nothing could be more stunningly unexpected. Which is exactly the way Peter told us not to think about it.

Now it’s not so unthinkable. It’s coming, and for many people in many places it has arrived, right here in America. They’ve been censured on the job for their Christian ethics, blocked from graduate school opportunities, shamed on social media. In Jesus’ own words, they’ve experienced others reviling them and uttering all kinds of evil against them falsely on His account — which in that same verse (Matthew 5:11) he labels “persecution.”

That’s a hard expectation for us who have been accustomed to easier times. We’re primed for denial, not for recognizing reality.

Persecution comes by degrees. We’re not suffering like some Christians in parts of North Africa, India, or China, but if Jesus calls it persecution, it’s persecution. And there’s a sense in which the pain might be comparable anyway. Take any two groups that are suffering serious loss, or pain, or poverty, and if one has fallen from a much higher level of comfort than the other, that group will feel the pain more keenly for it. It’s the pain of loss, added to the pain of current circumstances.

And that, my believing friend, is us, in the foreseeable near future. Other Christians have suffered persecution bravely, in many horrific ways. Thank God for their example. Few, however, have taken the cliff-high tumble we’re on the verge of experiencing.

Now Is the Time to Prepare

We are heading toward very hard times. God can change anything, but at this point, every appearance tells us to expect tough times ahead. That’s a hard expectation for us who have been accustomed to easier times. We’re primed for denial, not for recognizing reality. That makes the church in America an absolute sitting duck for being “surprised at the fiery trial that is coming upon us.”

It need not be so. We can gird up for it, and we’d better. Too much is at stake; we dare not let the fire take us by surprise that way. The world may hate us, but Jesus’ word rules. He says we are the salt of the earth, the light set here to shine His glory; therefore that is still what we are and who we are. We’re still the ones meant to bring good out of evil, light in darkness, joy in the midst of despair, hope when nothing seems hopeful anywhere.

But our place in the world is changing, so therefore our modes of ministry must change, and so must your sense of mission as a Christian.

Prepare Now for New Tasks Ahead

I do not mean to say everything must change. The basics remain: Now as always, everything begins and ends with our own unshakeable faith in Christ. If you find faith tenuous in your life, then your personal task must start with seeking a better grip on who Christ is and the reasons you can be sure He is real. Lacking that, you set yourself for an even greater fall, into despairing unbelief. Study up on your apologetics now.

The new task we must prepare for now is learning how to hold tightly to hope, joy, and peace in Christ when such things are hard to find in our circumstances. This will call for community that’s tightly integrated, mutually supported, and of course well-led with fully biblical teaching and preaching. This is paramount. Whatever community-building you’ve done in your church is good, but not likely good enough for what we will all need in days to come.

Our task will still include outreach, too. Now more than ever we have opportunity to tell others how they can find the same anchor we hold onto. Some of them, at least, will be more eager than before to know there is still a Rock that will hold them firm.

United for Strength and for Joy

Above all we must determine now, in advance of whatever may come, that we will follow Jesus no matter what. No matter what! How much does that cover? Everything. Every possible eventuality. I need not do any more of the imagining for you. I only urge you to prepare to hold on tight, and prepare to follow Him no matter what may come.

You will need a fellowship of like-minded people to support you in that; and you will support them in return. You will need a living relationship with Him. You will need to know that you have a sure and certain eternal future with Him in control.

These are grim words, I know. The book of Revelation was grim, too. Never forget that it was written to encourage. It may (and should!) bring dread to the enemies of God, but for us, its encouragement is both glorious and eternal.

Heed the warning — please! It’s been coming for some time, but until recently it’s been, “Be wise: There are cliffs ahead!” Now instead (if I am reading the times rightly), it’s “Look out! Don’t fall off!” In other words, I believe we’re very likely right at cliff’s edge. I have great hope in Christ, but I have great concern for His people in this part of the world, at this time in history.

The longer we take to realize the fiery trial can come for us, too, the more it will surprise us, as if something strange were happening to us. Will we open our eyes to what’s happening? Will we awaken to the reality that God is good enough to see us through? The time has come. Seek the Lord. Pursue Him. Hold on tightly. Do it in community. And for His sake, for your own sake, and for the sake of the Church in the world, start getting practiced up for it. Now.

The Minuteman Strategy: How Your Church Can Still Change the World (Part 1)