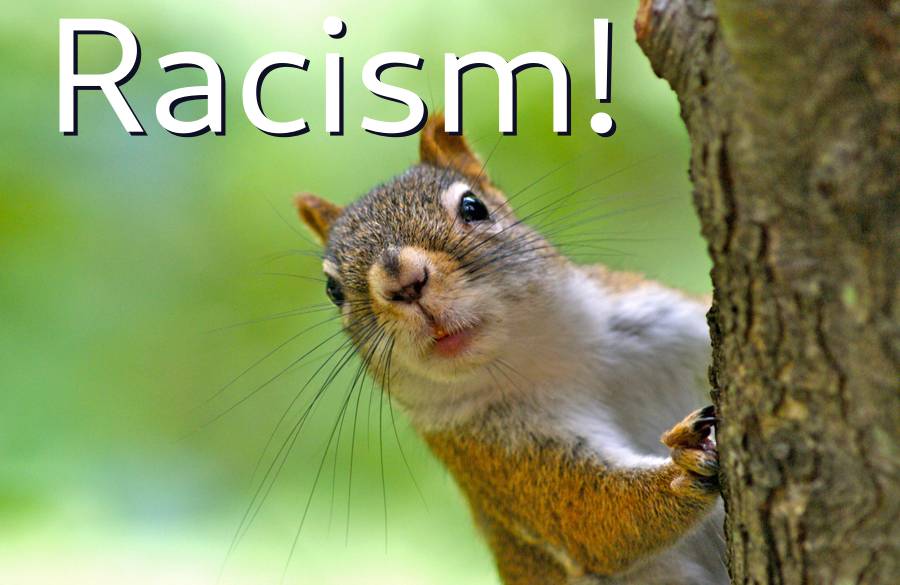 Remember the old joke? It has a new punchline now. The Sunday School teacher asks, “What’s brown and has a bushy tail and runs up and down trees?” The boy answers, “Sounds a lot like a squirrel to me, but I’m gonna say it’s Jesus.” Because the answer is always Jesus.

Well, there’s a new version today, in or out of Sunday School: “Sounds a lot like a squirrel to me, but I’m gonna say it’s racism.”

It’s all so simple. There’s only one thing wrong with the world. Something goes bad, and you know the reason, no need to look at any closer. Racism. The answer is always racism.

Late last month the Lenses Group abruptly disbanded itself. Lenses was racial reconciliation training team within the mission agency Cru, the ministry formerly known as Campus Crusade for Christ. Two months ago I wrote a Stream article asking specific questions about Lenses and other CRT-related concerns at Cru. I’m still awaiting answers. Lenses was involved, because it has been credibly charged with teaching critical race theory.

Lenses made its decision on its own. Even its immediate superiors in Cru learned of its disbandment when the group sent an email to all Cru staff. They followed that email with a tweet telling the world they’d shut themselves down.

So what’s behind all that? It’s easy: Racism!

Racism! It Must Be Racism!

Jemar Tisby, author of the best-selling The Color of Compromise, called Lenses’ closing “another casualty of the culture wars.” He said it was the “apparent” result of “fear-mongering over Critical Race Theory and resistance to racial justice, in general.”

Tisby went on to say:

Part of the context is a statement issued by some in Cru called “Seeking Clarity and Unity”… they say efforts of the Lenses Institute and its personnel to foster diversity “have created distrust, discouragement, and a host of other problems.” This is an age-old objection — the people who point out racism are the source of division. The deliberate and concerted effort on the part of some Christians to curtail efforts at biblical unity through racial awareness, justice, and equity is ungodly, spiritually immature, and frankly infuriating.

Reactions on Twitter echoed Tisby’s. Shelley Bauder asked, “Is it possible that many evangelical Christians are doing all in their power to not understand anti racism nor promote racial reconciliation/healing?” Daniel I. Morrison wrote, “Sadly, it often seems that #Christians who work against racism and for biblical unity are often accused of disunity. Laodicea was a united #church. Jesus threatened to spit them out.” These are just a sample of the tweets.

Tisby says what happened to Lenses is “infuriating.” I feel the same way about his rush to “racism” judgment: It’s infuriating.

I was a staff member with Cru for 34 years, about a third of that time in senior leadership. When I left in 2013, we’d already been struggling with race-related issues for at least 20 years. Cru was overwhelmingly white. Our black staff spoke of feeling invisible, patronized, left out.

The problem isn’t just that charges of racism may be wrong; too often they’re mindless, too.

We worked on it. We did training, which for me was life-changing. Among other things I discovered how much I need to listen. I need to take it seriously when blacks say their experience in America is different from whites’. Maybe I can’t solve it for them, in fact they may not even want me to solve life for them. But Cru was certainly taking steps to increase blacks’ influence in the organization. Most of the time my best part was to listen to my black colleagues, take them at their word, seek to empathize, and treat them with all the respect due a fellow worker and a fellow human being.

The Lenses Group arose after I left in 2013. I’ve been told that it started as a vehicle specifically to give whites to practice empathy and listening in that manner, and to develop competency for ministry among blacks. What happened next? I don’t know much of the story, but I do know enough to be sure there was more going against them than the over-simplified, one-dimensional answer of racism.

How Not to Rush to Judgment

Tisby was right this far: There really is such a thing as fear-mongering over CRT. I’ve seen something like it myself, when I’ve written as I have here about blacks’ experience being different than whites’, and that we need to address this together. Someone always says I’m falling for liberal lies about racism. No, actually, I’m speaking truth. If it’s not obvious, you need to get out more, and you need to quit assuming you know in advance. That’s the definition of prejudice, by the way, and it’s wrong.

That’s not the same as critical race theory, though. CRT starts there, but it also throws in a broad mix of Marx, Freud, and postmodernism, and then takes it in all kinds of ungodly nonsensical directions: All whites are racist, no one else is racist. “Whiteness” is the problem. We can’t solve it, but we can be properly shamed and “check our privilege.” Whites can’t see it because of our “fragility.” Systems are racist, institutions are racist, and the best answer is to tear them down.

Truth is “perspectival” in CRT so if standard math, logic, and science don’t fit some cultures, then they can make up their own non-standard versions. Minorities’ “truth” is more true than white males’ truth. Justice is about equity, that is, equal wealth and political power, and equity is the one great goal of life. Maybe other virtues would be fine to pursue, but let’s focus on the one that counts, please, and you can forget about the rest. As for God, maybe there is one, maybe there isn’t, but what good is He? It’s up to us to solve everything.

I stand firmly against that. It’s not racism that motivates me, it’s knowing that it’s factually and ethically wrong. I certainly don’t want to live in a society ruled by CRT, but that’s not “fear-mongering,” it’s being sensible about a real danger.

So Tisby has reason to warn against a rush to judgment, calling things CRT when they aren’t. Unfortunately he and many others rushed just as wrongly to their own judgment, blaming the Lenses Group’s demise on racism.

Why Did the Lenses Group Disband?

So what really did cause Lenses’ end? I don’t know the whole answer, but I know it wasn’t entirely racism. I had the chance recently to view five hours of a Lenses Zoom training session. Most of it was good racial reconciliation work. Some of it was heavily concerning, though, especially the long three-minute scolding delivered to a participant for recommending a solid list of books, videos, and articles explaining some of the problems with CRT. The list was “almost diametrically in opposition” to what Lenses was trying to accomplish there, he said. That’s strong language. No criticisms of CRT allowed! None!

That same leader said reproducing their training or materials in any way was “verboten.” That’s strong language, too. Possibly even culturally insensitive, even if he pronounced it ver-botten. Just like the NFL, he said, reproduction was “strictly forbidden.” So participants could tell you what they were taught at Lenses, but all they could show you was the stuff they brought home with them.

You can see the effect of all this secrecy right here: I saw this on a five-hour video that was taken down from YouTube the next day, so I can’t prove any of this to you. You”ll have to take my word for it. (Don’t worry. I took very detailed notes.)

To that, now, let’s add Lenses’ own explanation into the mix: “The climate within Cru, affected by forces inside and outside of the organization, has become cautious, unclear, and in some places even toxic. … These same forces … have fostered a climate of suspicion, mischaracterization, and in some cases direct intimidation.”

If there was real intimidation, it was wrong. It might even have been racist, for all I know.

I’m not as impressed, though, by their complaints about caution, lack of clarity, suspicion, and mischaracterization. Take any organization, form a group in it that’s teaching any highly controversial material, or even might be teaching it, have them keep most of it secret, and watch what happens. I can guarantee the outcome: People will treat them with caution, lack of clarity, suspicion, and mischaracterization.

It’ll happen every time. Racism need not have anything to do with it.

The Rush to Blame It On Racism

Do you see the damage that does? It isn’t just that some of us get falsely, infuriatingly blamed for racism. It’s also that questions get stopped short. Did Lenses do anything to cause its own demise? No one needs to ask, right? But if no one’s asking, no one’s learning.

The problem isn’t just that charges of racism may be wrong; too often they’re mindless, too. To think there’s only one big problem in the world is the same as not thinking at all. I know Tisby isn’t mindless to that degree. This time, though, I think he fell for it. A lot of people are falling for it.

Conservatives can make the same mistake in the opposite direction. Please don’t do that. Reality is too complex for mindless, one-dimensional answers. It’s even more interesting than that.

Tom Gilson (@TomGilsonAuthor) is a senior editor with The Stream and the author or editor of six books, including the recently released Too Good To Be False: How Jesus’ Incomparable Character Reveals His Reality.donat