Sorry, But the American Flag is Not Directly Related to the Banner of Christ 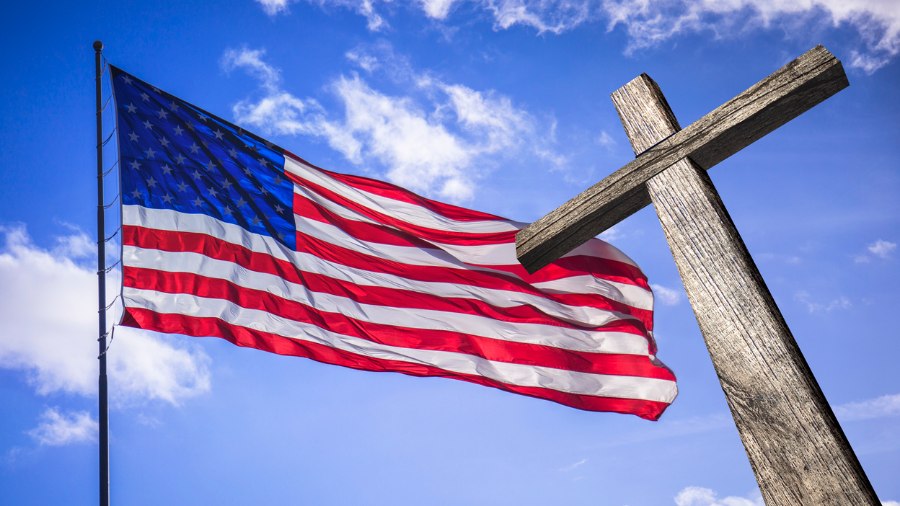 It is one thing to be a patriot, even a Christian patriot. It is another thing to conflate the American flag with the banner of Christ. Yet that is what General Michael Flynn did in a recent editorial.

Writing for the UncoverDC website, Flynn opined, “The battle we are engaged in cannot be fought with only human weapons: it requires the intervention of God because in a war against the forces of Evil, only the Lord can obtain the victory. And as American citizens, we must refuse to go to the funeral of our own independence.”

Flynn is Right in Several Ways

Speaking in broad terms (rather than in the specific context of the 2020 elections), I second Flynn’s sentiments. The ultimate battle for the soul of our nation is a spiritual and moral battle, not simply a political battle. And we can only see lasting, positive change with the help of the Lord. Amen to that.

And certainly, this is no time for passivity or cowardice. Once again, I concur.

Flynn continued, “We the people are proud to proclaim that the United States of America is ‘One Nation under God’ — in this public profession of faith in God, we recognize his Lordship over our country, and we proudly stand beneath the banner of Christ and our flag in which millions have sacrificed their very lives for. In scripture through the strength and commitment of Matthew, he said, ‘Whoever is not with Me is against Me’.”

But was Jesus, as quoted in Matthew, actually saying that the left was against Him and the right was for Him? Isn’t that a massive oversimplification, to say the least? And does the fact that we recognize the Lordship of Jesus over all of life mean that we can require others to do the same?

The biggest concern, however, is Flynn’s statement that “we proudly stand beneath the banner of Christ and our flag in which millions have sacrificed their very lives for” (sic).

We are certainly deeply indebted to those who risked their lives (or lost their lives) fighting for our freedom. And every American should be grateful to our veterans (and their families) for their service. That is not in question, and that is a healthy part of our patriotism.

We should also deeply appreciate the incredible opportunities we have here in America, a country unlike any that came before it in many significant ways.

We can also recognize the important role that the Bible played in the founding of our country.

But all that is a far cry from viewing America as a truly Christian nation or conflating the cross with the flag.

Rather, that is the type of Christian nationalism that can be so dangerous, the kind that non-Christians (or, even simply non-fundamentalist Christians) find so concerning.

That is the type of rhetoric that can lead to calls for a theocracy, something that I want no part of until Jesus returns and sets up His kingdom.

Yes, Our Loyalty is to Truth

Flynn said, “Our protest, our denunciation of electoral fraud, is not only motivated by the fact that we are supporting Donald J. Trump as a candidate: it is above all a battle for justice and truth, which goes far beyond membership in a party or voting for a candidate.”

Again, I can agree with those sentiments. If the election was stolen, that would be a travesty of justice, and that should be of concern to atheists and theists, to Christians and Muslims, to agnostics and believers. We should all want justice and truth.

But as many others have emphasized, patriotism is not the same as loyalty to the kingdom of God, and we confuse the two concepts to our own harm.

Do We See the Left as Deeply Sinful and Ourselves as Mostly Free of Sin?

There is also a subtle self-righteousness that infuses this “us” against “them” mentality, as if the sins of the left are heinous and the sins of the right quite trivial. As if the left’s hatred is vile and ours is justified. As if God overlooks the mountain of sin in the church, from sexual scandals to greed, and from gossip to failure to love our neighbor, because the only sin that matters is abortion. As if electoral fraud completely outweighed deception from the pulpit and slander in the pew.

Almost 2,000 years ago, Peter wrote that “it is time for judgment to begin with God’s household; and if it begins with us, what will the outcome be for those who do not obey the gospel of God?” (1 Peter 4:17) That is a sobering thought. Divine judgment starts with us, the believers.

Austin Cline, himself a secular humanist, claimed that “German Christians supported the Nazis because they believed that Adolf Hitler was a gift to the German people from God. German Christianity was a divinely sanctioned religious movement which combined Christian doctrine and German character in a unique and desirable manner: True Christianity was German and True German-ness was Christian.”

While Cline paints with too broad a brush, and while America is far from Nazi Germany and Trump is far from Hitler, the parallels remain striking and concerning.

He added, “Christian churches were willing to tolerate widespread violence against Jews, military rearmament, invasions of foreign nations, banning labor unions, imprisonment of political dissenters, detention of people who had committed no crimes, sterilization of the handicapped, etc. This includes the Confessing Church. Why? Hitler was seen as someone restoring traditional values and morality to Germany.”

Again, Trump is not Hitler and we who voted for him are neither Nazis nor supporters of Nazism. But to the extent that we think that true American-ness equals true Christianity, we make a serious mistake. And to the extent we wrap the cross in the American flag, we degrade the gospel.