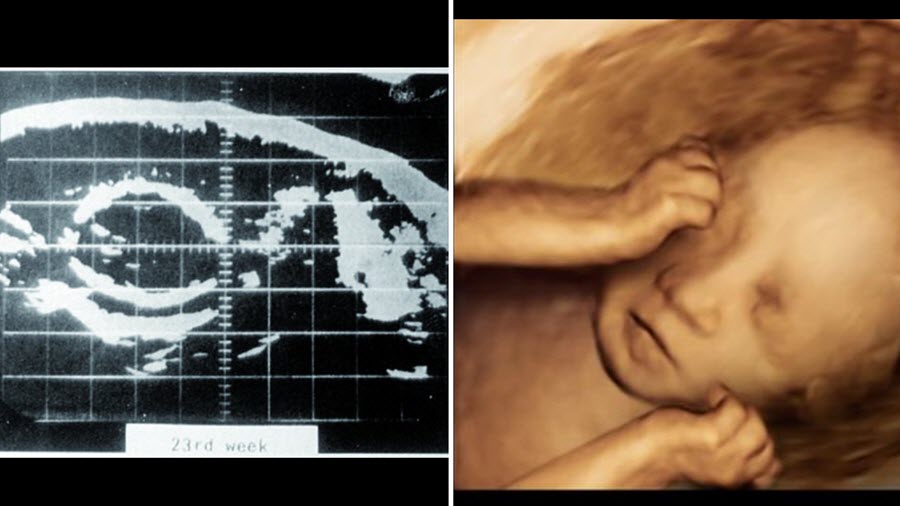 Comparing sonographic technologies in the time of Roe versus today.

Not partisan? Is there really any such thing anymore? The short answer is yes. But there are a few folks that could make “Mary Had a Little Lamb … his fleece was white as snow” partisan. “A lamb is white. You white supremacist!” Or maybe you’ve mis-gendered. “What if Mary now identifies as Gary?” And “Is ‘snow’ to trivialize climate change?”

But any reasonable person in America — no matter which side of the aisle — should agree on these following three points concerning the recent leaked SCOTUS draft decision. If you don’t, you should do some serious soul-searching.

The draft leak was a “dog whistle” to left-wing activists, and it worked. Home addresses of the conservative justices were published, and the radical protestors turned out in droves. They gathered at Roberts’ and Kavanaugh’s homes Saturday (in the rain) and moved to Alito’s home Monday. These fanatics even protested at houses of worship and torched a pro-life group’s office in Wisconsin.

Twitter “blue check” Simon Gwynn tweeted, “If you had the chance to kill Clarence Thomas and Samuel Alito, the two oldest right wing Supreme Court judges, should you do it while Biden can get his nominees to replace them confirmed?” Sick.

This administration from Biden, Harris, and Garland on down have refused to condemn this “mob rule,” and their silence is deafening.

Fox’s Peter Doocy asked Jen Psaki, “These activists posted a map with the home addresses of the Supreme Court justices. Is that the kind of thing this president wants to help your side make their point?” Psaki: “I think the president’s view is that there’s a lot of passion, a lot of fear, a lot of sadness from many, many people across this country about what they saw in that leaked document.” Jen, you could have saved yourself all that verbiage and just said, “Yep.”

Only after immense outcry (and probably some polling) did Biden give a half-hearted statement saying the justices shouldn’t have to worry about their “personal safety.” But notice he stopped short of condemning it or telling them to stop. On Tuesday, Psaki said of the protests, “We certainly continue to encourage that outside of judges’ homes” (which is a crime, by the way).

I don’t care if you’re a Republican, Democrat, Libertarian, Green Party, or Independent, under no circumstances should you condone this harassment of our Supreme Court justices. And I would be consistent if the draft decision went the other way, and conservatives were harassing Breyer, Kagan, and Sotomayor. There is a reason the SCOTUS is the only branch that has lifetime appointments. Its job is to decide cases by interpreting the laws of the land according to the Constitution without judges having to be re-elected by a constituency.

The Merits of Roe v. Wade

Roe v. Wade became law by seven individuals deciding for 200 million people (at the time), despite the fact that abortion is not mentioned in the Constitution or the Declaration of Independence. (Although the Declaration does acknowledge life as one of our God-given unalienable rights.) It was a grave mistake. Even many legal scholars who are pro-choice admit it was a terrible ruling.

The entire MSM went into a frenzy after the recent leak. As predictably as if someone pulled the strings on dozens of talking dolls at once, they all cried, “This is a threat to our democracy!” This couldn’t be further from the truth. The cancelling of Roe would actually establish a much greater level of democracy by sending the issue back to the states for the people to vote and decide. Some states will certainly vote to protect unborn children, but many will not.

The Left’s icon, Ruth Bader Ginsberg, though rabidly pro-choice, was not a fan of Roe as jurisprudence. She said, “[Roe] invited no dialogue with legislators. Instead, it seemed entirely to remove the ball from the legislators’ court.”

Even then-Senator Joe Biden voted to overturn Roe in 1982 and said, “I don’t like the Supreme Court decision on abortion. I think it went too far.”

Whether you’re pro-life or pro-choice, we should all agree that Roe and its offspring were not the way to settle this incredibly divisive issue in our democratic republic.

The Verdict of Science

The word “progressive” means: “Favoring or advocating progress, change, improvement, or reform, as opposed to wishing to maintain things as they are, especially in political matters.” But the party that claims to be “progressive” is stuck in the rut of bygone days when it comes to the science surrounding the development of a fetus.

Those of us who accept God’s Word as truth have known all along that a life begins at conception (see Psalm 139:16, Jeremiah 1:5, Galatians 1:15), but apart from that, today’s technology should leave no doubt.

All that reminiscing to underscore the fact that 1973 was a long time ago, and a lot has changed — particularly in the area of technology. In 1973, only about seven computers worldwide were connected to what we now call “the internet.” (Al Gore hadn’t figured it out yet.)

Viability Is a Moving and Meaningless Target

In 1992, the SCOTUS case Planned Parenthood v. Casey reaffirmed Roe after some provisions of the law were challenged by a Pennsylvania law. However, it slightly broadened the authority of states to place some restrictions on abortions based on “viability.” And the court admitted that because of advances in the medical field since Roe, the point of viability was sooner than believed in 1973 (23 to 24 weeks, rather than 28 weeks). Moreover, Casey also recognized that future advances in the medical field could show that the point of viability comes even sooner than believed then (in 1992).

Fast forward to our world today, and it’s astonishing how far we’ve come since Roe (1973) or even Casey (1992). The two main images for this story are 1) a shot from a Picker ultrasound about the time of Roe and 2) a child of the same age, via today’s amazing 4-D technology.

In 2017, Courtney Stensrud’s daughter was born in Texas at just 21 weeks, weighing less than a pound. Lyla is now 4 years old and healthy.

Fetal surgeries (in utero) are becoming more common. In Cleveland in May 2021 a tumor was removed from an unborn baby’s heart within the uterus. The surgery was performed 10 weeks before the baby was born (prematurely).

This would have all seemed like The Jetsons back in 1973. But looking back, Roe looks like the The Flintstones. “Progressives” need to stop being science deniers.