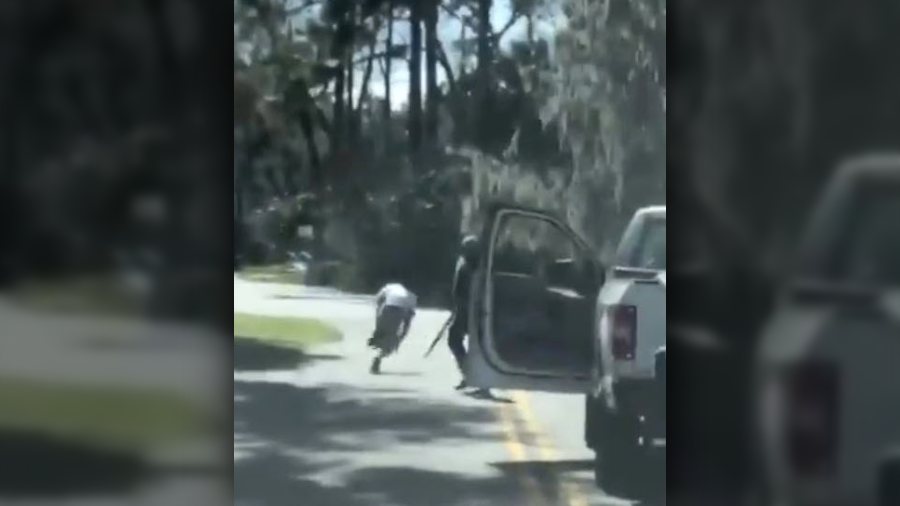 Video screenshot from February 23 of Ahmaud Arbery falling to the ground after Travis McMichael shot him. He bled out on the spot. McMichael has not been arrested.

I am not trying to be woke, nor am I trying to present myself as a social justice warrior. And I certainly feel no guilt being a white American, the grandchild of Jewish immigrants from Russia and England. I simply want to offer some questions for self-reflection. Fair enough?

On a regular basis, sometimes several times in a day, I interact with a black Messianic Jewish colleague who is also an educator and historian. He will often send me news stories with the simple goal of asking me to consider whether there are some serious inequalities that remain in our nation.

The other day he asked me an interesting question, and I thought it would be worth passing on.

What Would Our Reaction Have Been If These Armed Protesters Were Black Men?

Most of us have seen photographs and video footage of the April 15 protest in Michigan, where men armed with guns gathered outside of Michigan’s capitol building, angry with Gov. Gretchen Whitmer’s extreme stay-at-home orders.

Even Sean Hannity was critical of the protestors, saying, “This, with the militia look here, and these long guns, uh… no. Show of force is dangerous. That puts our police at risk. And by the way, your message will never be heard, whoever you people are.”

Some of the men actually went into the halls of the Senate, where they shouted out from the balcony.

No one was arrested, and there was no violent confrontation with the police.

Yet no one was arrested, and there was no violent confrontation with the police.

My black friend asked me a simple question: What if these had been black men, not white men, armed with what Hannity called “long guns”? Yes, what if it was well-armed black men who had stormed the Senate building? What would our reaction have been? And how would the police have responded?

Again, my purpose here is not to demonstrate how woke I am, nor is it to again denounce white supremacy, a term that is sometimes applied too liberally. It is simply to ask an honest question for our reflection.

You might say, “But that’s totally hypothetical. Why even raise the question? Who knows what the response would have been?”

Then let’s try another news story, also sent to me by the same friend.

Black Man Murdered on Feb 23 on Tape, But No One Has Been Arrested

On February 23, a 25-year-old black man named Ahmaud Arbery was shot dead by two white men as he jogged through the Satilla Shores neighborhood. The shooters, Gregory and Travis McMichael (father and son), said they thought that Arbery, who was jogging down the street and wearing shorts and a t-shirt, looked like a burglary suspect involved in several break-ins in the area.

They followed him in their pickup truck, then Travis got out and stood in front of Arbery, holding his gun (another “long gun”).

When Arbery tried to get around him, Travis shot him three times, leaving him to bleed to death.

If the colors had been reversed, do you think you would have heard about this story much sooner?

The video footage, taken by a third pursuer on his cell phone, is sickening to watch. (Please do take a moment to watch. The men were armed with .357 magnum and a shotgun.)

Yet as of today, May 6, no one has been arrested for the shooting. No one.

According to police records, “[Gregory] McMichael stated [that Arbery] began to violently attack Travis and the two men then started fighting over the shotgun at which point Travis fired a shot and then a second later there was a second shot.”

Again, please watch the video and come to your own conclusions. Then ask yourself this: If the colors had been reversed, do you think you would have heard about this story much sooner? (The shooting took place on February 23, and the outrage is only growing now that the video is getting more attention.)

If a white jogger had been accosted by two armed black men who shot him in broad daylight and let him to bleed out, do you think there would have been an arrest made by now?

Thankfully, it is now reported that Tom Durden, “a Georgia prosecutor assigned to examine the case … announced on Tuesday he plans to have a grand jury hear the evidence in the shooting.” Let justice be served, let all the facts come out, and let the chips fall wherever they may. (Sadly, whatever the grand jury decides, it will not bring Arbery back.)

But, returning to my friend’s perspective, he made this comment about this particular story: “See,” he texted me, “sometimes it’s not about the stats but about a culture that allows the death of bipoc [meaning, black indigenous people of color], regardless of number, to go unchallenged for so long that most people’s initial response is ‘What did the black guy do?’ as opposed to ‘Why did they take his life like that?’”

Most people’s initial response is ‘What did the black guy do?’ as opposed to ‘Why did they take his life like that?’”

Those are very fair questions to ask. Do you agree?

As lovers of the Lord, let us be lovers of justice and righteousness too. It’s biblical, you know.