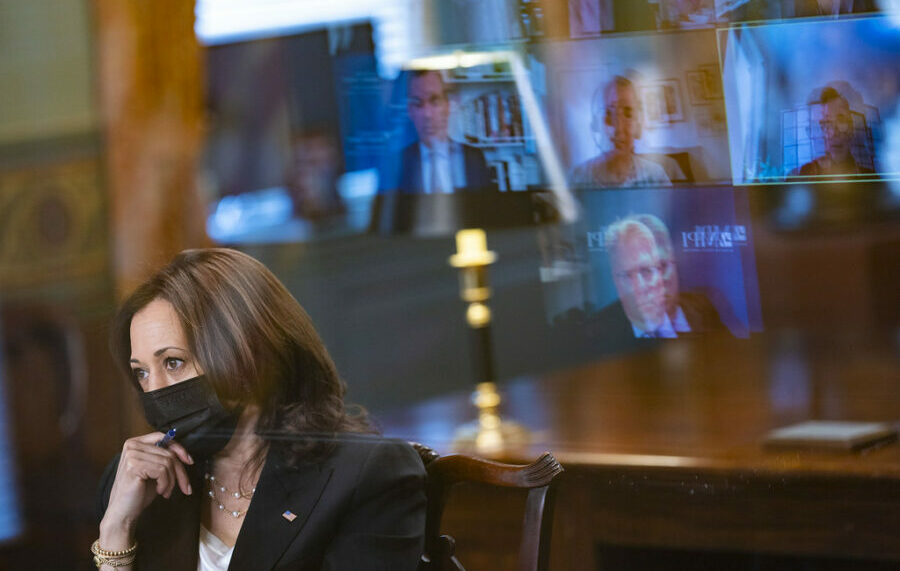 Vice President Kamala Harris participates in a Northern Triangle virtual roundtable with experts on the region on Wednesday, April 14, 2021, in the Vice President’s Ceremonial Office in the Eisenhower Executive Office Building at the White House.

The Democrats … to say nothing of the country … are in a real fix.

Joe Biden is clearly incapable of executing the office of President. His behavior this week, and interview with George Stephanopoulos, end all doubt of that. Even the media and intelligence community that protected him during the election and installed him in the Oval Office are turning away from him.

Credible rumors report Kamala Harris has quietly been canvassing the Cabinet about invoking the 25th Amendment. Calls for his resignation are growing by the hour.

But here’s the Democrat dilemma. If Harris becomes President, the Democrats lose control of the Senate because there’s no VP around to break the 50-50 tie. And Senate Minority Leader Mitch McConnell can block any vote on a new VP. The radical Democratic agenda comes to a screeching halt.

Would McConnell have the guts to do that? Well, look what he did to block Merrick Garland’s nomination to the Supreme Court.

But McConnell’s also a Swamp creature … and it’s one thing to hold off on a Supreme Court nomination until after an election. It’s another for the United States not to have a Vice President. Especially since something could go wrong with Harris, and then one Nancy Pelosi takes over as President.

So, what to do, what to do? Yes, I hear the shouts “Force Harris to pick Trump as VP!” Sorry. Not going to happen.

I suspect McConnell would cut a deal with Harris and Majority Leader Schumer to let a VP nomination through, if Harris agreed to pick someone who wasn’t a radical or a loser. Politically, the Democrats would need to make nice. Psychologically, the nation would need a grown-up. Personally, Harris would need someone who’s not a threat to her future ambitions.

So is there anybody floating around who …

… is a Democrat or at least has voted that way.

… wouldn’t appear to Harris as a threat. (That eliminates Hillary Clinton…or Elizabeth Warren.)

… is well-known enough to have immediate credibility and stature domestically and internationally.

… is a steady soul, a grown up. No crazy leftist.

… yet (Democrats being Democrats) checks off one of the intersectionality boxes. In other words, isn’t a white male.

… has vast and wide experience in government, has maybe even worked with Democrat and Republican presidents.

and given the diplomatic and military disaster of Afghanistan, could help restore the integrity of the State Department and Military. Or at least project that illusion?

Hard to imagine there is such a person. But we actually do have one floating around the speaker’s circuit.

So here’s your deal. Biden steps down. Harris names as Vice President former Secretary of State and Chairman of the Joint Chiefs of Staff Colin Powell.

Powell Checks All the Boxes

Gen. Colin Powell checks off all the boxes. Yeah, he’s a liberal globalist who is partly responsible for the mess we got into in Iraq and Afghanistan. But the point is, we need a figure who would instantly project stability at home and credibility abroad.

His leadership during the first Gulf War hearkens to a time when the U.S. military wasn’t woke, but just took care of business. He’s been both Secretary of State and Chairman of the Joint Chiefs of Staff. The current occupants of those jobs are disasters. As VP, he could become de facto top diplomat and top military advisor.

Powell has worked in White Houses for Democrats and Republicans going back to when he was a young officer assigned to the Carter Administration.

Kamala Harris is hapless, with horrible instincts and no foreign policy experience. Having Colin Powell as VP gives her an in-house tutor. Powell’s also got the clout, and has been playing the game so long, he’d be able to out-maneuver any young guns who would lead Harris astray. Or seek to sabotage her. It’s a long-shot, but Powell could create the space for Harris to grow into the role.

Also, Powell is personable, which could help minimize Harris’ unlikability.

Plus, Powell rejected offers to run for President when he was at the height of his fame. Meaning, Harris won’t need to be looking over her shoulder. If he wanted the gig he would have taken it when Harris was still canoodling with Willie Brown.

All told, Powell’s the kind of a pick that would make the public breathe a little easier. Our friends breathe easier. And our enemies stop doubling over in laughter.

Is It the Best Possible Solution? No. But It’s a Way Through.

Is it the best possible solution to the fix the nation is in? No. That would be recognizing the 2020 election was a fraud, figuring out a way to re-install the duly elected president. Then for Donald Trump to make bipartisan policy and personnel choices that help get us through to 2024.

But that’s not where we are right now.

Joe Biden has to resign, retire or be forcibly removed. Now. We cannot have a leaderless country run by anonymous staffers, with a president who is not only out of it but being mocked by our enemies and condemned by our friends. It is suicidal. (To say nothing of being cruel to Biden himself.)

The Democrats have to put the country ahead of their partisan legislative aims. Cut their losses.

And Kamala Harris would have to name as VP someone with the skill set and reputation to instantly garner international respect, soothe domestic turmoil, and help her with the nuts-and-bolts of running the country.

I am not a huge fan of Colin Powell. But I am a fan of America. And if someone has a better idea, I’m all ears.