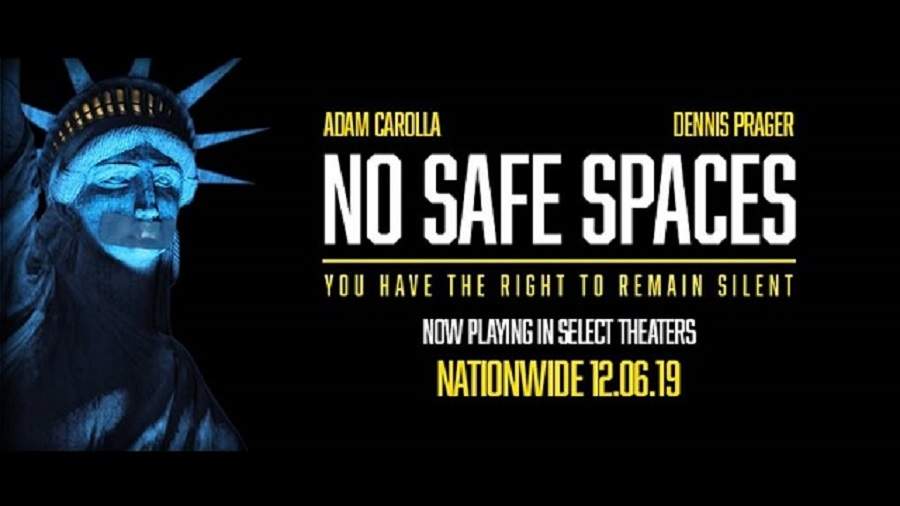 I watched No Safe Spaces, starring conservative radio host and author Dennis Prager and the world’s biggest podcaster, Adam Carolla. It’s a wonderfully well-made, gripping exposé. It shows how young people, especially students, increasingly reject our Constitution. You’re helping to get the film to college audiences. Can you tell us more about it?

Jason Jones: A majority of people surveyed under age 26 don’t approve of the First Amendment itself. They think that speech which they hate amounts to “hate speech.” And it shouldn’t be legal. Colleges, social media giants, and the Mainstream Media ought to collude in repressing it. The government shouldn’t protect it. Maybe even should punish it.

That has me worried. The best thing about America, about the whole Anglo political tradition, is freedom. Not license. Developing the virtues and living up to the dignity God implanted in every human being whom He made in His image. Protecting yourself and your family from violence. Exercising your basic political rights to speak out. Freely practicing your religion in the public square. Arguing frankly and courageously about ideas. These are the core values our soldiers and sailors, airmen and Marines fought for over centuries. They’re the things that people in less happy parts of the world often say they want. Think of the Uighurs in China, the protestors in Hong Kong, the Kurds, Yezidis, and Christians fighting Islamist gangs in Syria.

These values are the beating heart of freedom. They’re what you and I wrote about in The Race to Save Our Century. To see young people afraid of such freedoms is heartbreaking to me as an American and as a parent. My sons and daughters will have to live in the society that results.

A big theme of the film is that education is meant to strengthen young people, to build up their intellectual and emotional immune systems. Can you talk about that?

In a liberal society, we don’t educate people by hammering precepts into their heads until they’re zealots. We teach our system’s basic principles, but expose people to angry, even extreme critiques of it. That way they learn how to answer such critiques, maybe learn from them, while remaining committed to freedom. Nicholas Nassim Taleb speaks of Anti-Fragility as the natural outcome of that.

By the grace of God, people become stronger by repeatedly encountering challenges and questions. So respecting the dignity of the human person also produces a stronger society. I want a society that allows people to reach for God. Freedom makes that possible. Totalitarian, dogmatic, theocratic societies cramp the human person, prevent their authentic search for God. A Muslim friend of mine, an Iraqi general, said to me what was unique about America to him. He didn’t see Muslims anywhere, but saw Islam everywhere, because he saw people reaching constantly for God.

Intellectual challenges, clashes of culture, religious questions and answers. These are the things we need to help our young people to welcome, by giving them solid grounding in our own beliefs and culture. By teaching them logic, rhetoric, history, and other crucial disciplines that let them courageously face a world full of differences, deceptions, even threats. Without that grounding, they’re clay in the hands of the secular culture. It wants to shape them into fragile, reactive, and finally obedient consumers. Tame voters whom elites can command via memes, group-shaming, and propaganda news reports.

As Dennis Prager says, “America is meant to be the ultimate safe space,” where each of us can freely speak and learn. That’s the natural outcome of our liberal tradition, and the anti-fragility it produces.

“No Safe Spaces” shows that our society seems to be aimed at doing the opposite of making young people strong… .

Absolutely! From helicopter parenting to suppressing sex and cultural differences in primary school, to censoring free speech in college. We’re treating kids like fragile “snowflakes” who will melt down at the first hint of heat. Unprepared to face challenges, they freak out and sometimes turn violent when someone as mainstream as Ben Shapiro disagrees with them.

In some areas we have overprotected this generation and treated them like the “boy in the plastic bubble.” But in other, more crucial arenas? We’ve left Generation Z completely vulnerable, failed to do our one job of guaranteeing for them a decent, safe childhood and adolescence. If Generation Z has a lot of “snowflakes,” whose fault is that? It’s ours. We’ve been running the snow-making machine.

What exactly do you mean?

We’ve offered the current cohort of students, Generation Z, a much less safe life than you and I had. Even though we were riding bikes without helmets, sitting in cars without seatbelts, breathing our parents’ second-hand smoke and eating Chef Boyardee. But we were much, much safer in the important ways than the people heading off to college today.

We didn’t grow up with smart phones that let bullies photograph every dumb-looking thing we were wearing. Or the stupid looks on our faces when we tripped and fell. Then post it on Instagram to everyone in our school, even our neighborhood. If you threw up after a high school party or I got an ugly mullet, there was zero chance of it becoming a meme that thousands of people laughed at. Ugly gossip, degrading nicknames, dirt about our families … none of that went to a worldwide audience via Facebook.

Being a young person nowadays is in some ways like being a celebrity, with paparazzi following you everywhere. Waiting for you to screw up so they could pounce, and share it with the world.

Heather Wilhelm writes about this at National Review.

Unless you’ve stuck your head underground for the past five years, you’ve likely noticed the growing reams of stories detailing the apparent correlation between the Internet, smartphone technology, and a striking rise in mental illness in young people. San Diego State University psychologist Jean Twenge has written about this in detail, noting how youth depression and anxiety and suicide attempts have surged since 2009. This, of course, is when smartphones began to take over the world.

It wasn’t till I watched this film for the tenth time and talked to college students about it that I realized the truth. This isn’t a generation of snowflakes who want college to be a safe space because they’re weak. It’s a generation that has never had a space space in its life.

We let them grow up traumatized by the ugliest, nastiest videos that the Marquis de Sade could have dreamed up. And badgered, humiliated, by online shaming, gossip, and groupthink. All of this the left (and many libertarians) pretend is what the First Amendment was meant to protect.

No wonder these kids feel fragile. Big surprise that they want to be protected from something. Sadly, the only thing our culture is willing to “protect” them from is … dissenting ideas. Other people’s religious beliefs. Political arguments. The very things, in other words, that our Constitution was written to protect.

When Gen Z kids bitterly say, “Okay, Boomer” to dismiss the opinion of anyone over age 26 … this is the source of that bitterness.

So I hope people see this film, to see just how much damage the wrong kind of freedom has inflicted on young people. And the extent to which this has driven them to fear and reject true freedom, of the kind our Founders wanted.