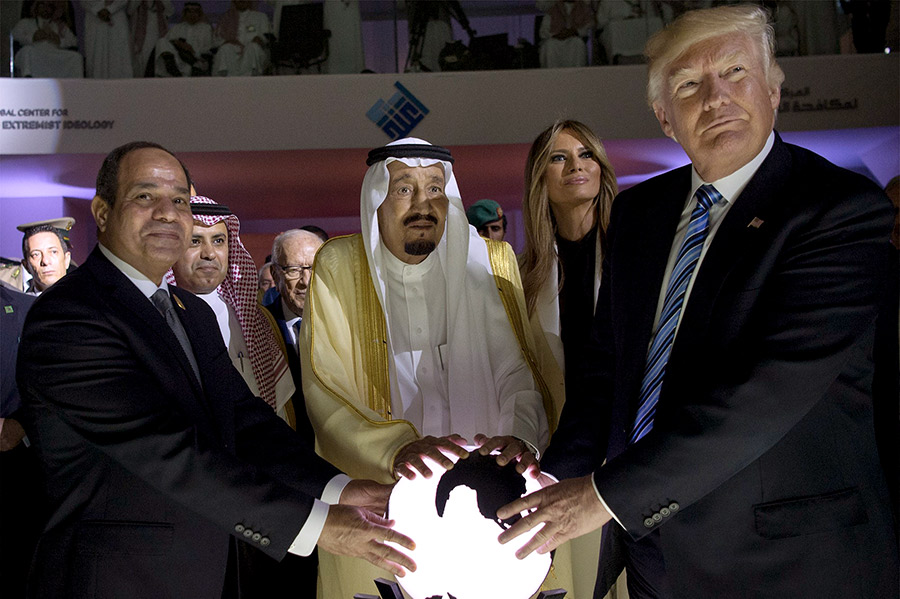 President Trump won the nomination in part because of his pledge to avoid more “stupid wars.” Americans knew that they’d been lied to, fleeced and bled by interventionists who lured us into Iraq.

The promise? For those who’ve forgotten: We’d make Iraq into a modern democracy with religious freedom, whose oil would more than pay for the cost of the war. Instead we got a quagmire, the genocide of 750,000 Christians, thousands of dead Americans, and trillions of dollars poured into the sand. Oh yes, and Iraq became an ally of Iran. Then, Obama won in a landslide, stacking the Supreme Court, which gave us same sex marriage by just one vote. Kick-starting the persecution of Christian business owners right here.

But at least Saudi Arabia was happy. The country that produced al Qaeda, that exports violent jihad and Sunni fundamentalism around the world, saw its rival Iraq brought low. It could now collude with Turkey in bringing al Qaeda allies to power in Damascus. That was the messaging piped through the War Party’s Rube Goldberg of think tanks, interest groups, and dutiful politicians. So it’s what most of the GOP candidates in 2016 duly repeated. Except for three: Rand Paul, Ted Cruz, and Donald Trump. Americans didn’t want to risk a war with Russia for al Qaeda’s sake. (Go figure!) That’s one of the reasons they nominated Trump instead of Rubio, for instance.

Should We Get in the Middle of a Sunni/Shi’ite War?

Now the Saudis want the U.S. to hire out its servicemen and women to serve as Saudi proxies in a war against Iran. How will the War Party sell a conflict on behalf of an intolerant, absolute monarchy and theocracy, which bans Christian services even in foreign embassies, and oppresses its Shi’ite Muslim minority? Maybe they can prove that Iran exposed itself to coeds in college.

If there’s to be a conflict between one set of intolerant Muslim theocrats and another, why should our soldiers be dying in it?

If there’s to be a conflict between one set of intolerant Muslim theocrats and another, why should our soldiers be dying in it? Why consider the Saudis such an “important ally” if they’re too weak to defend themselves? Let the crybullies fight their own battles, if need be with Israel’s help. This is not our war. Not even close. President Trump shouldn’t bet his reelection, and our nation’s fate, on its unpredictable outcome.

Tulsi Gabbard in the Wilderness

Few U.S. politicians apart from Sen. Rand Paul have been talking about this candidly. One of the only others is the only sane Democrat running for president, Iraq war veteran Rep. Tulsi Gabbard. For her trouble, the Democratic party is rigging its own procedures to keep her out of debates. It doesn’t help that Gabbard rejects the abortion extremism of other Democrats, and opposes open borders.

Gabbard has forced the Democrats to shed the mask they’ve been wearing as the “peace party.” Likewise, President Trump’s wise decision to send John Bolton packing. Democratic Speaker of the House Nancy Pelosi called that decision “a symbol of the disarray that has unnerved our allies since day one of the Trump Administration.” For Democratic leadership to speak so glowingly of John Bolton, a George W. Bush White House alumnus and icon of interventionist foreign policy? That’s proof enough that there is little room for the anti-war movement in today’s Democratic Party.

The Democrat Wing of the War Party

But the evidence doesn’t stop there.

In fact, it’s the mainstream left itself that’s been digging the grave of the anti-war movement for years.

When President Barack Obama’s drone program struck down dozens and dozens of civilian children in places like Pakistan and Yemen? The establishment left said hardly a word about it, then pushed for his reelection.

The U.S. dropped 26,171 bombs during Obama’s last year alone. Instead of confronting the administration, the mainstream left busied itself trying to install Hillary Clinton. They wanted Obama’s ferociously hawkish former Secretary of State as our next president.

Since President Trump’s election, leading Democrats have become the foremost war-jockeys in American politics. They goad the U.S. and other Western powers to antagonize a nuclear-armed Russia. They demand yet another Iraq- and Libya-style regime change war in Syria.

Gabbard stood almost alone in questioning the Obama administration’s foreign policy as a member of the House Foreign Affairs Committee during his last four years in office.

In February of 2016, she publicly criticized the DNC’s backroom dealing to clinch the nomination for Hillary Clinton. Remember, as a candidate Clinton promised to ramp up military conflicts in Syria, and threatened to shoot down Russian aircraft in the region.

And since the election, while other Democrats have lambasted President Trump willy-nilly, Gabbard has been the one to challenge the administration on the basis of a consistent, coherent foreign policy.

For example, while Pelosi slammed Trump’s decision to fire Bolton this week, Gabbard was the one Democrat to raise the substantive question: If Trump intends to fulfill his campaign promises against neocon foreign policies, why did he hire Bolton in the first place?

Democrats: At War with the Anti-War Movement

And after all this, how have the mainstream left responded to Gabbard?

Well, their surrogates in the media have taken every opportunity to grill her on her foreign policy priorities. They have even resorted (as CNN’s Anderson Cooper and CBS’s Stephen Colbert did) to smearing her as an agent of Russian President Vladimir Putin, or a supporter of Syrian dictator Bashar al-Assad. That smells of desperation.

Big tech companies worked hard to skew the 2016 election in favor of war candidate Hillary Clinton. They are now cracking down on Gabbard’s campaign. So blatantly that Gabbard has opened a lawsuit against Google.

In addition, the Democratic National Committee (Hillary’s puppet in 2016) has excluded Gabbard from the latest Democratic primary debate. Their justifications for the decision to exclude her are murky enough to have drawn the attention of many on the left. Democrats are losing faith in the integrity of their own party.

If the anti-war movement ever hopes to regain traction on the Left, sincerely anti-war Democrats will have to change all this. And when they try, they will face their stiffest opposition from the left itself.

Supporters of Tulsi Gabbard are learning this the hard way.