Should We Emulate the Table Flipping Jesus? 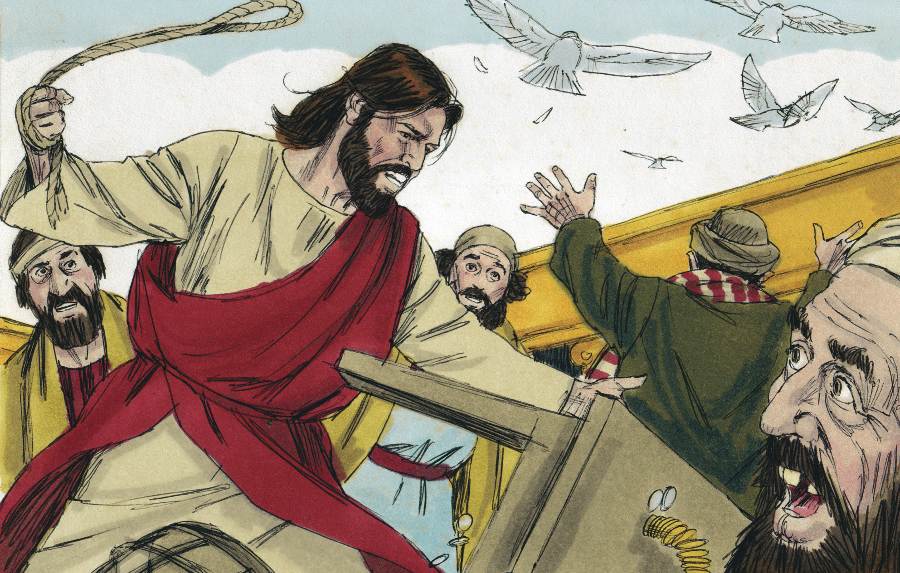 In response to a recent article I wrote on how to love our political and ideological enemies, a reader commented, “We are past all of this to the table flipping, ‘brood of vipers’ phase now. This hippie Jesus everyone wants to portray is a blasphemy.”

In other words, there was a time when a pacifistic, hippie-like Jesus could teach such things. But as His ministry continued and the opposition got worse, He adopted a new strategy, denouncing His enemies as a “brood of vipers” and flipping the tables of the corrupt money changers.

To be sure, this negative comment was overshadowed by the flood of comments saying, “Amen!”

Still, we should ask: Is there any truth to this line of reasoning?

Not in the least.

We should hate evil. … But we should love our enemies, not hate them. Otherwise, we become like them.

Let me break this down point by point.

First, before Jesus ever spoke the words “love your enemies” in the Sermon on the Mount, John the Baptizer had already denounced the religious hypocrites, calling them “a brood of vipers” and threatening them with hell fire. (See Matthew 3:7-12.) It’s not as if they suddenly became bad and Jesus now had to adjust His teaching.

In fact, throughout His ministry, Jesus called out the religious hypocrites. So rebuking them was nothing new.

We’re Called to Love the Very People Who Persecute Us

Second, in the Sermon on the Mount itself, before Jesus called us to love our enemies, He told us that we would be hated and reviled and persecuted for His name’s sake, likening us to the prophets of old (Matthew 5:10-12). Yet it was these very people, those who would hate and persecute us, that He called us to pray for and to love.

Some of the ‘Enemies’ of Jesus’ Day Were Deadly

Third, the very teaching that Jesus rejected, namely, that we should love our neighbors but hate our enemies, was grounded in a very real Jewish world in which the “enemies” were very real, even deadly threats.

Jesus commanded His disciples to love them, not hate them.

To be clear, as I stated in this same article, Jesus “is not saying that we should stop opposing destructive ideologies. He is not calling for moral or cultural or political apathy. He is not requiring us to soften our convictions or lower our standards. Quite the contrary. Love does not mean passivity. Love does not mean compromise.”

At the same time, Jesus pointed to the example of His heavenly Father who causes His sun to shine and His rain to fall on the good and on the evil. That, the Lord taught, is the example we are called to follow.

Paul Was Brutally Beaten for the Gospel, Yet He Said This

Fourth, when Paul called on his readers not to take revenge but rather, if our enemy was hungry, to feed him and if he was thirsty, to give him drink, he had already been brutally beaten and persecuted for the gospel. Still, his words were clear: “Bless those who persecute you; bless and do not curse.” (Romans 12:14)

This was not the “hippie Paul.” This was Paul the man of God, calling us to walk in spiritual maturity.

Jesus Died for the People Whose Tables He Flipped

Fifth, and most importantly, the same Jesus who called out the religious hypocrites in the strongest of terms and who flipped the tables of the money changers then laid down His life for these very people just a few days later. As Paul wrote, “God demonstrates his own love for us in this: While we were still sinners, Christ died for us,” pointing out that we were reconciled to the Lord “while we were still enemies.” (Romans 5:8, 11)

So, Jesus not only called us to love our enemies, He led the way by dying for His enemies. And it is that behavior and attitude that the Word of God calls us to follow.

As Peter wrote, “To this you were called, because Christ suffered for you, leaving you an example, that you should follow in his steps. ‘He committed no sin, and no deceit was found in his mouth.’ When they hurled their insults at him, he did not retaliate; when he suffered, he made no threats. Instead, he entrusted himself to him who judges justly.” (1 Peter 2:21–23)

If We Hate Our Enemies, We Become Like Them

In contrast, nowhere does the Word say to us, “Grab a whip and drive out the animals from the Temple and overthrow the tables of the corrupt money changers.”

To do that would be to let loose all kinds of carnal behavior and justify all kinds of sinful acts. “Hey man,” we would exclaim, as we kicked over tables at a gay pride event, “I’m just following the example of Jesus!”

Unfortunately, to this day, people use the Lord’s strong rebukes of corrupt religious leaders as an outlet for their own fleshly anger and judgmentalism, failing to realize that the Lord only spoke what His Father gave Him to speak and that all of it was spoken in perfect love.

And let’s not forget that, in all our supposed righteous indignation, none of us are Jesus. Just a friendly reminder!

Again, that does not mean that we do not hate evil. To the contrary, in the same chapter we quoted from earlier, Romans 12, Paul wrote, “Hate what is evil. Cling to what is good.” (Romans 12:9)

We should hate evil. We should burn with holy anger over the destructive works of the flesh. We should be moved to godly action. Yes, yes, and yes!

But we should love our enemies, not hate them. Otherwise, we become like them.

And when we dismiss the words of the Lord as those of a “hippie Jesus,” we only expose our own ignorance of the character and ways of the Lord.

Let’s Take Back the Word ‘Hate’ From the Left

Trump Says During Christmas Service That Jesus, Not Him, is the Savior America Needs