He's not polling in the top 10 GOP candidates, counting on his populism and Catholicism to distinguish himself enough from the rest of the field. 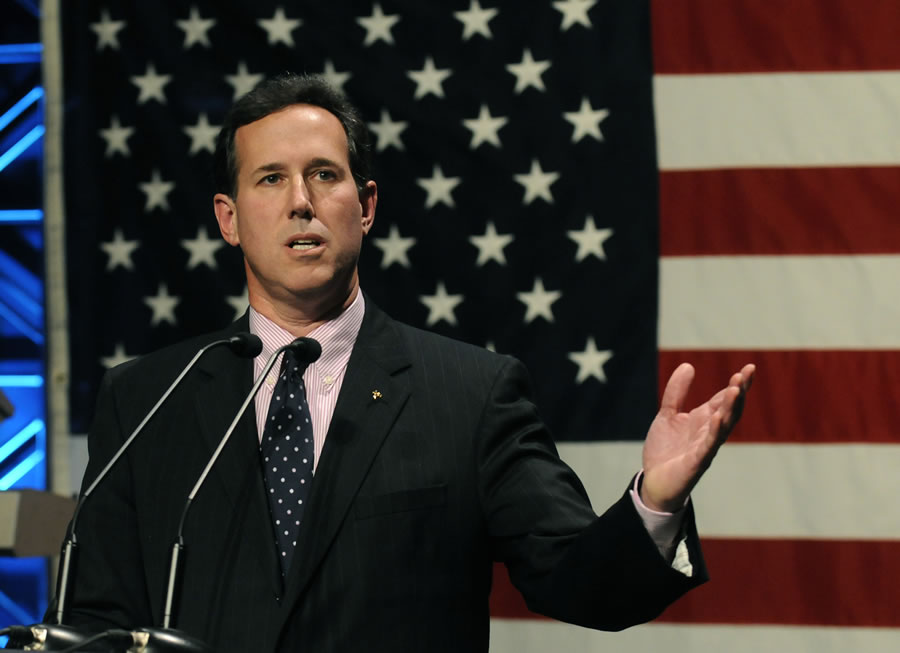 Former U.S. Senator from Pennsylvania Rick Santorum, who unsuccessfully ran for president in 2012, announced Wednesday he is running again. A sweater-vest wearing populist who champions the working class and Catholic values, the 57-year-old appeals to a distinct segment of the Republican base. He made the announcement Wednesday at a manufacturing plant in Cabot, Pa., where he grew up. Flanked by factory workers and his family, he announced, “I am proud to stand here, among you and for you, the American workers who have sacrificed so much, to announce that I am running for president of the United States.”

Santorum’s grandfather worked in the coal mines, and his father emigrated from Italy to the U.S. as a child. Santorum graduated with honors in political science from Penn State, where he served as chairman of the university’s College Republicans. He became an attorney and met his wife while working at the same law firm. They have seven children, whom they homeschool.

Santorum started his congressional career as one of the “Gang of Seven,” a group of freshman Republican U.S. Representatives elected to office in 1990 who took on the old guard for corruption, including the House banking scandal and the Congressional Post Office scandal. He won election to the U.S. Senate in 1994.

On social conservative issues, Santorum pulls no punches. He is one of the stanchest defenders of the unborn and the sanctity of marriage. While in the Senate, he led efforts to ban partial-birth abortion. He assured the audience during his announcement speech, “As president, I will stand for the principle that every life matters — the poor, the disabled and the unborn.”

He’s also known for something (inaccurately) called the “Santorum Amendment.” During the 2001 debate over the No Child Left Behind Act, Santorum proposed (and the Senate overwhelmingly approved) a resolution encouraging schools to guarantee freedom of debate in the classroom when covering controversial scientific topics like biological evolution. Santorum’s resolution was ultimately included in modified form in the Act’s Conference Report, which encouraged schools to “help students … understand the full range of scientific views” on topics such as biological evolution.

He lost reelection to the Senate in 2006 after endorsing liberal Republican Arlen Specter over conservative Pat Toomey in 2004 for the other Pennsylvania Senate seat. He achieved a lifetime rating  in Congress of 88.15 from The American Conservative Union, which is respectable but reflects a mixed record on fiscal issues. While in Congress, he voted for the unfunded Medicare prescription drug benefit and the No Child Left Behind Act. However, he has since disavowed those votes.

The Pulse 2016, which tracks the presidential candidates on conservative issues, rated him an A+ on how he handled the Indiana religious freedom bill controversy in March. Santorum takes a strong position against illegal immigration, saying it drives down wages.

Santorum wrote a book called Blue Collar Conservatives last year, in which he argued that Republicans need to appeal to working class voters in order to take back the White House. “I’d much rather my children know how to fix an eighteen-wheeler or enlist in the Navy,” he wrote, “than spend $150,000 to marinate in four years in the toxic ideology of academia while never missing a weekend party.” Approximately 70 percent of Americans do not have a college degree.

Santorum has said that he values faith over politics, and has become a more devout Catholic over the years. He attends Mass almost daily and began a study group for Catholics while in Congress. Earlier this year, he and his wife wrote a book together about their daughter who was born with Trisomy 18, or Edward’s Syndrome, called Bella’s Gift.

Fox News is already labeling Santorum a second-tier candidate, with plans to restrict him along with less popular candidates to an alternative forum during its August 6th presidential forum. Only the 10 candidates polling the best overall will be permitted to participate in the main debate. Santorum shot back in protest, “In January of 2012 I was at 4 percent in the national polls, and I won the Iowa caucuses. I don’t know if I was last in the polls, but I was pretty close to last.”

The Washington Post reports the breakdown of current polls:

Can Santorum Break Into the First Tier of Candidates?

While Santorum is Catholic, he has actually had more traction with evangelicals than Catholics. But with so many outspoken Christian conservatives in the race it will be hard for any one of them to leap to the front of the pack. Political analyst Larry Sabato “places Santorum third of three in what he calls the ‘Fourth Tier: Evangelical Favorites,’” after Mike Huckabee and Carson. Huckabee is also a populist, directly vying for the same working class votes as Santorum.

Although Santorum was the strongest 2012 candidate after eventual nominee Mitt Romney, many thought that was because no one else had a chance and he’d stayed in the race longer than was realistic. Also hurting him is he’s seen as a Washington insider.

One advantage is Santorum has the backing again of billionaire Foster Friess, who held a meeting in Arizona earlier this year to rally support for Santorum’s presidential bid. Friess contributed $2 million to a pro-Santorum SuperPAC in the 2012 race; without it, many think Santorum would have been forced to drop out. Friess was in the front of the audience near Santorum during the announcement speech.

If Santorum can distinguish himself from the other Christian conservatives in the race, and appeal strongly to blue collar workers, he might develop some momentum. Having run for president once before, he’s got experience with a national ground game and in debates that most of the other candidates lack. He’s tried and tested and has built up a trusted base of support. The GOP tends to give the nomination to those who have lost once before; Mitt Romney in 2012 and John McCain in 2008. It may be a long shot — but no one thought he would win the 2012 Iowa Caucuses either.