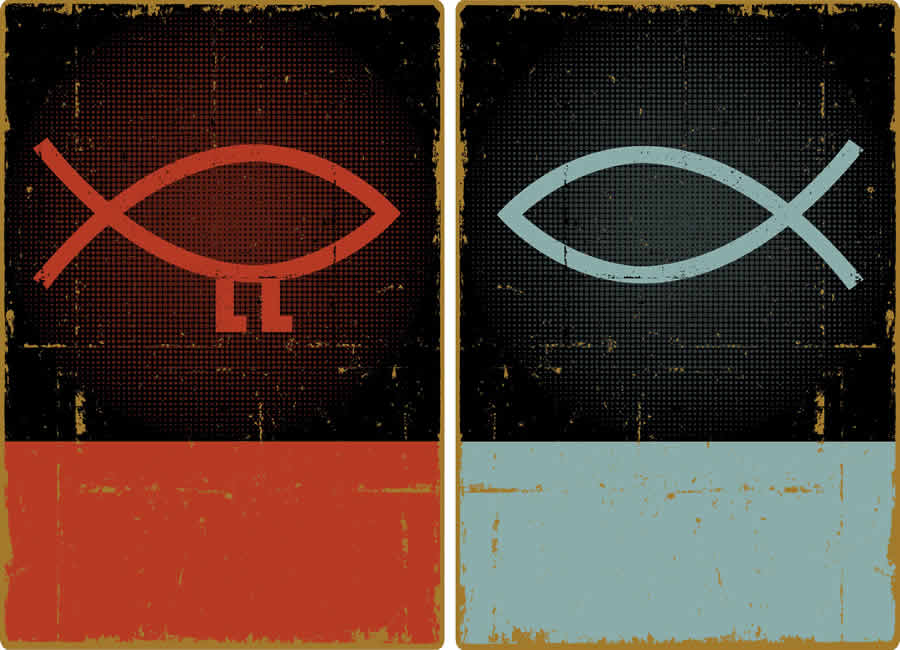 What’s the most important book for thinking Christians published in the past year? Many think it’s Stephen Meyer’s The Return of the God Hypothesis. As I argued recently, the rise of Darwinist materialism was the single biggest factor in hollowing our churches. A panicked retreat from every aspect of Genesis led to a total collapse of confidence in the Church’s authority to describe how things really are. So pastors decided instead that Christianity was a wistful picture of how things should be, and nothing more. One church after another transformed itself into a progressive political front group, culminating with my own Catholic church under Pope Francis.

Was Darwinism a Wrong Turn?

Was any of that even necessary? Has recent science raised profound uncertainty about Charles Darwin’s speculative effort to explain away the “appearance of Design” that pervades all life? How about the New Atheists‘ desperate attempts to wave off the plain implications of the Big Bang? Stephen Hawking’s sad, end-of-life efforts to replace the Creator God with … gravity? 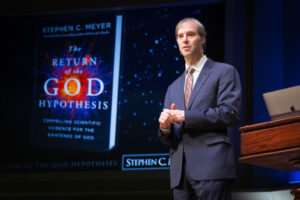 Since I was won over to Intelligent Design, from Theistic Evolution, I’ve read many thousands of pages. Among the most fruitful were those penned by Stephen Meyer, especially his trilogy: The Signature in the Cell, Darwin’s Doubt, and now The Return of the God Hypothesis. I asked Dr. Meyer to take time out of his busy schedule promoting his latest book to talk to The Stream. He addressed some deeper theological questions than most ID scientists usually wade into. The interview is below.

John Zmirak: First of all, thank you for your trilogy of books laying out the reasons why Intelligent Design is a more rational, and hence more “scientific” hypothesis than others. I was especially impressed with your ability to shift gears from physics to biology, and then to epistemology, engaging top level practitioners of each. Your latest, The Return of the God Hypothesis, is vastly ambitious. I think it rivals Aquinas’ Summa Contra Gentiles in that respect: a comprehensive “answer to the pagans.” How would you sum it up in 50 words for potential readers?

Stephen Meyer: Thank you John for your interest and for that extremely generous compliment. Return of the God Hypothesis argues — contrary to “new atheist” writers who often claim to speak for science — that recent scientific discoveries support belief in the existence of God. More specifically, it argues that theism — with its affirmation of a transcendent, intelligent and active creator — best explains three key scientific discoveries:

“Not Your Father’s Creationism”

What is the most interesting response that you’ve gotten from someone whom we might call a Darwinian materialist?

The most surprising response to my work to date has come from the New York University philosopher of science Thomas Nagel. Professor Nagel, who describes himself as an atheist, commended my first book Signature in the Cell in a review for the Times Literary Supplement in London. He then later published his own critique of Darwinian materialism in a book titled Mind and Cosmos: Why the Neo-Darwinian View of Reality Is Almost Certainly False. This despite still defining himself as an atheist.

How can God direct an undirected process? And if He’s not actively directing the process — as theistic evolutionists typically think — then in what way is He actually sovereign?

Since the publication of Return of the God Hypothesis, some former debating partners have offered what might be called backhanded compliments or, perhaps, grudging acknowledgments. Michael Shermer, an atheist and the editor of Skeptic magazine, recently conducted a friendly podcast interview and enjoined his audience to take the book seriously, characterizing it as “not your father’s creationism.” In a recent exchange, Lawrence Krauss, perhaps America’s most prominent scientific atheist, made clear that he completely disagreed with my arguments for intelligent design based upon the fine-tuning of the physical parameters of the universe. Nevertheless, he surprised me by complimenting “the breadth of my scholarship,” even saying it was “laudable.” Perhaps, the needle has begun to move a little bit in the debate.

I think that the default position for most thinking Christians who haven’t explored Intelligent Design is Theistic Evolutionism. It was my position, once. Do you think people adopt it as a “respectable” middle ground between, say, Young Earth Creationism, and pure Darwinism? I’ve read the 1,000 page collection, Theistic Evolution (to which you contributed). So I know the theological impossibilities that position embraces. It seems more accurate to call that position Deist than Theistic, doesn’t it?

I do agree, however, that many Christians are attracted to theistic evolution because it purports to offer a way to reconcile the findings of science with their belief in God. Nevertheless, theistic evolutionists have been famously diffident about saying what, if anything, they think God is doing to create life beyond upholding the laws of nature.

Instead, they affirm, as do secular evolutionary biologists, the creative power of the main evolutionary mechanisms such as natural selection and random mutation. These mechanisms were formulated as alternatives to the idea that God designed or directed the process of creation. After all, it’s “nature,” not God, that does the “selecting” in the natural selection and random mutation mechanism.

Thus, I do think this view is theologically and logically problematic. How, for example, can God direct an undirected process? And if He’s not actively directing the process — as theistic evolutionists typically think — then in what way is He actually sovereign over the process of creation?

In any case, my main objection to theistic evolution is not theological. It’s scientific. As I detail in my last book Darwin’s Doubt, even leading evolutionary biologists now doubt the creative power of the mutation and natural selection mechanism, and for many good scientific reasons. As evidence from across the biological subdisciplines shows, the mechanism can produce modest small scale modifications (or adaptations) to existing organisms, but it clearly lacks the ability to produce major innovations in biological form such as have arisen during the history of life.

Thus, it is highly ironic for Christians and other traditional theists to be insisting that natural selection and random mutation are “God’s way of creating” at just the time when evidential challenges to the creative power of mutation and natural selection are mounting and when even many secular evolutionary biologists are acknowledging these evidential problems.

What Are Our Unspoken Motives?

It seems to me that you — and the various other experts whom you cite — have done a magnificent job answering the standard rational objections to Intelligent Design. But there’s immense resistance in some people that goes beyond, and beneath, the rational. Some say that Charles Darwin himself was moved to reject divine Design after the death of his young daughter. Have you also found that the deeper motives of atheists or agnostics seem to be philosophical or personal, which explains many’s resistance to evidence and argument?

I think all human beings have competing internal motives for seeking God and for also suppressing the evidence of His reality. Clearly, a belief in God can give comfort to us in our human condition as we face our inevitable mortality. It also offers the prospect of finding lasting meaning and purpose in relationship to Him and the possibility of life beyond our short time on earth. On the other hand, none of us really like the sense of moral accountability that comes with an acknowledgement of the reality of God and his righteous law. Especially as we become more aware of our own moral failings.

Even so, pointing to the motives that we may have for either believing in, or rejecting, the existence of God does not help answer the question of what the relevant evidence tells us about the possible reality of God. Thus, in Return of the God Hypothesis, I try to analyze the relevant scientific evidence and assess which worldview or “metaphysical hypothesis” best explains it, irrespective of what any of us may want to be true.

Creator Red in Tooth and Claw?

You briefly touch in the new book on a difficulty that troubled me as a teenager: The fact that suffering and death on a massive scale in the animal kingdom predate any possible human sin by millions of years. So the picture of a peaceable kingdom depicted in Genesis seems unimaginable. It appears that the God whose existence your arguments strongly suggest exists, intended such horrors as parasitical wasps, mass extinctions, intra-species cannibalism … . The whole of “nature red in tooth and claw.” Blaming that retroactively on human sin that happened later seems … absurd. How do we square the circle? Maybe the way Aquinas did, by imagining mankind alone immune to the effects of “contingency” (and entropy) prior to the Fall? That’s the theory of the “preternatural gifts.”

I’m intrigued with the Thomistic theodicy as you describe it and appreciate a modern exposition of that idea in the work of my colleague William Dembski who, in addition to being an accomplished mathematician and scientist, is a trained theologian. His book The End of Christianity develops a theodicy similar to that of Thomas Aquinas and I commend it for the consideration of your readers.

Do you think that if we established the logical, scientific probability of a Theistic Designer, the next issue of controversy would be understanding how He is … Good, in any sense analogous to our own? Are doubts about that perhaps the strongest motivator for materialists, the unspoken objection that none of your scientific work addresses?

Different skeptics have different reasons for doubting the existence and benevolence of God. In Return of the God Hypothesis, I mainly address reasons for doubting the existence of God by showing that the evidence we have about biological and cosmological origins is best explained a transcendent, intelligence who is also active in the creation — i.e., a theistic, rather than a deistic, God. Nevertheless, I do think the creation itself, in the beauty and intricacy of its design, provides plentiful evidence of the goodness of God. So in the book, I also address the problem of “natural evil,” the problem of explaining those aspects of nature such as harmful viruses and bacteria that call into question God’s goodness.

In a long footnote at the end of Chapter 14 (for your readers who want to do do further study!), I argue that those proponents of intelligent design who also accept a biblical theology of nature have reasons to expect find both evidence of original design and subsequent decay of nature.

I further note that recent work in molecular and microbiology has shown evidence of both. The functional digital information in the genome provides powerful evidence of the past activity of a designing intelligence. And recent microbiological studies have shown that virulent strains of bacteria and viruses typically result from a loss or decay of an original endowment of genetic information. Thus, at the molecular and biological level we now see evidence of both original (good) design and subsequent decay, just what we should expect in light of the theory of intelligent design coupled with a biblical theology of nature.