In a letter to Lands’ End CEO Federica Marchionni, College of the Ozarks Vice President of Cultural Affairs Sue Head wrote that the clothing company’s “decision to feature a woman who is a well-known abortion activist as your Legend Series honoree, and to whom the company is giving a portion of proceeds for her organization, has resulted in our decision.”

The Journal-Sentinel also reported that another Missouri-based educational institution, Father Tolton Regional Catholic High School, also ended its relationship with Lands’ End due to the Steinem interview. On its Facebook page, the school said that “while Lands’ End has been one of Tolton’s official uniform providers since our opening in 2011, we cannot in good conscience continue that relationship.”

Lands’ End has been under fire this week for its interview with Steinem published in its spring catalog. Lands’ End has now apologized and scrubbed the interview from its website. Steinem has been a staunch proponent of abortion rights, saying she does not regret the abortion she had when she was younger, and insisting that a woman’s right to kill her unborn child is key to “equality” between the sexes.

“We understand that some of our customers were offended by the inclusion of an interview in a recent catalog with Gloria Steinem on her quest for women’s equality,” said the Lands’ End statement, which was issued to The Stream and other press outlets. “We thought it was a good idea and we heard from our customers that, for different reasons, it wasn’t. For that, we sincerely apologize. Our goal was to feature individuals with different interests and backgrounds that have made a difference for our new Legends Series, not to take any political or religious stance.”

Head told The Stream that the apology would not change the decision to end the college’s K-12 School of the Ozarks relationship with Lands’ end, which her letter noted has existed “since the School’s inception” in 2012 and totaled approximately $150,000 in purchases with the clothing company.

“That has no impact; it’s a little late,” said Head, “mainly because that this campaign has been in the works for months. It’s not like they thought of this last week and quickly did it. It’s part of their strategy, and so our trust factor right now with Lands’ End is very low.”

In her letter, Head told Marchionni that “in your short tenure as CEO, it is clear to me that you do not know who your customer base is yet,” and said that the clothing company had a “clearly leftist, pro-abortion agenda.” 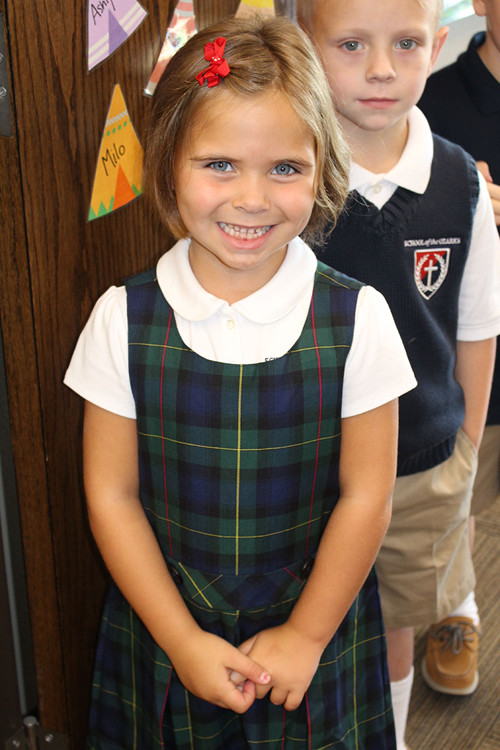 “All School of the Ozarks families have been invited to return one of their shirts purchased from the company, and by doing so, send a message in support of traditional values. They invite others to join them in the stand against the pro-abortion messaging put forth by Lands’ End,” said the school’s release.

In both her letter and comments to The Stream, Head said this was the second strike against Lands’ End. “Over a year ago, Lands’ End chose to send many of our families a GQ subscription as a ‘gift,’ which they neither knew about nor requested,” said her letter. “The cover of the first issue was a woman who was only wearing a lei. Needless to say after that debacle, Lands’ End was put on notice by our institution that the next time the company made a decision that conflicted with our values, we would be gone.”

Head told The Stream that while she doesn’t know if any other groups or schools would be dropping business relationships with Lands’ End, “I did have some responses from people who were taking it to their principals and superintendents of other schools.”

In their note to parents, Father Tolton administrators said, “We believe unequivocally that all life is sacred, from conception until natural death. It would be contrary to our school’s very identity to support a company who celebrates the work of someone so opposed to our beliefs, a company who is conducting a campaign ‘in honor of her work.'”

“For this reason, Lands’ End is no longer an official uniform provider for Fr. Tolton Catholic High School,” said the Facebook announcement, which clarified that “any clothes that your students have purchased from Lands’ End in the past are still suitable for wear in our school.”