Lands’ End has pulled down an interview with radical abortion feminist Gloria Steinem, and apologized to its customers.

“We understand that some of our customers were offended by the inclusion of an interview in a recent catalog with Gloria Steinem on her quest for women’s equality,” said the statement, which was issued to The Stream and other press outlets. “We thought it was a good idea and we heard from our customers that, for different reasons, it wasn’t. For that, we sincerely apologize. Our goal was to feature individuals with different interests and backgrounds that have made a difference for our new Legends Series, not to take any political or religious stance.”

Lands’ End is to be commended for their alacrity in response to this issue. They have shown sensitivity to patrons who felt it inappropriate that such political activism be celebrated in conjunction with what is broadly seen as a religious, family-based holiday. Although it will be interesting to see what steps the brand may take next, this decision should reflect positively with their consumer base.

Robert Kuykendall, National Outreach Director for 2nd Vote, says the quick action by Lands’ End should prove an inspiration. “By scrubbing the Gloria Steinem interview from its website and issuing an apology,” he said, “Lands’ End is proving that companies will respond when conservatives hold them accountable for their advocacy.”

However, as Kuykendall notes, questions do remain: “While the acknowledgement of their customers’ values is commendable, 2nd Vote believes that Lands’ End must still make assurances that our shopping dollars won’t be used to fund advocacy that stands in stark contrast to our values by publicly discontinuing its relationship with the ERA Coalition.”

A spokesperson for Lands’ End did not immediately respond as to whether this apology means they will no longer donate to Fund for Women’s Equality.*

The Stream also asked whether Lands’ End would feature a pro-life woman for its “Legends” series, for which Steinem appeared in the spring catalog.

Kristi Hamrick, spokesperson for Americans United for Life, told The Stream, “The vast majority of Americans don’t agree with abortion the way it’s practiced in America today, through all nine months of pregnancy, for any reason whatsoever, even for sex-selection and with taxpayer subsidies. The fact is, whether it’s Lands’ End or anyone else, you need pro-life voices, as well.”

The apology and website scrub came after the popular school clothes fashion company faced a barrage of criticism from pro-life and Christian customers through social media and other mediums. Several pro-life women told The Stream they opposed the juxtaposition of Steinem in the same issue that featured children engaging in an Easter egg hunt. 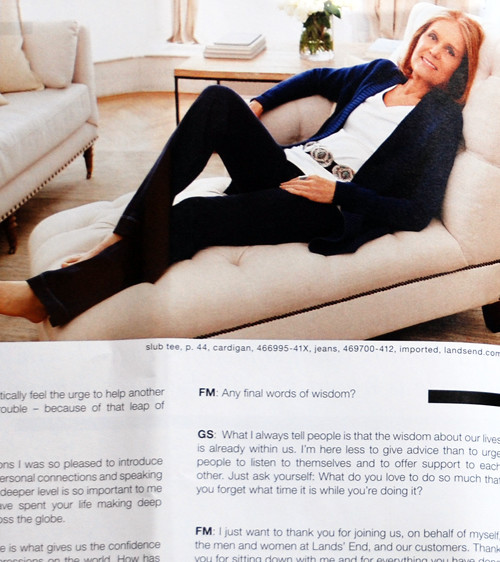 “This profile on Gloria Steinem — conducted by Lands’ End CEO Federica Marchionni, no less — is revolting,” Media Research Center reporter Katie Yoder told The Stream about the original spread. “A feminist who adores abortion and hates religion doesn’t deserve one inch in a catalog that also celebrates Easter and family.”

Regnery Publishing Senior Managing Editor Maria Ruhl called the juxtaposition “jarring,” while Institute on Religion and Democracy Director of Evangelical Outreach Chelsen Vicari said it was “heartbreaking” but “not surprising … to see a catalogue praise a perpetuator of the culture of death instead of celebrate a holiday dedicated to the cross and Christ’s triumph over death.”

Steinem is well-known for her decades of abortion advocacy. Last year, she said that she became a feminist when she covered the issue of abortion in the 1960s as a journalist. “If one in three of us in this nation, then and now, has had this experience [of abortion] at sometime in our lives, why is it illegal, why is it dangerous? Who owns women’s bodies, who says we can’t control our own reproductive lives?”

Other statements by Steinem include telling PBS that opposing Planned Parenthood is related to racism and “patriarchy,” and in 2013 saying that former Texas Governor Rick Perry “will go down in history as an authoritarian, a dictatorial, unacceptable American” for defunding Planned Parenthood. She has also blamed the pope for global warming and for not supporting abortion, said that economics classes “should start with reproduction, not production,” and believes that “​reproductive rights are a fundamental human right like freedom of speech.”

*This has been updated. The text originally said the “ERA Coalition.”