Sanders officially ended her White House run yesterday. Is a run for Arkansas governor in the works? 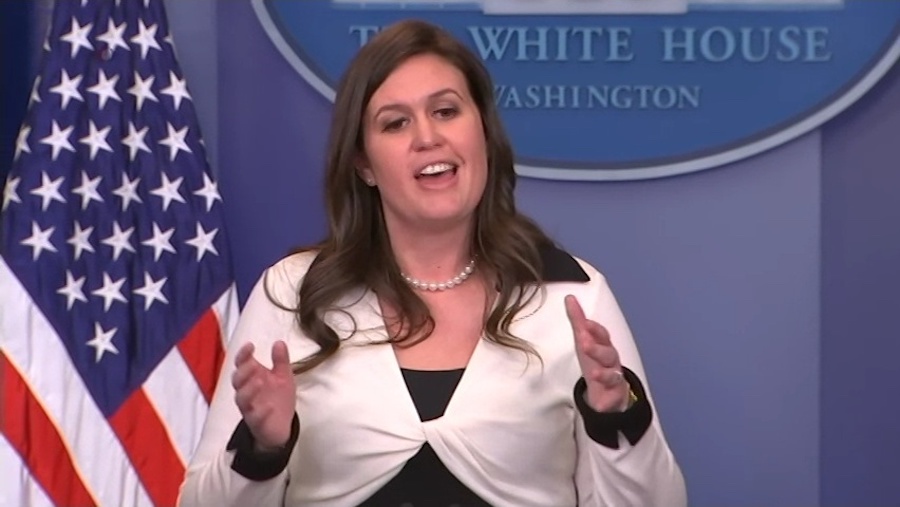 Love her or hate her, everyone knew who White House press secretary Sarah Sanders was. Steven Hayward of Powerline refers to her as “the best press spokesperson in modern times, as she has the perfect combination of unflappability and contempt for the contemptible press corps.” Only age 36, she held her own against older journalists, including the arrogant, hostile Jim Acosta of CNN.

She served as press secretary for almost two years, before officially stepping down yesterday. Although she didn’t hold any press briefings in recent months, she appeared with President Trump at prominent meetings. She served in more of an advisory role.

In May, 2018, when President Trump was being hounded for describing MS-13 gang members as “animals,” Sanders struck back hard. “If the media and liberals want to defend MS-13, they’re more than welcome to. Frankly, I don’t think the term that the president used was strong enough. It took an animal to stab a man 100 times and decapitate him and rip his heart out”

In June 2018, when asked about the policy of separating illegal immigrant children from their parents at the U.S.-Mexico border, Sanders responded that it was “biblical” to enforce the law. She blamed “legal loopholes that Democrats refuse to close.”

In September 2018, The New York Times published an anonymous op-ed entitled “I Am Part of the Resistance Inside the Trump Administration.” Sanders issued a scathing response the next day. She called the author an “anonymous coward” and “gutless loser.”

In January 2019, Sanders spoke of the man she served. “God calls all of us to fill different roles at different times,” she told the Christian Broadcasting Network, “and I think that he wanted Donald Trump to become president.”

In November 2018, Acosta was caught on video putting his arm on an intern’s arm during a press conference. The intern was trying to take the mic away from him at Trump’s request. The White House briefly took away Acosta’s White House credentials in response. Sanders released a video of the incident the next day from the controversial site Infowars. The site was accused of speeding up the video to make Acosta’s arm movement look more drastic. Infowars has been kicked off of social media for alleging things like the Sandy Hook victims were never really murdered.

Once, Acosta asked her about a tweet from Trump that said the fake news should be looked into. He wanted to know if Trump cares about the First Amendment as much as he does the Second Amendment.

He cares a lot about the First Amendment, she replied. But with it comes responsibility. When only 5% of the media coverage of Trump is positive, there is something wrong. She rattled off a list of accomplishments under Trump and said that shouldn’t only be given 5% coverage considering that’s what the American people care about.

Acosta asked Sanders about Trump referring to the news media as the enemy of the people. He tried to goad her into denying that it’s true. Sanders responded with a laundry list of how the press has mistreated her. “It’s ironic, Jim, that not only you and the media attack the president for his rhetoric when they frequently lower the level of conversation in this country. Repeatedly, repeatedly the media resorts to personal attacks without any content other than to incite anger,” she responded.

The media have often attacked her personally, she noted. The media did so “on a number of occasions. Including your own network said I should be harassed as a life sentence. That I should be choked. ICE officials are not welcomed in their place of worship,” Sanders said.

Sanders reminded Acosta of the April 2018 White House Correspondents Dinner where comedian Michelle Wolf took potshots at her. “When I was hosted by the Correspondents’ Association, which almost all of you are members of, you brought a comedian up to attack my appearance and call me a traitor to my own gender,” Sanders said. “As far as I know, I’m the first press secretary in the history of the United States that’s required Secret Service protection.”

Wolf said about Sanders, “I actually really like Sarah. I think she’s very resourceful. Like she burns facts, and then she uses that ash to create a perfect smoky eye. Like maybe she’s born with it, maybe it’s lies. It’s probably lies.” Wolf asked, “what’s Uncle Tom but for white women who disappoint other white women?”

She also compared Sanders to the brutal, unattractive Aunt Lydia in The Handmaiden’s Tale.

(At least at the White House Correspondents Dinner Sanders got to finish her meal. In June 2018, Sanders and her family were forced to leave the Red Hen restaurant in Lexington, Virginia because of the owner’s hatred of all things Trump.)

Another reporter asked her about criticism of Trump’s negotiations by Hillary Clinton, Barack Obama and John Kerry. Sanders responded, “I think based on those individuals’ lack of success in this entire process on foreign affairs they would probably be the last three people that we would look to for advice and counsel and whether or not we had made the right decision.”

And All the Other Controversies

A black female reporter asked Sanders if Trump is aware that the NFL players kneeling during the national anthem is about police involved shootings. Sanders said the president has made his position crystal clear. He thinks people should stand for the national anthem. It makes our country “special and unique and sets us apart.” He’s not going to waiver on that or apologize for it. More than 70% of Americans agree with him on that matter. The reporter tried to interrupt Sanders multiple times but Sanders cut her off.

A reporter asked Sanders when Trump was going to start working on comprehensive immigration reform. Sanders said Trump had just barely gotten back from a long overseas trip and needs to rest first. Then she pointed out that it’s the responsibility of Congress to make laws, not the president.

Once when asked about “chaotic turnover” at the White House, Sanders responded, “No, I don’t see it as chaos. If you want to see chaos, you should come to my house early in the morning when my three kids are running around. That’s chaos.”

What’s next for Sanders? She may be running for governor of Arkansas, following her father who served as governor there from 1997 to 2006. President Trump leaked at a reelection rally with her, “I have a feeling she’s going to be running for a certain gubernatorial position.”

The Left is Trying to Eliminate the Phrase ‘Fake News’