Is it any coincidence that Zechariah, writing more than 2,500 years ago, described how all the nations would unite to attack Jerusalem? 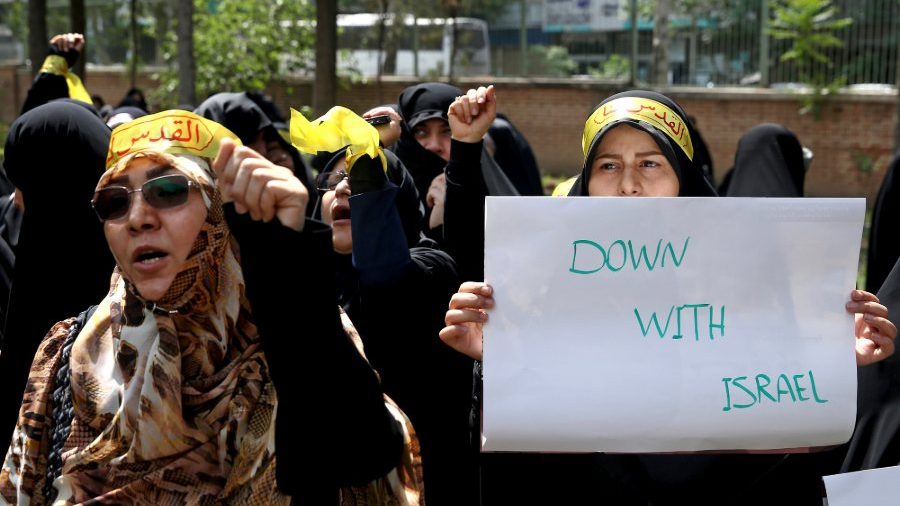 Iranian protesters attend a rally to show their anger over the deaths of nearly 60 Palestinians along the Gaza border on Monday, inside the former U.S. embassy in Tehran, Iran, Wednesday, May 16, 2018. Terrorist group Hamas has admitted that more than 80 percent of those killed on Monday were Hamas members.

Israel is slaughtering unarmed men! Israel is killing women and children! Israel is butchering babies! It’s time for the world to condemn this genocidal nation!

As I wrote in my last column, things are falling into place just as scripted by Hamas. The terrorist organization recruits and sends its young men on suicide missions. Israel responds with the expected force. The media reports the events along anti-Israel lines. Then the nations of the world rise up to condemn evil Israel.

I previously cited Aaron Klein and Melanie Phillips, both of whom pointed out how the secular media plays right into Hamas’s hands. Since then, David Friedman, our ambassador to Israel, also weighed in, dubbing the protests and the ensuing casualties “a public relations event.”

He said, “If I could give a word of advice to the media, if they purport to care so much about the Palestinian cause: this coverage of Palestinians running to the fence, burning tires — it’s the fuel or the lubricant for further malign behavior.”

He added, “there’s a reason why Hamas sends impressionable kids to the front, telling them that the border is safe to cross. They want them to be killed or injured, to make the front page of the paper.”

That is the satanic and cynical strategy of Hamas.

Alan Dershowitz made similar comments, claiming that when the media reports in such “a biased manner,” that “incentivizes and encourages Hamas.”

You use children and women, you deliberately put them on the front lines, you make it impossible for Israel to defend itself without occasionally killing a woman or a child or an elderly person. And every time Israel accidentally kills somebody like that, Israelis grieve. Israel loses. Hamas cheers and celebrates because that’s exactly what they want. They want the media to show the body count. They want the media to show the dead baby, even though Israel tried everything in its power to avoid civilian casualties.

It doesn’t matter that Hamas has admitted that more than 80 percent of those killed on Monday were Hamas members.

It doesn’t matter that the dead baby (seen with grieving mother), did not die at the hands of the IDF. (And why on earth would you bring an infant anywhere near the front lines of an active shooting site?)

It doesn’t matter that “a Hamas leader said in an interview that the terror group was ‘deceiving the public’ when it spoke of ‘peaceful resistance.’”

Turkish Prime Minister Binali Yildirim is now calling on the Islamic world to unite against Israel. “The Islamic world should move as one, with one voice, against this massacre,” he said.

And here in the West, celebrities are condemning evil Israel once again.

According to Chelsea Handler (on Tuesday), “Nikki Haley is on tv talking about Hamas being responsible for the Palestinians protesting yesterday. These people had no weapons. They had tires to burn. There was a dead baby. While Netanyahu celebrates.”

Bette Midler tweeted (specifically targeting President Trump), “Fifty-two people die in protest over moving American Embassy to Jerusalem. Thanks, a–hole! Your uninformed and demented actions have consequences! Don’t you get it? Those people had families too!”

Michael Ian Black was more succinct: “Two *thousand* wounded. This is a massacre.”

Did I say that things were playing out just as Hamas scripted?

Again, as I emphasized in my last column, I grieve over this loss of life as well, regardless of who is ultimately responsible for it. And I do not claim that Israel is perfect in all her actions.

Is it any coincidence that all this is taking place at the same time we relocated our embassy to Jerusalem? Is it any coincidence that Zechariah, writing more than 2,500 years ago, described how all the nations would unite to attack Jerusalem? (See Zechariah 12 and 14. This could speak of all surrounding nations, of a coalition of nations worldwide, or literally, of every nation.)

The plot thickens. (For a lucid, pro-Israel statement by Bret Stephens, published in the New York Times, no less, see here.)