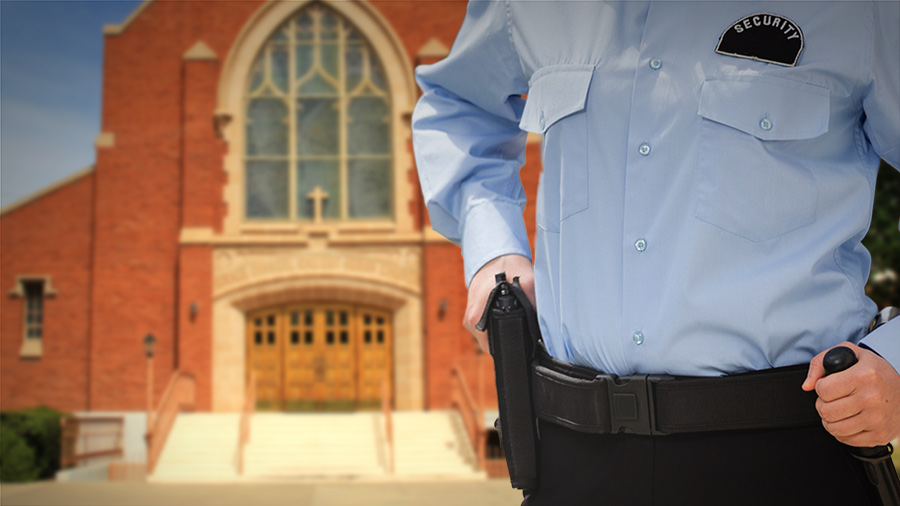 I don’t know if President Trump was right in calling for armed guards at all houses of worship. And I don’t know if stricter gun controls would lessen the ever-rising tide of bloodshed in America. But I do know bad arguments when I see them. And a recent article in the Huffington Post was replete with such arguments.

The article, written by Erin Schumaker, is titled, “Armed Guards Won’t Stop Mass Shootings Like Pittsburgh.” The subtitle reads, “President Trump’s suggestion to put armed guards in places of worship doesn’t have much evidence to back it up.”

Responding to Trump’s comment that, “If there was an armed guard inside the temple, they would have been able to stop him,” Schumaker wrote, “People who study mass violence typically reject this type of assertion.”

This, of course, begs the obvious question: Then why do so many companies and organizations hire armed security guards?

The answer might be: Guards like this will scare away your average criminal, but not a mass murderer.

Schumaker points to the massacre at the Pulse bar in Orlando, stating, “On the night [the killer] attacked Pulse nightclub in Orlando, Florida, the shooter first stopped at, then bypassed, Disney Springs and EVE Orlando, both of which had visible security outside, then went on to kill 49 people and wound 53 others at Pulse.”

To the contrary. She writes, “Security at Disney Springs and EVE Orlando didn’t stop a mass shooting that evening. They just relocated it.”

I mean no insult to Schumaker, but really now, you have got to be kidding me. How can this be taken seriously?

First, for the people at Disney Springs and EVE Orlando, the security guards apparently saved their lives. You better believe they’re glad those guards discouraged the killer from attacking there.

Second, if the Pulse had the same type of visible security, the killer might not have gone there either. (There was, in fact, a guard inside the Pulse who traded gun shots with the killer. But it would appear the security was not as outward and visible as at the other locations.)

Schumaker also references a more recent event, when “security measures deterred a gunman who tried to enter a predominately black church last week, but he went on to kill two people at a nearby Kroger supermarket.”

Again, I’m sure the members of that predominantly black church are grateful for those security measures. As for the people tragically killed at Kroger’s, perhaps if that store had those same security measures in place, the murderer would have left that scene as well.

Another line of argument raised by Schumaker is that, “In reality, many mass shooters are suicidal and do not expect to survive their attack in the first place.”

And she cites Adam Lankford, a criminologist at the University of Alabama, who asks, “To what degree does having armed guards deter people who want to be shot anyway?”

Once more, these arguments boggle the mind.

First, it would be far better to shoot and kill the murderer before he has slaughtered others than after he has done so.

Second, even for those with a “death by cop” suicide wish, they normally try to carry out their acts of mayhem before taking that final bullet. Perhaps if they knew they would not be remembered as an infamous mass murderer (because they would be killed first) they would think again about launching their attack.

Schumaker points to “an analysis published by the RAND Center of Quality Policing” which found that “the average hit rate for New York City Police Department officers is 30 percent when no gunfire is returned. Once police officers are under fire, accuracy falls to 18 percent.”

She also references “the case of a 2012 shooting outside the Empire State Building” where “NYPD officers injured nine bystanders with bullets or bullet fragments while taking down the shooter.”

Well then, better to get rid of the cops too. It looks like they do more harm than good. And if they’re only hitting 18 percent of their targets when under fire, where do the rest of their bullets (82 percent of them) end up? Our cities and streets would be much safer without these reckless police!

Again, I don’t claim to know what are the best solutions when it comes to stopping mass violence. And Schumaker may well have a heavy heart after the Pittsburgh massacre, grieving over the lost lives and genuinely believing that President Trump’s strategy is the wrong one.

For the moment, let’s look at this straightforwardly.

Questions Too Obvious for HuffPost

Just ask yourself these questions.

First, if a potential mass murderer was canvassing your church or synagogue, would he be more or less likely to attack if there were armed guards outside?

Second, if you had the choice of having policemen with their imperfect shooting skills guarding your neighborhood as opposed to either unarmed officers or no officers at all, which would you choose?

Did Mike Pence Ask a ‘Fake Rabbi’ to Pray for the Synagogue Victims?

Suspect Due in Court as Harrowing Synagogue Tales Emerge