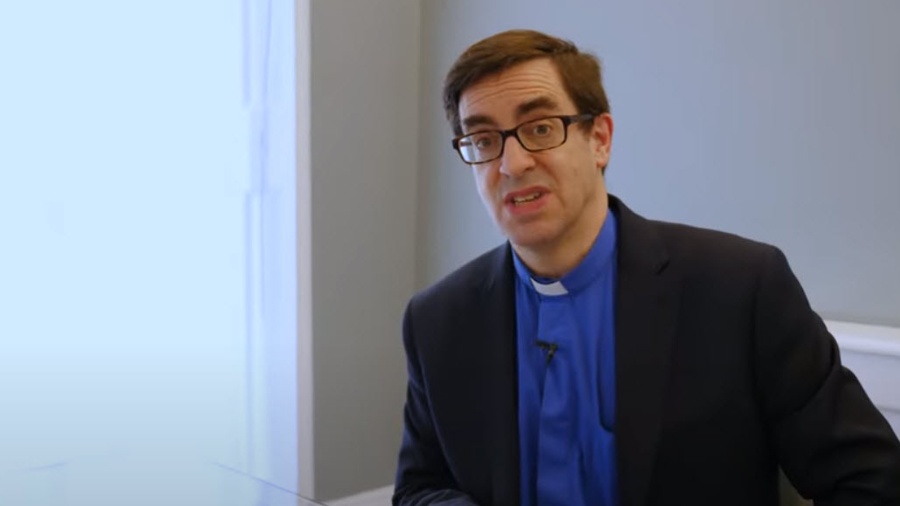 As far back as 2009, the BBC was reporting on the harassment of street preachers, devoting an entire Sunday broadcast to the subject on August 23, 2009. The program included “a recording of a recent incident where a street preacher was told by police officers that it is a criminal offence to identify homosexuality as a ‘sin.’”

Since then, quite a few street preachers have been arrested for even less direct offenses. Most recently a 71-year-old street preacher who, together with his colleague, explained God’s plan for male and female marriage as found in Genesis. For this he was roughly handcuffed and arrested.

But it’s one thing to be arrested for allegedly offending people while preaching on the streets, as horrific and shocking as that is. It’s another thing to be fired from your job and reported to the government as a religious extremist and potential terrorist for preaching a graciously worded sermon on sexuality in an allegedly Christian school.

Rev. Bernard Randall: Fired and Reported as a Potential Terrorist

But that’s exactly what happened to Rev. Bernard Randall, who formerly served as a chaplain at Cambridge but was fired from his more recent job at Trent College (with students aged 11-17).

Now, as reported by Christian Concern, a major legal organization in the U.K., Randall “has launched legal action after being reported to the government’s terrorist watchdog and losing his job for delivering a sermon in a school chapel that encouraged respect and debate on ‘identity ideologies.’” And he preached this sermon in a chapel service for a school that claims to have a “protestant and evangelical” Church of England ethos.

Prior to his sermon, which was preached in response to questions from the students about LGBTQ issues, the school had brought in Elly Barnes, who leads “Educate and Celebrate.” Their mission statement reads, “We equip you and your communities with the knowledge, skills and confidence to embed gender, gender identity and sexual orientation into the fabric of your organisation.”

When it comes to our freedoms, “use it or lose it” has never been more true.

But not all the students were happy with this, with one asking Randall if, in one of his sermons, he would address the question, “How come we are told we have to accept all this LGBT stuff in a Christian school?”

Feeling that this was important, he tackled the controversy, but with grace, with tolerance, with encouragement to have civil discussion and debate, and, in all cases, to practice love of one’s neighbor.

Yes, that sounds like a terrorist to me. Watch out for religious extremists like him! Government, beware!

But it gets worse still. Seriously.

To quote Christian Concern directly, “Disclosed emails reveal that after this meeting, the DSL [Designated Safeguarding Lead] began the process of reporting Dr. Randall, without his knowledge, to the government’s counter-terrorism watchdog, Prevent, as a potentially violent religious extremist.

“The DSL also reported him to the Local Authority Designated Officer (LADO) as a danger to children, which is the same point of contact for reporting concerns over paedophilia.”

I am not making this up. Really, who would make up something so utterly ridiculous and obscene?

As for the government’s response, “a Derbyshire police officer, Richard Barker, responded to the report to Prevent saying that the sermon posed no counter-terrorism risk. However, documents reveal that according to the DSL, he gave his personal opinion that the sermon ‘was wholly inappropriate for a school, and society in general.’”

This is as sickening as it is dangerous, especially when you hear Rev. Randall quote some excerpts from the sermon himself. Watch the video here:

'I never thought a sermon would lead to me being reported as a terrorist'.

Dr Bernard Randall, an ordained @churchofengland minister, speaks about his experiences of being reported as a terrorist for a sermon encouraging pupils to love their neighbour. https://t.co/sSjqhEWxF1 pic.twitter.com/K8JNJ26EgV

In the words of Andrea Williams, chief executive of the Christian Legal Centre, “When an ordained Church of England minister can’t give a simple sermon in a Church of England school without being reported as an extremist and hounded out of his job then who is safe?”

Who, is safe, indeed? Certainly not Päivi Räsänen in Finland, where she serves as a Member of Parliament and was formerly Minister of the Interior.

She is facing 6 years in jail (yes, 6) “for allegedly committing three crimes, including ‘hate speech,’ for sharing her opinion on marriage and human sexuality on social media, on television and in a pamphlet.”

The politician, who is a member of the Evangelical Lutheran Church of Finland and former chair of the Christian Democrats, has been under police investigation since June 2019 for publicly voicing her opinion on marriage and human sexuality in a 2004 pamphlet, for comments made on a 2018 TV show, and a tweet directed at her church leadership.

A medical doctor, mother of five and grandmother of six, Räsänen now faces two years in prison for each alleged crime, the group said.

So, for publicly questioning her church’s teaching on the Bible and sexuality via TV and Twitter, she is potentially facing 6 years behind bars. (Did I already say that I’m not making any of this up?)

In response Räsänen said fearlessly, “I will defend my right to confess my faith, so that no one else would be deprived of their right to freedom of religion and speech. I hold on to the view that my expressions are legal and they should not be censored. I will not back down from my views. I will not be intimidated into hiding my faith. The more Christians keep silent on controversial themes, the narrower the space for freedom of speech gets.”

Yes, read that last sentence again, and take it to heart. She is absolutely right. When it comes to our freedoms, “use it or lose it” has never been more true.

Church of America, are you getting the message, finally? Be assured that the clock that counts down our freedoms is ticking, loudly, clearly, and quickly. What will you do?