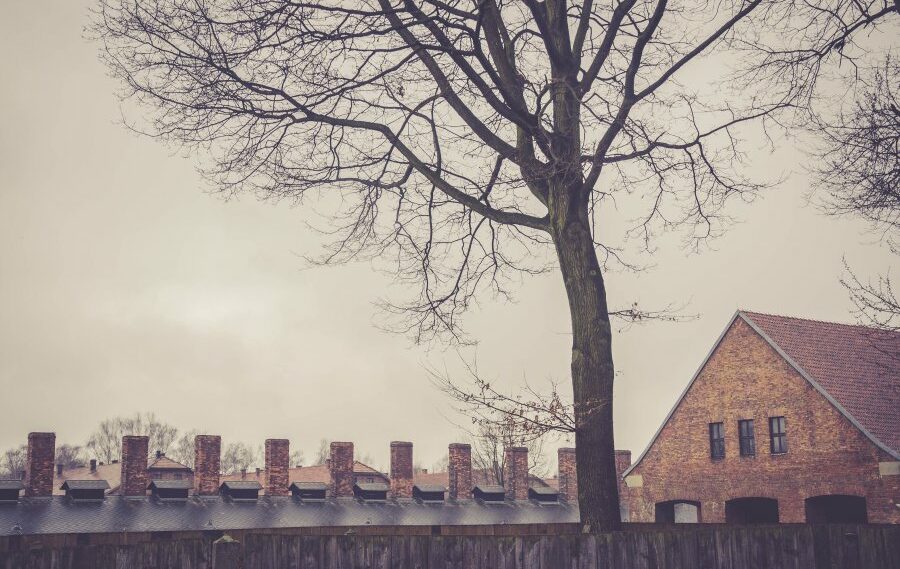 The original brick barracks and chimneys of gas chambers at the Auschwitz/Birkenau death camp.

The man on the television sat in what must have been his very nice apartment in New York City. He looked to be in his 40s, maybe a little older. He was wearing a turtleneck and a jacket, in the style of the 1970s. As he was talking, he slowly began to cry.

He’d survived the Holocaust, come to America, and done well. He was being filmed about thirty years later. One of the reasons for our observing Holocaust Remembrance Day, is that for our Jewish brethren those events remain a living reality.

The murder of millions and millions of Jews leaves them with an inescapably formative part of their history. What happened to your grandparents or great-grandparents shapes you. And they know the mind and spirit that did that to their ancestors remains an inescapable part of the present, because some people still hate Jews and wish them ill.

A World in Which Men Will Kill You

I wrote about the man a few years ago. I was standing in a bay at the Museum of Jewish Heritage at the lower end of Manhattan, watching interviews with survivors of the Holocaust. One woman described getting off the train in Auschwitz as a little girl, and soldiers dragging her away from her father and brother. She would never see them again because they were being dragged off to die.

Some Europeans fought the Nazis taking Jews away to be killed. The young Dutch Christian Diet Eman, for example. Read her story in She Said No to the Nazis, and Paid the Price.

This man affected me most. He began speaking confidently, sharing his memories in the way you’d talk about a rough time way back in first grade. He’d obviously done very well in America. Then his voice started to crack, a little, and I expected him to keep control the way men do rather than cry in public. He broke down very quickly.

He sat in front of the camera sobbing. I had to walk away. I can’t imagine what it’s like to go on living, to build a new life, after having suffered what he had suffered. To have been living a normal life that turns so quickly into horror. To know from your own horrific experience that the world is such a place in which men will kill you and your people gladly, happily, cheerfully.

Just because you’re one of a people they hate. No other reason. Just a cold and weirdly impersonal hatred. You’re just a thing to be disposed of.

That stays with you.

Two writers from the Family Research Council describe on The Stream today the anti-semitism — some of it, because there’s more — that still poisons our world.

Anti-semitism poisons right and left. Almost any right-wing group eventually starts blaming the Jews. The more resentful it is, and the more obsessed with conspiracies, the faster it gets to anti-semitism. The same thing happens on the left. You don’t like the way the world works? You’re feeling left behind? Blame the Jews.

As Christians, we should observe days like Holocaust Remembrance Day. (It’s observed on January 27th, the day Auschwitz was liberated.) It was the most horrific even in the history of those who are “our elder brothers” in the faith of Abraham, as John Paul II put it. Spend time praying for the victims. Pray for their descendents, who bear the trauma still. Pray for those who continue to hate Jews and spread the poison, including Christians, that they will repent. If not repent, at least stop.

Just as importantly, learn in the story in the way you feel it. The best way to do this is to read about the Holocaust. Not so much general histories, though they’re helpful, but memoirs and biographies that show us what real people experienced. Their experiences are literally unimaginable. We can’t imagine them. But we can get some small understanding — and therefore some degree of sympathy — by reading the stories of those who went through it.

In middle school, many of us read either The Diary of Anne Frank or Elie Wiesel’s Night. There are many other good ones. Here are just three of the dozens: Jona Obserski’s Childhood, the story of a boy who at five was taken with his family to Auschwitz; Primo Levi’s Survival in Auschwitz, about his time in Auschwitz after his arrest both for being Jewish and for fighting Italy’s fascist government; and Janina Bauman’s Winter in the Morning, which tells the story of her life in the Warsaw ghetto, her escape, and living in hiding till the war was over.

In I Want You to Know We’re Still Here, Esther Safran Foer describes her life growing up as the child of two survivors. The classic Man’s Search for Meaning by the psychiatrist Victor E. Frankl tells his own story and reflects deeply it.

There are, as I say, many, many more books to be read. Here the search engine is your friend.

The first way to do that is not to go looking for Jewish people to befriend. No one wants someone arriving at the door saying “Hi, I’m a Christian! You’re a Jew! Let’s be friends! Jews rock!” I’d close the door and stay inside for a week till I was sure you’d gone away.

Christian friendship is not unproblematic for Jewish people. Our ancestors have Jewish blood on their hands and some of our contemporaries oppose Jews and Judaism in their own ways. Some of those anti-semitic right-wingers and left-wingers claim to be Christians. The Jewish community is one that rightly looks at us with reserve and caution. They tend to feel that way even about friendly Christians, because Christians can adopt them as tokens or prizes (“Hey, look, I’m friends with a Jewish guy!”) or only feel interested for a while, till some other cause comes along.

The first way to grow in friendship is to commit yourself to regularly learning about Jewish history and belief and Jewish life today. If you want to be friends with someone, you take some time and effort to learn about him and his world. It interests you because it’s his.

The easiest way is to follow a variety of Jewish sites and read at least one substantial article every day. I follow Mosaic (politically and culturally conservative), Tablet (mixed), and Forward (liberal). And Chabad (not so political), who are in some ways Judaism’s Evangelicals in their seriousness about their faith and their desire to make it known. I also subscribe to the Jewish Review of Books (like Mosaic, politically and culturally conservative).

You will want to support Jewish causes as you can. Oppose anti-semitic groups and thinking. Challenge anti-Jewish prejudice in your circles. It comes up, often in someone throwing out a stereotype, just Jews being greedy, and not even realizing they’ve said something wrong.

Keeping up on Jewish concerns helps a lot, but most helpful to me is reading and wrestling with the articles on biblical and theological subjects. You have to wrestle with a similar but different way of seeing the world, one offering a great deal of wisdom through an intellectual rigor the strictest Calvinist or Thomist would appreciate. Knowing something about Judaism will illuminate Christianity and deepen your understanding of your own faith. As well as impress upon you the wisdom and insight and spiritual seriousness of our Jewish friends and their tradition.

And then, if you don’t know any Jewish people, and a lot of American Christians don’t, call the nearest synagogue. A few will have Jewish-Christian groups, but not many. Some will have Bible studies and other study groups they might invite you to join. If you do, remember that the friendship can be tricky and must be carefully negotiated. If they don’t have anything for you to join, continue to pray, to study, to read. Your prayers will do good and you will grow from the encounter with your elder brothers.

David Mills is a senior editor of The Stream. After teaching writing in a seminary, he has been editor of Touchstone and the executive editor of First Things. He writes the monthly “Last Things” column for the New Oxford Review and a “Chapter House” column for The Catholic Herald.