Would we have done the same thing? Only if we practice now 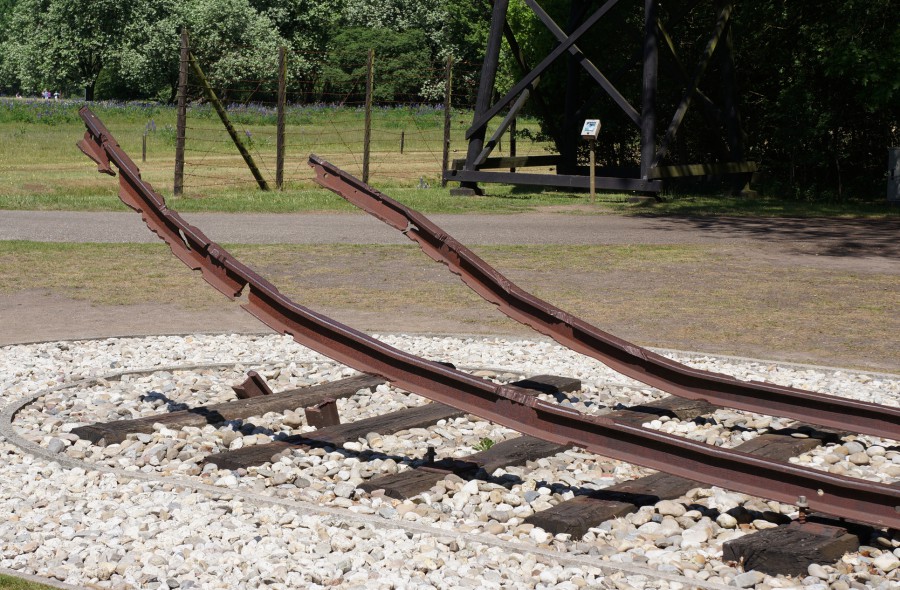 Tracks at the Westerbork transit camp in the Netherlands. It was one of the camps from which the Germans shipped the Jews they captured to the extermination camps in the east.

She died just a few weeks ago, at the age of 99, in Grand Rapids, Michigan. Diet Eman was a hero you probably never heard of. I hadn’t. When the Germans invaded the Netherlands in May 1940, the 20-year-old woman rallied her friends and family to resist. Her fiancé, Hein Sietsma, helped lead the group. They were all Christians.

And following Christ cost them. They lived in constant fear and gave up the pleasant life they could have had. The Nazis killed some of them. They brutalized some of them in prison. Diet lost almost everything but her life.

I saw her story on the Accidental Talmudist website. The site runs a weekly series paying tribute to heroes of the Holocaust, many of them gentiles and Christians. At first, resisting mainly meant listening to broadcasts from England and sharing the news with others. Not much, you think, but you could be sent to a Nazi jail just for listening to a foreign radio station.

Soon after that the Germans started making laws to hurt Dutch Jews. They banned them from trains and buses and whole sections of cities. They took away their jobs and property. Jews had to wear a yellow star. That made them targets for every brute and Jew-hater. Hein had read Hitler’s Mein Kampf, a book whose hatred of Jews and others leaps off the page. He knew what the Nazis wanted.

Diet Eman’s work is the subject of a documentary called The Reckoning. You can watch it on Amazon Prime. She wrote her story in a book called Things We Couldn’t Say. In 1994, Israel’s Yad Vashem Holocaust museum honored her as one of the “righteous among the nations.” Her fiance Hein Sietsma had been honored in 1977.

As things got worse, Diet, Hein and their friends did more. People needed help, so they helped them. First, Diet hid a terrified Jewish friend and his family. He had gotten a notice to report to the Germans and bring one suitcase. That meant a trip to a concentration camp. A farmer hid them. If caught, he would have lost his farm and probably his life. Another hero, but we don’t know his name.

Once they started hiding people from the Nazis, Diet and Hein kept it up. Over the next two years, they found places for 60 more Jews to hide. They helped many others already in hiding. They got them fake IDs and ration cards so they could eat. Diet even organized burglaries to get the ration cards from government offices. They did this while they were themselves hiding from the Gestapo, the brutal Nazi secret police.

They Would Have Executed Her

In April 1944, the Germans arrested Hein. Diet found out only after the war that he had died at the prison camp in Dachau. A month later, six Gestapo officers caught her on a train. She carried under her clothes fake documents to give people she was hiding. When the soldiers found the documents, and they would, they would take her off the train and execute her.

The Accidental Talmudist tells the story: “There was no chance to get rid of the documents, until a stroke of luck she later attributed to divine intervention. One of the officers had a new plastic raincoat, a brand-new invention, and the others were so fascinated by the coat that Diet was able to toss the documents into a nearby trash can without being noticed.”

The Germans sent her to a concentration camp. They put her to work cleaning bloodstains off the clothes of those they had just killed. She broke down. She had done enough, you might think. But when the camp let her go after three months, she went back to work helping Jews and others in danger.

She later got her fiancé’s final letter. He wrote it on tissue paper and threw it out of the train on the way to the camp. “Darling, don’t count on our seeing each other again soon,” he wrote. “Even if we won’t see each other on earth again, we will never be sorry for what we did, and that we took this stand.” He ended his note, “Omnia vincit amor,” love conquers all.

Diet moved to Venezuela and then America after the war and had a family here. She reportedly didn’t speak of her experiences until 1978. The memories were too painful.

An inspiring story. It dramatizes our Lord’s instruction to us: “Go you and do likewise.” Eman thinks we’ll do that. “You think it’s something special,” she said when receiving an award. But “you would have done the same there, when you had friends who were Jewish and they were in danger.”

Would we? We all think we would. We see ourselves at Diet’s side. I’m not so sure. We don’t face Nazis, but we get chances to stand up for men and women who are oppressed and hurting. And how often do we do that? That’s the test.

You want to fight Nazis? Fight the brutes you know. Be faithful in little. Take baby steps if you want to write like a grownup. It may just be the odd guy at work people push around or make fun of, but he needs someone to help him. Or the family left out when your church’s “cool kids” gather. The guy getting harassed by a traffic cop or bullied by the clerks at the DMV. Someone being mobbed by people spitting insults on Facebook. The opioid addict people treat like trash.

That’s the test. Someone always needs our help. We get chances to stand up for someone. And sometimes helping them can hurt us, but the Lord expects us to help them anyway. If we don’t do it for them, we wouldn’t have done it in the Netherlands in the early 1940s. You don’t stand up to the bully in your office, you wouldn’t have stood up to the Gestapo agent.

Diet Eman noted something about the fruits of obedience, which I found helpful. It’s easier to do what you should once you’ve started doing what you should. You usually have to keep being obedient even when you’d like to stop. “In the beginning,” she said, “you have no idea what risk you are taking. Then, you’re so deep in it, you can’t go back.” Because love, when it’s God’s love, conquers all.