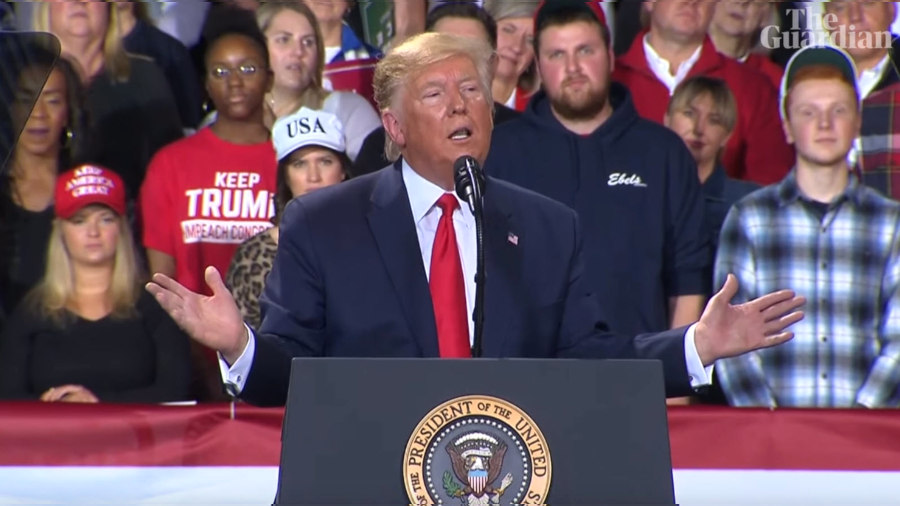 Do you recall the words of candidate Donald Trump, specifically, that he could shoot someone on Fifth Avenue and he wouldn’t lose voters? Well, if you are a Christian supporter of Trump, as I am, you now have your “Fifth Avenue” moment. How will you respond?

Before I explain what I’m talking about, let me make my own viewpoints clear.

After strongly opposing Trump in the primaries, I voted for him in 2016. I support him as my president. If the elections in 2020 were between Trump and one of the current Democratic candidates, he’d get my vote.

I also believe that the Democrats have been intent on impeaching Trump since he was inaugurated. (Really, since he was elected.) And I do not believe he has committed impeachable offenses.

So, I am not a Trump basher in any sense of the word. And while I will appeal to the president in this article, my focus is on my fellow-believers. In particular, those who claim to be Bible-believing Christians.

And that brings me to the “Fifth Avenue” moment of which I speak.

In his large rally in Michigan the night of the impeachment, President Trump related how he honored the late Democratic Rep. John Dingell, from Michigan. When Dingell died earlier this year, Trump ordered federal flags to be hung at half-mast. Trump then said that his widow, Debbie Dingell, now a Michigan Democratic Representative herself, called him. “That’s the nicest thing that ever happened,” she said. “Thank you so much. John would be so thrilled. He’s looking down. He’d be so thrilled.”

Then Trump spoke these words, which have created an instant firestorm and even deflected some of the attention from the impeachment: “Maybe he’s looking up,” Trump said. “I don’t know. … But let’s assume he’s looking down.”

He cracks a joke at the expense of Dingell’s widow, who is about to experience her first Christmas without her husband since their marriage in 1981?

What? The President of the United States suggests that a man might be in hell? He cracks a joke at the expense of Dingell’s widow? A woman who is about to experience her first Christmas without her husband since their marriage in 1981? He disparages a World War II veteran who served his country for years?

My appeal to the president, is simple. “Please, sir, acknowledge how wrong this was and issue a public apology, without qualification. That, Mr. President, would be in keeping with the dignity of your office.”

My issue, however, is not so much with Mr. Trump. It is with Christians who found his comments funny. Who laughed at them and saw nothing wrong. Who may have even said, “Yeah, who knows? Maybe the man is in hell!”

This is the proof that you have drunk the Trump-can-do-no-wrong Kool-Aid. (Just as many on the left are suffering from Trump Derangement Syndrome.) That your allegiance to Trump here is greater than your allegiance to the Savior. That you are in the flesh, not the Spirit.

You might say to me, “Get off your self-righteous horse! This is a battle for the soul of our nation. And this whole impeachment process is of the devil. This is when we need to stand with the president, not get into legalistic nitpicking. Throw stones at the Democrats, not the president.”

But that’s the whole point. I want to stand with the president. To defend him against his attackers. To expose the wrongness of the impeachment process.

But when he says things like this, integrity requires that I speak out.

Of course, if I had direct access to the president, I would reach out to him personally. But I don’t — I’ve never met him or been in the same room with him. But to repeat, my issue here is not so much with the president’s words. As much as they disappoint me, they do not surprise me. My issue here is how we reacted to those words.

A Person’s Eternal Fate is Not a Laughing Matter

To me, this is where we make our priorities known. Not to appease the Trump-haters, which will never happen, but to honor the Lord.

Some things are not funny. And a person’s eternal fate is one of them. Would Trump have said that John Dingell might be damned had his widow voted against impeachment? (For the record, only God knows where Mr. Dingell is right now and where will be forever. I recommend that none of us play God and presume to know. We also don’t know if the deceased are aware of everything that is happening here on earth.)

Can you imagine if the shoe were on the other foot? If Hillary Clinton had made a similar comment?

How would you, as a Bible-believing Christian react? Would you be outraged? Mortified? Would this be proof to you of Hillary’s depravity? You might well say, “She is not just crooked. She is downright evil!”

Then how is it funny when President Trump makes this very comment?

Let me say it again. My intent is not to hit the president when he is down. I am not on the side of those who impeached him. In fact, it might well turn out that his impeachment will help him win a massive victory in 2020. So be it.

But to my fellow-Christians I make this earnest appeal. Search your hearts. Ask yourself if you have, on any level, sold your soul in allegiance to Trump.

Without a doubt, he has exposed the hatred of the left-wing media and the radicality of the Democratic Party. And he has exposed just how deep the swamp is in D.C.

But he has also exposed carnality in the Church. We dare not lose our Christian sensitivities out of allegiance to the president. He is not our Savior, as I have written before. He is not Jesus. (That’s why I won’t compare his impeachment with the crucifixion.)

So, I will stand with President Trump as he stands for what is right. I will cheer him on as he fights courageously for good causes. And I will applaud his backbone of steel as he refuses to wither under unrelenting attack.

But I will not laugh when he insults the dead or mocks a widow. Neither should you, if Jesus is your Lord.

Plenty of other voices will be bashing the impeachment process. Calling out the Democrats. My voice is not needed to add to that chorus. But it is needed when believers lose their conscience in the midst of today’s political madness.

So, revile me if you like. It is the Lord I seek to please, not people.