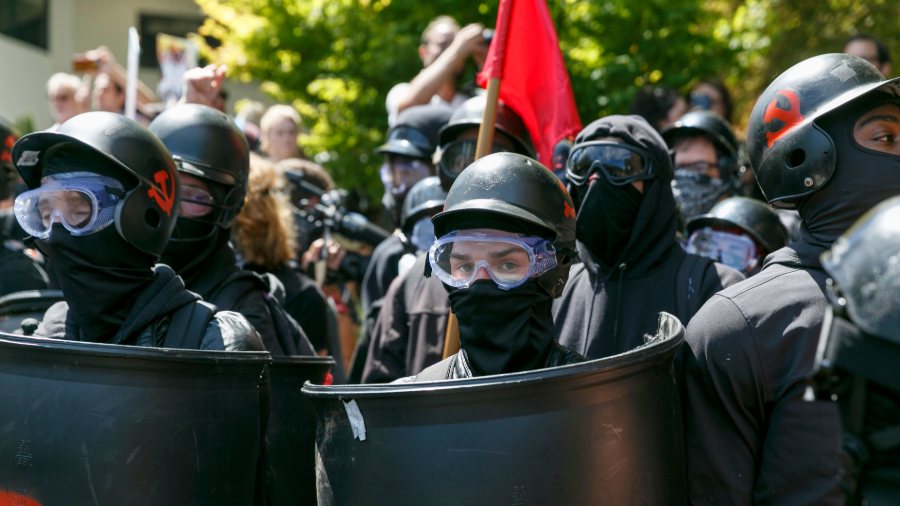 Counter-protesters prepare to clash with Patriot Prayer protesters during a rally in Portland, Ore., Saturday, Aug. 4, 2018.

Why is it that organizations like the SPLC can designate conservative Christians as hate groups while ignoring radical leftists like Antifa? Why is that Facebook and Google and YouTube and Twitter appear to punish conservatives disproportionately for alleged violations of community guidelines?

The answer is as disturbing as it is simple. The left believes it is so morally and intellectually superior to the right that it can see nothing wrong with its extreme positions and hostile words. Is it wrong to be intolerant of bigots? Is it wrong to hate (or even punch) a Nazi?

Of course, there are double standards on all sides of the debate. On the right as well as on the left. There is more than enough hypocrisy to go around, from the most progressive to the most conservative.

All of us have our share of blind spots, so we tend to condemn in others what we justify in ourselves. Welcome to human nature.

Still, it is conspicuous that the same behavior gets treated differently by the leftist elite (including many a university professor) and by watchdog groups like the SPLC and by the internet giants.

Back in 2004-05, when I first began to address gay activism, I was widely mocked for saying, “Those who came out of the closet want to put us in the closet.” The response was consistent: “No one wants to put you in the closet!”

A few years back, I noticed a change in tone: “Bigots like you belong in the closet!” But of course!

What I’m talking about here has to do with fundamental attitudes, with the basis of our judgments, with the inability to see wrong on one’s own side.

While being interviewed on a Christian TV program back in 2011, I quoted the comment of a Christian attorney. He told me that those who were once put in jail (speaking of pioneer gay activists) will want to put us in jail. For having the audacity to say this on Christian TV, I was vilified and maligned.

Yet when Kim Davis was jailed in 2015 for refusing a court order to grant same-sex marriage licenses, there was widespread rejoicing on the left: “Kim Davis is ISIS! Lock her up!”

Again, I’m aware of double standards on all sides. It’s a point of personal reflection and self-examination in my own life.

For example, I believed that, in 2004, San Francisco mayor Gavin Newsome should have been disciplined for issuing same-sex marriage licenses in violation of the law. Yet I believe that Kim Davis was within her rights in refusing to issue such licenses and her home state of Kentucky failed to protect her, under the law.

These are debates we can (and should) have.

In my May 2016 article called “Is Facebook’s Mark Zuckerberg a Well-Intended Liberal with a Massive Blind Spot?,” I referenced the kidnapping of Adolf Eichmann, the notorious Nazi mass murderer, who was apprehended by two Israeli agents while living quietly with his family in Argentina.

They had to wait for several weeks before smuggling him out of the country. During that time, they spent many hours in private conversation with him, somehow managing to restrain themselves from taking the law into their own hands.

In one of the conversations, one of the agents realized that Eichmann had given the order to exterminate the village in which his wife’s family lived, killing every single one of them.

When asked how he could do such a thing, Eichmann seemed perturbed, responding, “But they were Jews.”

Of course he gave the order to kill them. What else was he to do?

Again, to be clear, I am not comparing the SPLC or Facebook or Google to Eichmann and the Nazis. That would be as bad as leftists comparing conservatives to Nazis. Not a chance.

I’m simply pointing out that in Eichmann’s twisted world, he was only following orders and doing what was “right.”

Let the Hypocrisy be Exposed

So also, in Antifa’s twisted world (although, again, I emphasize, not as twisted as that of the Nazis), they are doing what is “right” in violently opposing the tyrannical right. Somebody’s got to do it!

Thankfully, there is an ongoing, healthy push-back against this liberal hypocrisy. In fact, just this week, Attorney General Jeff Sessions called out the SPLC for using hate group labels to “bully” conservatives. Let their hypocrisy be exposed.

But remember: You have been prejudged as guilty, so your mistreatment is well-deserved.

It is this highly bigoted attitude we must overcome with truth, reason, determination and love.