The Real Issue Between Israel and the Palestinians

It is no stretch to say that we are in a position where Hamas — an organization dedicated to the annihilation of the Jewish people — is being more honest than the western media. 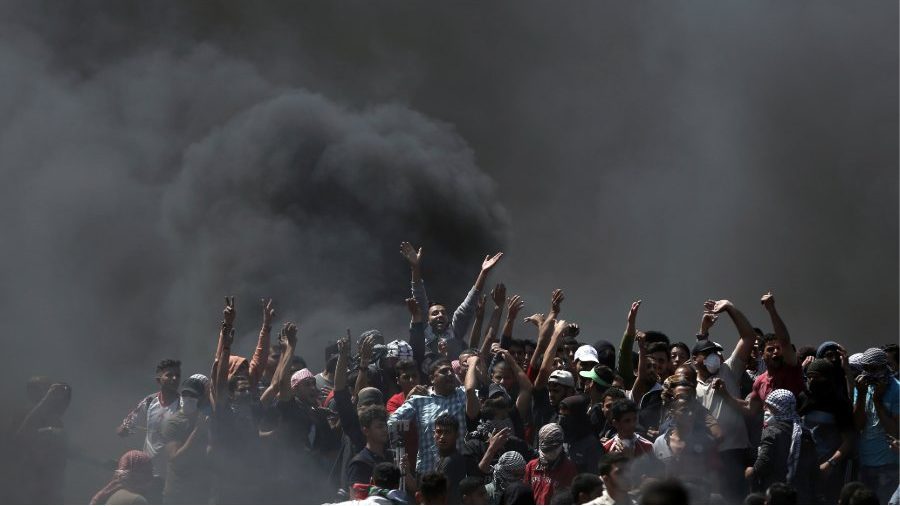 FILE- In this Monday, May 14, 2018 file photo, Palestinian protesters chant slogans as they burn tires during a protest on the Gaza Strip's border with Israel.

Yet again, a new spat of headlines from the Middle East have hit our feeds. And yet again, we are told, essentially, “It’s all Israel’s fault.”

Israel is not a perfect country. Jews themselves don’t even think it is. There’s a famous joke about Jews that says “Two Jews, three opinions.” You’ll find a lively range of opinion among Jews both in, and outside of Israel.

Hamas, unfortunately, is not so divided. Its founding Charter called for the elimination of all Jews — not just in Israel, but throughout the world. Its “coat of arms” shows the Dome of the Rock on the Temple Mount, with the entire land of Israel/Palestine on top in Islamic green, with two swords on the bottom. This organization has never been about peace, never been about coexistence, and never been about progress. Its entire reason for being is the destruction of Israel, and the murder of Jews. On this they are united.

And it was Hamas Israel just did battle with recently.

The same Hamas who throws homosexuals off of rooftops, inspiring the inimitable Douglas Murray to observe “If you were part of ‘Gays for Palestine’ in Palestine you’d have to be in Israel!”

The same Hamas who hires people to go on suicide missions by offering their families money.

The same Hamas that fires missiles from hospitals, and uses civilians as human shields.

The same Hamas who, after Israel offers multiple warnings for evacuations, threatens Palestinian civilians, at gunpoint, to stay where they are. Their blood being splattered across western television is more useful than their lives.

The same Hamas who, after the unilateral evacuation of all Jews from the Gaza strip, destroyed immense amounts of economic infrastructure (because it was created by Jews), and uses the hundreds of tons of aid convoyed into it by Israel on a daily basis to build weapons, dig tunnels, and repress its own people.

Thus, for those of us who actually pay attention and study this conflict, the sight of Hamas-inspired “rallies” at the border of Gaza and Israel is no surprise. We know it isn’t real. We know that in most cases, it is either the result of cash payments, or threats of violence. Is there genuine pain and anguish involved? Yes, absolutely. But most of it is created by Hamas for the sake of western media, who oftentimes refuse to tell the truth.

After Israel offers multiple warnings for evacuations, Hamas threatens Palestinian civilians, at gunpoint, to stay where they are. Their blood being splattered across western television is more useful than their lives.

For example, we were told that 62 Palestinians were killed, presumably because Israel is savage and has contempt for human life. This in turn catalyzed a cascade of virtue-signaling from politicians, celebrities, and “activists” alike, all condemning Israel. But soon after, we learned the truth (which, again, those of us who follow this conflict already knew). Of those 60 dead, 53 were terrorists. Fifty were from Hamas itself, and three were from Islamic Jihad. The other 7 could have been engaged in hostile actions, but didn’t officially belong to any terrorist groups (as far as we know). Thus, Israel was not indiscriminately firing into crowds, but taking out terrorist thugs who were attacking it. If any of them had succeeded in taking down the border fence, and thousands flooded into Israel, the outcome would have been far bloodier than it was.

It’s Not About the Embassy

The ostensible cause of this madness? Western media says “The moving of the U.S. Embassy to Jerusalem.”

This is nonsense. That was not the cause — it was merely the pretext.

What does the move of the embassy do? Absolutely nothing. Under any and all proposals over the last three decades by either Israel or the Palestinian Authority for a two-state solution, Jerusalem was always divided between the two — roughly Western Jerusalem for Israel, and East Jerusalem for the Palestinians. (This is an entirely arbitrary division, I might add; the result of the 1948 attempt by the Arabs to commit a second Holocaust by wiping out all the Jews in the Holy Land.) In any event, it was always certain that Israel would have at least West Jerusalem — and that is where the Embassy is located.

Beyond according Israel what is accorded to every other nation on earth, absolutely nothing changed.

What Relocating the Embassy Did

The relocation of the U.S. Embassy did two things: it acknowledged the reality which both Israel and the Palestinians have assumed for decades (i.e. that Israel would always have at least West Jerusalem), and affirmed the right of Israel to say where its capital is. Nothing more.

But, as with so much else, the Jewish State was held to a different standard — one that apparently makes Hamas’ violent, and genocide-inspired actions at its border understandable. And yet what could Hamas possibly be protesting — the obvious? The reality? The same understanding that their fellow Palestinians have always claimed (at least publicly) to have?

Nearly 90 percent of the people killed by Israel in the recent “protests” were terrorists — men committed not to bloodying Israel’s nose, but smiting Israel’s neck.

And that denial of a right simply to be is the foundation of Hamas. That’s why nearly 90 percent of the people killed by Israel in the recent “protests” were terrorists — men committed not to bloodying Israel’s nose, but smiting Israel’s neck.

What made the entire sordid affair even worse is that Hamas openly acknowledged its aims. It openly acknowledged that this was not a peaceful protest, but an act of violence. The leader of Hamas explicitly said “So when we talk about ‘peaceful resistance,’ we are deceiving the public,” and said that Palestinians should not even be talking with Israel. Hamas also recently acknowledged, on Lebanese TV, that it was in almost daily contact with Hezbollah and Iran, both of which have, likewise, affirmed their desire to destroy Israel.

And that is the core of the conflict: one side accepts the right of the other to exist. The other, doesn’t.

Thus, it is no stretch to say that we are in a position where Hamas — an organization dedicated to the annihilation of the Jewish people — is being more honest than the western media.

Remember that the next time you read headlines from Gaza.