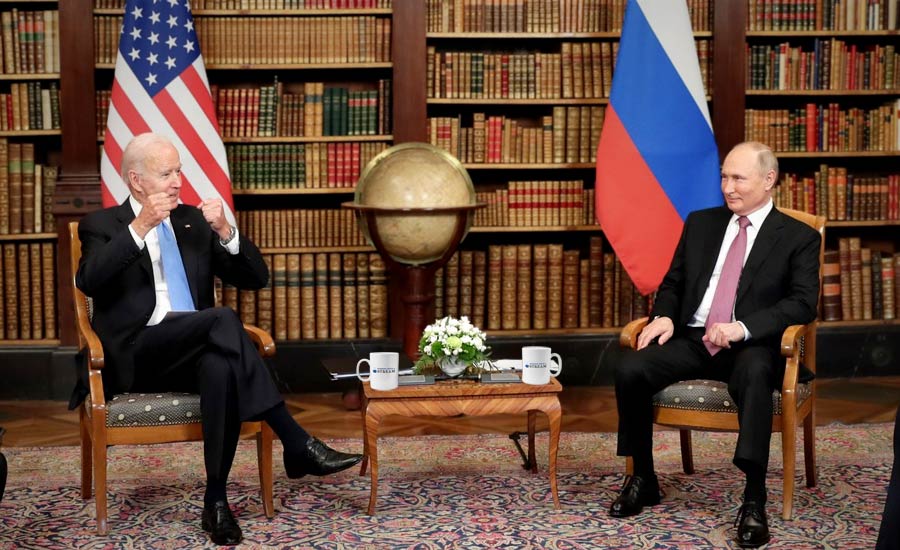 Vladimir Putin should thank you, Biden voters. You’ve given America to a failing, flailing totalitarian state that’s only good at one thing: Targeting for destruction its political enemies.

Maybe that’s not what you intended. Perhaps you will confess to your children and grandchildren, as they scrape for stale bread from their elite masters, that a tragic symptom of your Trump Derangement Syndrome was political psychosis. Because only psychosis can explain the refusal to see that the same gang that used the DOJ, CIA, FBI, State Department, Defense Department and IRS in a black op against Donald Trump would turn that massive power of the state against average citizens, when it suited them.

We’ve been reporting on this awhile, but now conclusive proof has emerged. The National School Board Association didn’t just come up with the idea to label average parents concerned about Marxist, racist hate “domestic terrorists.” A memo uncovered by Parents Defending Freedom proves that the NSBA actively coordinated with the White House on the letter. As Mark Levin’s America First Legal Foundation already uncovered, the Biden regime didn’t like average citizens speaking out in a growing movement that could cause problems for the 2022 election. So they plotted with the NSBA on their now infamous letter, and used that letter to — in less than a week — order the FBI to go after the parents.

“Oh, but the White House wouldn’t have the FBI go after someone just because they could hurt Biden politically.” Really? Ask James O’Keefe of Project Veritas.

When you’re a totalitarian regime, you use the force of government to protect your own. Last week, the FBI raided Project Veritas and journalists associated with the investigative group. Why? To get at Project Veritas over its connection to the Ashley Biden Diary. A diary Project Veritas did not publish! And had long since handed over to the Feds.

What does the FBI have to do with the alleged theft of a personal diary? Anything it wants to, baby. They’re untouchable. They work for the Man.

The FBI went further. Biden’s FBI leaked privileged information from O’Keefe’s phone nabbed in the raid to the New York Times, which is currently being sued by O’Keefe over defamation. A judge has ordered the FBI to stop extracting data from the phone.

But we know what the regime thinks of court orders. Just last week, the White House told businesses to ignore the Fifth Circuit’s temporary halt on Bidens’ vaccine mandate.

Not like anyone at the FBI has to worry about being punished for leaking against a political opponent. After all, the deputy director of the FBI can leak information to the press to counter claims by agents that he blocked the investigation into the Clinton Foundation. (After his wife got $700K with the help of Terry McAuliffe, whom the regime is now looking to hire.) Andrew McCabe not only leaked the story, he lied to the FBI about leaking the story, and framed underlings in the process. McCabe’s office is also where the “insurance policy” to be used against Trump was hatched.

Nah, you can raid a journalist who exposes the crimes of the regime’s friends, and who had access to a diary further confirming the president’s creepy behavior toward children, and not have to sweat being held to account.

You can take part in a criminal conspiracy to sabotage an opposition candidate, then president, and walk.

You cannot, however, take part in a rally in support of that president.

Which gets to the criminal persecution of Steve Bannon.

The corrupt House January 6 Inquisition wanted former White House advisor Steve Bannon interrogated. Why? On the surface, it’s because Bannon knows the 2020 election was stolen from Trump and he’s been unabashed about saying it. Anyone associated with Trump or the rallies on his behalf in January of 2021 is being dragged before Pelosi’s Soviet-style “committee.”

Bannon refused to take part in their production. The House held him in Contempt of Congress. That is not unusual. What is nearly unprecedented is the Biden DOJ race to charge Bannon — even as the whole matter of testifying is being litigated. Just as the DOJ raced to send the FBI after parents.

For two years, this same DOJ has sat on the Hunter Biden laptop which contains proof of how Joe Biden was in business with the Communist Chinese, to say nothing of the proof of Hunter’s criminal behavior with minors. Yet they rush to charge Bannon with Contempt of Congress and failing to turn over documents.

Nobody has been charged with Contempt of Congress in 40 years.

Not even former Obama Attorney General and “wing man” Eric Holder. All he did was ignore congressional subpoenas and refuse to hand over documents after selling a huge stash of weapons to Mexican drug gangs. Remember the Fast and Furious Scandal? Hundreds of people were murdered on both sides of the border with weapons traced to Fast and Furious.

The only person murdered on January 6 was an unarmed Air Force veteran, at the hands of one of Pelosi’s armed guards. The same Pelosi who’s now running the January 6 inquisition.

You know who else was not charged with Contempt of Congress by the DOJ, despite a referral from Congress? Obama’s IRS stooge Lois Lerner. She carried out Obama’s IRS assault on the TEA Party movement in the run-up to the 2012 Election. Lerner was ordered before Congress and refused to answer any questions about the Obama Administration’s brazen assault on American citizens.

The TEA Party movement had to be stopped before it could impact the upcoming elections. So the IRS was deployed.

The grass roots parents movement had to be stopped before it could impact the upcoming elections. So the FBI was deployed.

And Bannon? Bannon has to be stopped because his War Room podcast has a massive audience that makes CNN weep and the White House worry.

Bannon’s not being indicted by the Biden DOJ for failing to cooperate with Congress. He’s being indicted because his War Room Army is growing more powerful by the day. Just like the Mama Bear army taking on school boards. Just like Project Veritas exposing the frauds and felons and pedophiles of the regime.

All are threats to the regime. All being targeted by the full force of the U.S. government. No totalitarian regime ever had it so good.

These conspirators against America were not punished. They were rewarded with power by a corrupted election system and willing voters who could see only orange.