Pushing Back Against the PC Madness 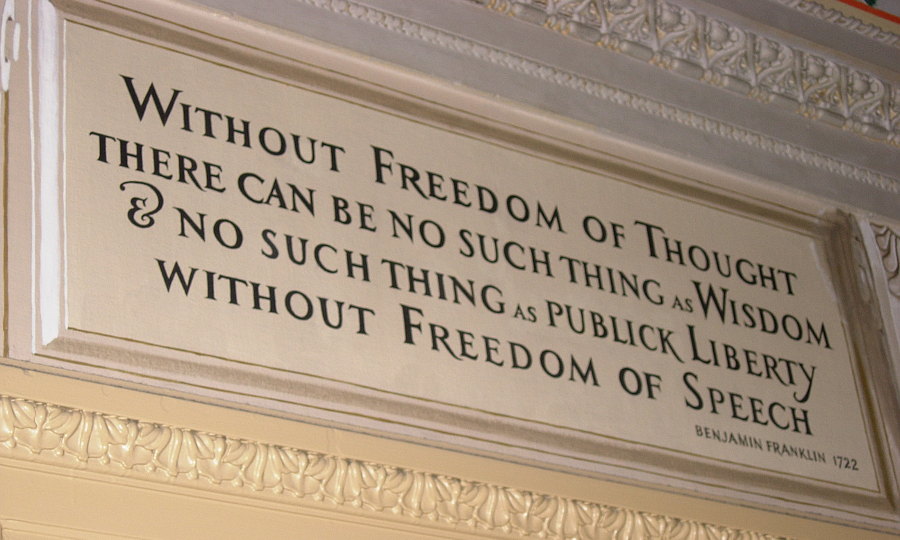 This quote by Benjamin Franklin is inscribed in the Great Experiment Hall in the U.S. Capitol in Washington D.C.

Things are getting so crazy these days that it’s not just religious conservatives who are pushing back against the PC madness. Even Hollywood liberals are speaking out.

But first, the latest example of PC insanity.

At the prestigious Duke University campus, where in-state tuition is close to $50,000, “The Duke Men’s Project, launched this month and hosted by the campus Women’s Center, offers a nine-week program for ‘male-identified’ students that discusses male privilege, patriarchy, ‘the language of dominance,’ rape culture, pornography, machismo and other topics.”

It’s those biological males who identify as males. Those are the really bad apples. Shame on them for being men!

Writing for FoxNews.com, Jillian Kay Melchior reports, “The student newspaper’s editorial board endorsed the new program yesterday, insisting it was ‘not a reeducation camp being administered by an oppressed group in the service of the feminization of American society.””

And why, pray tell, did they feel the need to defend themselves against such a ludicrous charge? Who would ever think that this wonderful new program sounded like “a reeducation camp being administered by an oppressed group in the service of the feminization of American society”?

According to Dipro Bhowmik, a junior who sits on the leadership team, “the goal of the Duke Men’s Project is for male students to ‘critique and analyze their own masculinity and toxic masculinities to create healthier ones.’”

Of course, I’m all for exposing the evils of pornography and rebuking the male abuse of women, but please. Enough with this “toxic masculinities” nonsense.

The good news is that, with the rising tide of PC madness on our campuses and beyond, more and more people are pushing back. Charlie Nash writes that “American Psycho author Bret Easton Ellis attacked ‘PC victim culture,’ microaggressions, and campus crybabies in a long monologue of his own during the latest episode of the Bret Easton Ellis podcast.”

His words are worth quoting at length.

If you cannot read Shakespeare, or Melville, or Toni Morrison because it will trigger something traumatic in you, and you’ll be harmed by the reading of the text because you are still defining yourself through your self-victimization, then you need to see a doctor. If you feel you are experiencing microaggressions because someone asks you where you are from, or ‘can you help me with my math,’ or offers a ‘god bless you’ after you sneeze, and you feel like all of this is some kind of mass societal dis, then you need to seek help. Professional help.

Nash notes that Ellis branded the “widespread epidemic of self-victimization” and “defining yourself” by “a traumatic thing that happened to you in the past” as an illness.

And, Ellis urged, this “is something you need to resolve before you re-enter society. What you are doing to yourself is harming yourself, and seriously annoying others around you. The fact that you can’t listen to a joke, view imagery, and that you categorize everything as either sexist, or racist, or homophobic, whether it is or not, and therefore harmful to you and you just can’t take it, is a kind of mania, a delusion, a psychosis that we have been coddling, encouraging people to think that life should be a smooth utopia built only for them and their fragile sensibility. In essence, staying a child forever. Living in a fairy-tale.”

Had they been the words of a conservative Christian author, as in my made-up title, they would be vilified and rejected in the strongest possible terms. After all, what conservative Christian could get away with referring to today’s self-absorbed, hyper-sensitive, microaggression madness with terms like “a kind of mania, a delusion, a psychosis”?

Nash also reports that Hollywood director Tim Burton recently “slammed political correctness in his response to criticism about the ‘lack of diversity’ in his films, claiming that he is far more offended when producers cast minority actors in their projects for the sole reason of diversity.”

The pushback is taking place on college campuses as well.

Over in Canada, “As part of an hour-long YouTube lecture on political correctness, University of Toronto professor and clinical psychologist Jordan Peterson is objecting to the Trudeau government’s Bill C-16, which proposes to outlaw harassment and discrimination based on gender identity and gender expression under the Canadian Human Rights Act and the Criminal Code.”

Peterson actually “compares the changes Bill C-16 would bring about to the policing of expression in ‘totalitarian and authoritarian political states,’” and he “argues against the existence of non-binary gender identities, or those that are not exclusively masculine or feminine‍, saying ‘I don’t think there’s any evidence for it.’”

Indeed, “Peterson said that if a student asked him to be referred to by a non-binary pronoun, he would not recognize their request: ‘I don’t recognize another person’s right to determine what pronouns I use to address them. I won’t do it.’”

And what was it that caused this professor to speak out, potentially endangering his career? “Peterson told the National Post that he decided to make the video and go public with his views after receiving a memo from university HR outlining new mandatory anti-racist and anti-bias training. ‘That disturbs me because if someone asked me to take anti-bias training, I think I am agreeing that I am sufficiently racist or biased to need training.’”

You can expect more and more responses like this, since there’s only so far things can bend before they snap and break.

After all, when the naked emperor not only begins to flaunt his new “clothes” but orders everyone to celebrate his wardrobe, the gasps of shock will quickly turn to shouts of mockery.

A person can only disguise his nakedness for so long.

Why Are We Trying to Gain the (Moral) Approval of the Left?