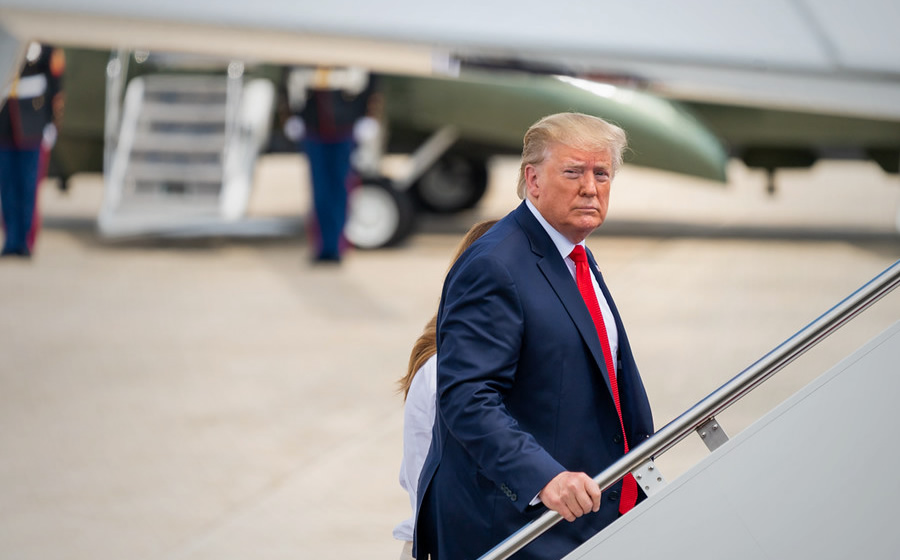 President Donald Trump and First Lady Melania Trump board Air Force One at Joint Base Andrews, Md. on Friday, July 5, 2019, to begin a weekend trip to Bedminster, N.J.

There is a national outcry over the president’s “go back” home tweets. They were directed at “‘Progressive’ Democrat Congresswomen, who originally came from countries whose governments are a complete and total catastrophe, the worst, most corrupt and inept anywhere in the world (if they even have a functioning government at all).”

From Hillary Clinton to rank and file Democrats, Trump’s remarks have been condemned as “racist, xenophobic and bigoted.”

His series of three tweets accused these Congresswomen of “viciously telling the people of the United States, the greatest and most powerful Nation on earth, how our government is to be run.”

So interesting to see “Progressive” Democrat Congresswomen, who originally came from countries whose governments are a complete and total catastrophe, the worst, most corrupt and inept anywhere in the world (if they even have a functioning government at all), now loudly……

….it is done. These places need your help badly, you can’t leave fast enough. I’m sure that Nancy Pelosi would be very happy to quickly work out free travel arrangements!

He then asked, “Why don’t they go back and help fix the totally broken and crime infested places from which they came. Then come back and show us how it is done.”

He added, “These places need your help badly, you can’t leave fast enough. I’m sure that Nancy Pelosi would be very happy to quickly work out free travel arrangements!”

Then, in typical Trumpian fashion, after the tweets produced a severe backlash, he doubled down on his comments. He tweeted, “So sad to see the Democrats sticking up for people who speak so badly of our Country and who, in addition, hate Israel with a true and unbridled passion. Whenever confronted, they call their adversaries, including Nancy Pelosi, ‘RACIST.’ Their disgusting language…..

“…and the many terrible things they say about the United States must not be allowed to go unchallenged. If the Democrat Party wants to continue to condone such disgraceful behavior, then we look even more forward to seeing you at the ballot box in 2020!”

How should we respond to these tweets? Was the President guilty of crass, open, and vile racism?

To put things in context, Trump was clearly responding to comments from Rep. Ilhan Omar. She claimed, “We live in a society and govern in a body that might value the life of a dog more than they value the life of a child who might not look like theirs.”

But out of the “progressive” Democrat Congresswomen whom he targeted, only Omar was born outside the USA. (She was born in Somalia.) The others, including Alexandria Ocasio-Cortez, Rashida Tlaib, and Ayanna Presley, were all born here in America.

So, the President’s tweet was certainly inaccurate in claiming that they “originally came from countries whose governments are a complete and total catastrophe.” (Hillary Clinton, for her part, was quick to pick up on this. She tweeted, “They’re from America, and you’re right about one thing: Currently their government is a complete and total catastrophe.”)

Whatever Trump’s intent, I cannot support him saying to these Congresswomen: “you can’t leave fast enough.”

That being said, and as much as I continue to wish that the President found a less offensive way to express himself, I personally didn’t find his tweets to be racist.

National Solidarity Rather Than Skin Color

Inaccurate, yes, insofar as only one of the Congresswomen in question was born outside of America.

Inappropriate, yes, insofar as Mr. Trump is still the president of the whole country. He does more harm than good when he unnecessarily alienates other Americans.

But, to repeat, I don’t find his tweets to be racist.

America has opened the door to people like Ilhan Omar, whose family escaped from the hellhole that Somalia had become. And America has given Omar and other immigrants like her incredible opportunities to succeed and flourish.

In Trump’s perception, Omar and her political colleagues are biting the hand that feeds them, showing ungratefulness rather than appreciation. Criticism rather than gratitude.

In Trump’s mind, these women are quick to condemn “the greatest and most powerful Nation on earth.” Then, they turn around with radical, socialist solutions to our national problems.

Interacting With the Substance

Headlines proclaim, “Trump Tells Freshman Congresswomen to ‘Go Back’ to the Countries They Came From.” However, a racist would not say, “Then come back here once you help fix these other countries.”

But that was Trump’s whole point.

If you have so much know-how, then go back and fix the countries you came from, “Then come back and show us how it is done.”

If America is to terrible and you have the solutions, then go improve these other countries that are in such terrible shape. And once you’ve transformed those nations, then by all means, get back over here and show us a better way.

Again, I have issues with some of the language in these tweets like many others, but I do not personally find them racist.

Of course, the president could have found a much less offensive way to get the same message across. But if he did, he would not have been Donald Trump.

We do best, then, to interact with the substance of his tweets rather than defend him at any cost or condemn him as a racist monster.