So What If President Trump Didn’t Recite the Apostles’ Creed? 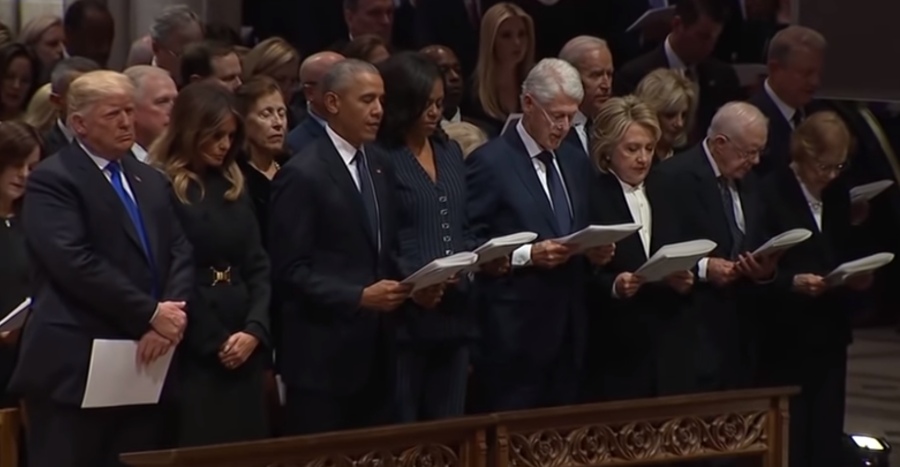 Evangelical leaders who voted for Donald Trump have been subjected to a fresh wave of mockery after he (and first lady Melania) failed to recite the Apostles’ Creed at the funeral for President George H. W. Bush. As the Huffington Post headline declared, “Every President Recited The Apostles’ Creed Except Trump, And People Definitely Noticed.”

Songwriter and recording artist Richard Marx tweeted, “Hey @Franklin_Graham here’s your ‘evangelical president’ NOT reciting the Apostles’ Creed at the funeral of your father’s friend. Maybe he thinks it’s the name of the next movie with Stallone and Michael B. Jordan.”

Or, as stated in the concise tweet of CNN commentator Keith Boykin, “This is your ‘Christian’ evangelical president.”

In that regard, I have not been disappointed. To the contrary, I have been happily surprised.

During the presidential campaign, did I take Trump’s references to the Scriptures seriously? No.

Was it meaningful to me when he held up his family Bible at his rallies? Absolutely not.

Did it surprise me when he really couldn’t quote a single, favorite verse? Not in the least.

And that’s why it didn’t surprise me when he remained silent during the recitation of the Apostles’ Creed.

As to why he was silent, God knows.

Perhaps he didn’t want to put on a religious show.

Perhaps he was committed to being totally quiet and out of the way during the Bush funeral.

Perhaps he was unfamiliar with the words.

Perhaps he’s not a true Christian and so had no interest in making the statement of faith.

To repeat: God knows why he didn’t recite the creed.

But, to repeat: His silence is of no material concern to me, since I would rather have a president who kept his promises to evangelicals and didn’t worship publicly than a public worshiper who broke his promises to us.

Would it be even better to have a fervent, committed, steady, mature, evangelical Christian who was as strong and determined as President Trump?

Absolutely, and we continue to pray for God to work in his life.

No Reason For a Religious Show

At best, he is a work in progress (as all of us are, to one extent or another). And, that being the case, I see no reason why he should put on an outward religious show.

Again, it is certainly proper protocol to participate outwardly in the religious rites at a funeral service. And, to my knowledge, there’s nothing in the Apostles’ Creed with which Trump would disagree.

But what if his silence had nothing to do with his faith or the lack thereof? What if, again, it had to do with him being quiet for other reasons? After all, his very presence at the funeral was a delicate matter.

Or, to come at this from a different angle, what if, instead of being silent, he had sung the hymns with gusto and recited the Creed with full-throated enthusiasm? Would not the same critics now mock him for his religious display? “Just look at that hypocrite! Who does he think he’s fooling?”

Either way, he’d receive his fair share of criticism, as would those who voted for him.

God is Using Him For Good

But even if it was the worst case scenario, namely, that he was silent because he is not a true believer in Jesus, that would only confirm the “Cyrus” prophecies about him. (Namely, that God raised him up for His own good purposes, despite the fact that Trump himself did not know God, just as he raised up Cyrus, who was an idol-worshiping pagan king. See Isaiah 45:1-4, and note carefully the last words of verse 4.)

To be clear, I have said for more than three years that we make a mistake when, as evangelicals, we present the president as “Saint Donald” or when we whitewash his worst words. We can support him and pray for him without being puppets and lackeys. We can stand with him while expressing our disagreement and differences.

But as long as he continues to nominate pro-life justices and push back against LGBT extremism and fight for our religious liberties and combat radical Islam and stand with Israel (among other things), he has my ongoing support.

And that holds true whether he himself is a genuine Christian or not.

To Recite or Not To Recite the Creed: Honorable or Hypocritical?