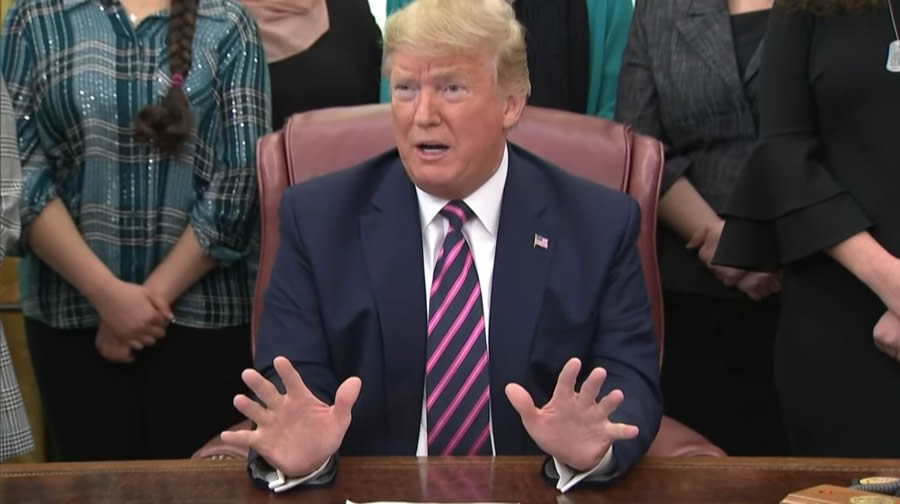 Claiming that “there’s a growing totalitarian impulse on the far left that seeks to punish, restrict and even prohibit religious expression,” Donald Trump has guaranteed that while he’s in office, “we will not let anyone push God from the public square. We will uphold religious liberty for all.”

Of course, President Trump is referring to the issues of religious freedom and prayer in schools. If that quote was ever-so-lightly reworded, though, one might think he was talking about the current expression of church in America.

Of course, nobody would balk at somebody offering up a prayer during a church service in most local churches today. But the spirit of intercession is certainly quenched, restricted or even fully rejected in too many places with the word church etched above the doorposts.

“It is a culture war,” Trump said. “You have two sides and you have a side that believes so strongly in prayer and they’re being restricted and it’s getting worse and worse and I think we’ve made a big impact,” he added.

Now, that statement by President Trump could even more easily be applied to the church. There most certainly is a culture war. Those who are contending for an atmosphere of Spirit-driven prayer on Sunday mornings are being restricted by those who would feel uncomfortable in such an atmosphere. It’s the remnant versus the religiously curious.

Understand, I’m not talking about saying prayers. I’m not referring to prayer requests or telling God about our ailments. When I say prayer I mean a furnace of intercession, where people throughout the congregation are decreeing, declaring and pounding Heaven with fiery zeal that would wake the dead. Literally. The sleepers must arise and the comatose must be shaken out of their slumber. A corporate spirit of prayer does just that.

Let’s bring it back just for a moment to the news of the day. President Trump is proving himself to be a champion of religious freedom. He should be applauded for that.

The president announced from the Oval Office that his administration was taking “historic steps to protect the First Amendment right to pray in public schools.”

Does this proclamation carry any weight — will it have any impact — if it doesn’t result in prayer movements being launched in public schools? If nobody is praying, is this announcement a wasted effort? No, I don’t believe it is. Let’s unpack it just a bit, though. The analysis can also be applied to the church.

I do believe affirmation of prayer in public schools accomplishes one important thing. It officially acknowledges God and everybody’s right to worship him, both privately and publicly. It authorizes students and teachers to bring deity into the conversation. I believe President Trump’s decree has authority in the spiritual realm. So you’d better know the enemy is going to fight against it hard, just as he did in 1962, when prayer in schools was originally outlawed. So, instead of a vehicle for actual intercession, this move by our President accomplishes something else — it establishes authority for Christians to publicly declare that Jesus is Lord.

Here’s another question, now. Is it better for prayer in schools to be authorized, yet the schools be devoid of a spirit of prayer? Or for prayer in schools to be banned, resulting in an underground movement of intercession? The right answer is obvious: For prayer to be authorized and for the spirit of prayer to overtake our classrooms. We want both. Consider this as we leap from the school system to the church.

Prayer has never been legally banned in the church in America, for now at least. Sadly, generally speaking, the first school scenario I presented above seems to be manifesting in the church. Prayer is allowed yet churches are devoid of a spirit of intercession.

I propose that if most people in a local church only attend one service a week, most probably on a Sunday morning, that service must be a strategic, passionate and supernatural prayer meeting. The power of prayer is too great to relegate it to an off day, at an unusual hour, in a side room. Prayer is too important to shelve it in favor of a little music, unnecessary announcements and boring public speaking.

The best prayer meetings are filled with decrees, declarations, spiritual songs, proclamations of Scripture and prophetic revelation. Yes there will be anointed preaching. Yes there will be explosive worship. But they will be driven by an atmosphere of intercession. Church cultures will change from natural to supernatural, and people will finally, many for the first time, have a personal encounter with the One they decided to surrender their lives to.

I suggest it’s actually a bit embarrassing that a leader of a secular society, our President, is doing more to advance the cause of prayer than many leaders of Christian congregations are. Are the parallels perfect? Of course not. I understand that. I invite you to think about this, however. Is there freedom of intercession in your church, or is it minimized? Are intercessors shunned? Are there passionate cries of fervent prayer on Sunday mornings. Or is the spiritual temperature kept at a comfortable level so the lukewarm won’t grow uneasy?

I’ve made a promise to every person I had the privilege of giving leadership to over the years: I refuse to tone down the activity of the Holy Spirit out of respect of those less hungry.

Prayer must be front and center as the driver of the culture of every church. Let the visitors be uncomfortable and the pretenders be convicted. It’s time for the burning ones to awaken; for pastors to lead people into passionate, heart-wrenching, wonderful prayer as the foundational expression of their local assemblies. We must stoke the coals in the furnace of intercession in our churches. President Trump is doing it for us in the schools.

“If my people who are called by my name humble themselves, and pray and seek my face and turn from their wicked ways, then I will hear from heaven and will forgive their sin and heal their land” (2 Chronicles 7:14 ESV).

John has authored ten books, is a regular contributor to Charisma Magazine and other publications, has appeared on Christian television and radio and directed one of the primary internships at the International House of Prayer (IHOP) in Kansas City. Additionally, he has planted two churches, has initiated two city prayer movements and a school of ministry. John, his wife Amy and their five children live in beautiful Branson, Missouri where, in addition to ministry, they operate attractions including escape rooms and axe throwing. A large and growing library of audio and video teachings, articles, books and other resources can be found on his website at www.burton.tv.