They had power, influential friends and escaped justice for years. But they had something else in common, too. 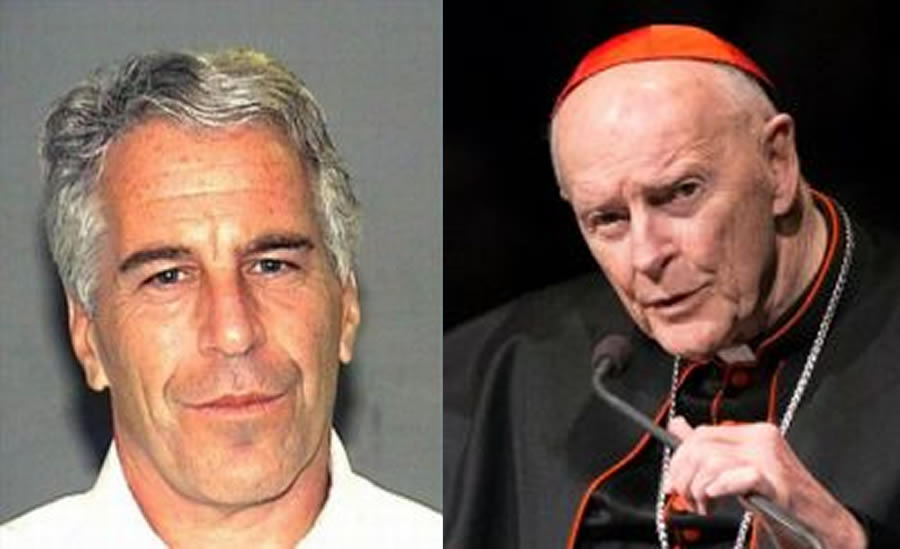 There are several parallels, some of them ominous, between two recent scandals that have dominated both religious and secular headlines.

The powerful Catholic Cardinal Theodore McCarrick passed out money, promotions, and power. The popular billionaire Jeffrey Epstein passed out lavish gifts, luxurious vacations, and, for those who wanted it, sex — lots of it.

On Sunday, April 3, 2005, the day after the death of Saint John Paul II, Theodore Cardinal McCarrick and at least a dozen other priests concelebrated the 10 a.m. Mass at Saint Matthew’s Cathedral in Washington. In attendance were, among other dignitaries, Secretary of State Condoleezza Rice and Massachusetts Senator Ted Kennedy.

Cardinal McCarrick came out to the pews before Mass, fully vested except for his chasuble, and greeted Senator Kennedy warmly.

After the Mass, as the celebrants processed out, Senator Kennedy stood up and took Cardinal McCarrick’s arm. Beaming, they strolled arm in arm down the aisle towards the exit.

McCarrick oozed power. He was a trusted adviser of Bill Clinton, Barack Obama, and Pope Francis. He raised gobs of money from faithful Catholics. And he was a sexual predator and child abuser for years.

And Jeffrey Epstein? He was everybody’s friend. An investor who never finished college, he owned the most expensive home in Manhattan, along with residences in Paris, Miami, New Mexico, and a compound comprising the entire island of Little St. James in the US Virgin Islands. He showered Harvard and MIT with donations, even planned to have portions of his anatomy frozen for resuscitation when future scientific advances permitted it. Everything seemed possible for him — including abusing dozens of underage girls for his own pleasure and those with whom he shared them.

Both men were world-class power players, each enjoying powerful friends in extensive and influential networks. Each had escaped justice for years. But today we know that both of them proved pedophiles and perverts throughout their long and sordid careers.

The first child whom McCarrick baptized as a priest was baby James Grein. McCarrick began molesting Grein when the boy was only 10 years old. The abuse continued for years.

The first child whom McCarrick baptized as a priest was baby James Grein. McCarrick began molesting Grein when the boy was only 10 years old. The abuse continued for years.

Epstein was a notorious predator who preyed on little girls, apparently within an exhaustible supply. He “was reportedly provided with underage girls ages 12 and up through a French modeling agency,” the story goes. He and a female associate allegedly ordered the girls to serve sexually not only Epstein, but other men, many of them prominent businessmen and politicians.

All the Way to the Top

Both men were the subject of sham investigations and sham punishment. Epstein spent 13 months in a Florida jail for offenses that merited life without parole. He even got permission to go to his office six days a week. Pope Benedict had severely limited McCarrick’s public ministry, but Pope Francis reversed that. He sent McCarrick as his roving ambassador around the world.

Both men had secrets. Epstein’s “little black book” is described as the “Holy Grail … to unraveling [his] sprawling child-sex network.” Before New York City Medical Examiner Dr. Barbara Sampson confirmed that Epstein had committed suicide, countless people began to ask who needed to eliminate him the most.

And McCarrick? According to Archbishop Carlo Maria Viganò, Pope Benedict’s former Ambassador to the United States, McCarrick sat at the center of a vast web of sodomites and gay-friendly prelates who have infested the Church’s hierarchy. Viganò alleges that the network extends all the way to the top in the Vatican, and has called on Pope Francis to resign.

Remember, it was McCarrick who arranged for the looting of the Papal Foundation to the tune of $25 million, to bail out a shady Italian hospital. No journalist got to question McCarrick about that. And now he’s locked away in a comfortable church-funded retirement, so none likely ever will.

When journalists confronted Pope Francis with Viganò’s charges, he replied, “I will not say a word about that.” He hasn’t done anything about it either. But the hierarchy’s “Sodomite Syndicate” is powerful, and Viganò is hiding in an undisclosed location in fear of his life.

And Epstein? His death hasn’t stopped the investigations surrounding his sex trade. No doubt lots of powerful folks are trying to shut them down. A full accounting of his trafficking, its victims, its customers, and its enablers could undoubtedly bring some very major figures to ruin.

Archbishop Viganò’s charges are also in limbo. Last fall, America’s Catholic bishops made a furtive attempt to start their own investigation. That ended thanks to the orders of McCarrick intimate and Chicago Cardinal Blase Cupich, who leads a pro-homosexual faction in the bishops’ conference. One that has effectively taken control of the American hierarchy. The investigation now lies in the hands of the very Vatican powers that Viganò has identified as members of the sodomite syndicate.

As for the future? Well, Epstein is dead. McCarrick — now 89 years old — is living out his life “in prayer and penance” in a Kansas friary in the middle of nowhere.

According to Social Security Actuarial Tables, the former cardinal archbishop has a life expectancy of two years. Some Catholic prelates appear to desire that he die in peace, alone, and as soon as possible. But many Americans — and not only Catholics — want the truth that Pope Francis and America’s Catholic bishops have promised, but not delivered, regarding the sex-abuse and cover-up scandals that have riven and wracked the Church for two decades.

Yes, the questions surrounding these two figures abound. Will we get answers?

Or will the truth get buried along with their bones?