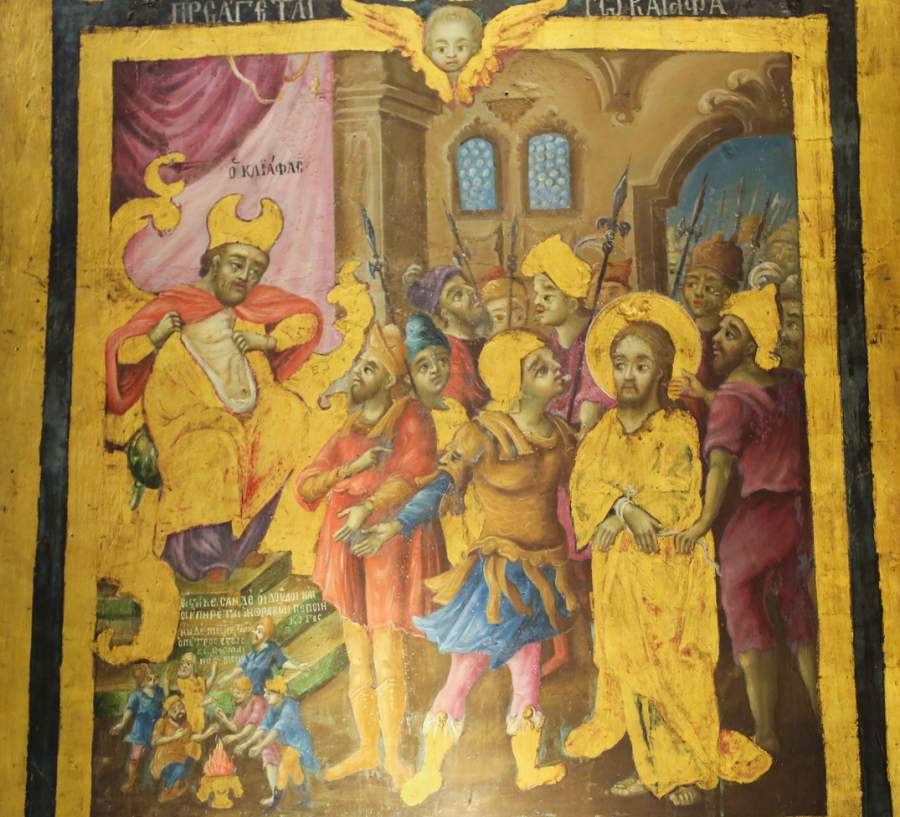 Greek Orthodox Fresco in the Church of the Holy Sepulchre in Jerusalem, depicting the Sanhedrin trial of Jesus, who is brought before Caiaphas the High Priest.

“But one of them, Caiaphas, who was high priest that year, said to them, “You know nothing at all; you do not understand that it is expedient for you that one man should die for the people, and that the whole nation should not perish.” (John 11: 50-51)

Perhaps the central vocation of Christians in public life is to stand alongside the scapegoats. Then to rush to the aid of those whom others abandoned. Our Lord spoke for the poor whom no one cared for under Rome’s unjust occupation. He aided the Samaritan woman, and even the woman caught in adultery. The early Church joined the Jews at the walls of Rome, rescuing infants exposed to die in the cold. The Church preached to slaves and masters their moral equality. Saint Ambrose stood down a Christian emperor, Theodosius, for his acts of tyrannical cruelty. When Spain and Portugal signed on and started to profit from North African slave-trading, pope after pope denounced it — to no avail.

In our time, Pope Pius XII firmly condemned the evils both of Communist collectivism and Nazi racism. Leaning on old Soviet propaganda talking points, some damn him now for relying more on stealth, secret diplomacy, and deception than bold denunciations of the Holocaust. But Rabbi David Dalin documents that Pius saved hundreds of thousands of Jews across Europe. He threw open monasteries and convents to hide entire Jewish families, and told papal nuncios to distribute false baptismal certificates.

But perhaps he could have done more. On the Last Day, each of us will learn how far our efforts at imitating Christ fell short.

What is Pope Francis doing now for the most abandoned people on earth? Surely if we are meant to see Jesus’ face in “the least among us,” Francis ought to glimpse Him among those with fewest rights and allies today. Yes, unborn children, of course. But Francis has shown a strange aversion to pro-life political leaders from the U.S. to Hungary and even his native Argentina. Francis’ other political interests seem to him to outweigh the unborn, as if the prospects of economic migrants and doubtful climate policies were more urgent than willful murder.

Shocking as it seems, let’s set the unborn aside for a moment. Who’s next on the list of human beings, images of God for whom Christ came to die, whom the World has seen fit to forget? Surely it’s the Uyghur Muslims who live under Chinese occupation. And in the midst of his frequent, long lists of humanitarian crises, the Uyghurs never get mentioned. Human rights activist Benedict Rogers has called Francis out for this willful omission. He points to Francis’ Urbi et Orbi address on Christmas Day

when he yet again failed to mention the genocide of the Uyghurs, the persecution of Christians in China, the destruction of Hong Kong’s freedoms, forced organ harvesting from prisoners of conscience, the crackdown on all forms of civil society or free expression, atrocities in Tibet and other human rights violations perpetrated by the Chinese Communist Party regime.

Pope Francis mentioned the Uyghurs briefly — for the very first time and in the mildest of mild passing references — in his new book Let Us Dream: The Path to a Better Future, he has said nothing further since. And Bejing reacted furiously even to that very modest comment. But is the pope seriously going to allow himself to be cowed by Xi Jinping’s fury and censor out references to some of the world’s gravest human tragedies just because they occur in China? Seriously?

The Vatican’s Molotov/Ribbentrop Pact with China

It’s worse than Rogers is even willing to say. The secret deal that Francis sent now-disgraced child-molester Theodore McCarrick to make with the Chinese regime was less a peace treaty than an alliance. It resulted, whistleblowers report, in backdoor secret payments of billions to the Vatican. As leading Chinese Catholics such as Cardinal Joseph Zen complained, the deal made religious freedom even scarcer in China. Chinese Christians face worse persecution now than they did before. Meanwhile, more than a million peaceful Uyghur Muslims live in concentration camps. They work as slave laborers producing Nike sneakers, Apple phones, and even picking cotton. Uyghurs are subject to atheist indoctrination, forced marriages, forced abortions, and — even more grotesquely — vivisection.

That’s right, Forbes Magazine has documented that the Chinese regime steals valuable human organs from living political prisoners. Then it sells them for millions on the international black market. Billionaires who ruined their livers from too much Dom Perignon can now replace them with those torn from imprisoned believers (Christian and Muslim).

The Vatican had an excellent opportunity to address this. Last year, its chief authority on Catholic social teaching, Bishop Marcelo Sorondo, spoke to a conference of China’s organ harvesters (i.e., thieves). Did he boldly, like John the Baptist, speak truth to power? Sadly, he didn’t. Instead he used that ghoulish occasion to praise the Chinese regime, and suggest a papal visit.

It Is Expedient that the Uyghurs Die

Does Pope Francis really believe that it’s expedient that one of the earth’s peoples, the Uyghurs, be tormented and erased, for the sake of achieving all his other humanitarian goals?

We hope not. We ask Pope Francis to break his pusillanimous silence on China’s abuses. We ask Francis’ representatives in America, especially Cardinal Wilton Gregory of Washington, D.C., to speak as well. Cardinal Gregory could do this quite easily, taking an Uber across town on Dec. 29 to the U.S. State Department. There from 1-3 p.m. the elected representatives of the Uyghur people will join human rights activists of every faith. Their goal? To get the U.S. to designate China’s efforts to eliminate the Uyghurs as an ongoing act of genocide.

Depart From Me, You Cursed

History is watching, Your Holiness. On which side would you like to be remembered? Christ is watching, Jorge Bergoglio. What will you hear from Him on the day of Judgment? God forbid it is this: