ANALYSIS: What Did Pope Francis Really Think of the “Communist Crucifix”?

Press accounts have been muddled by misreporting and wishful thinking. 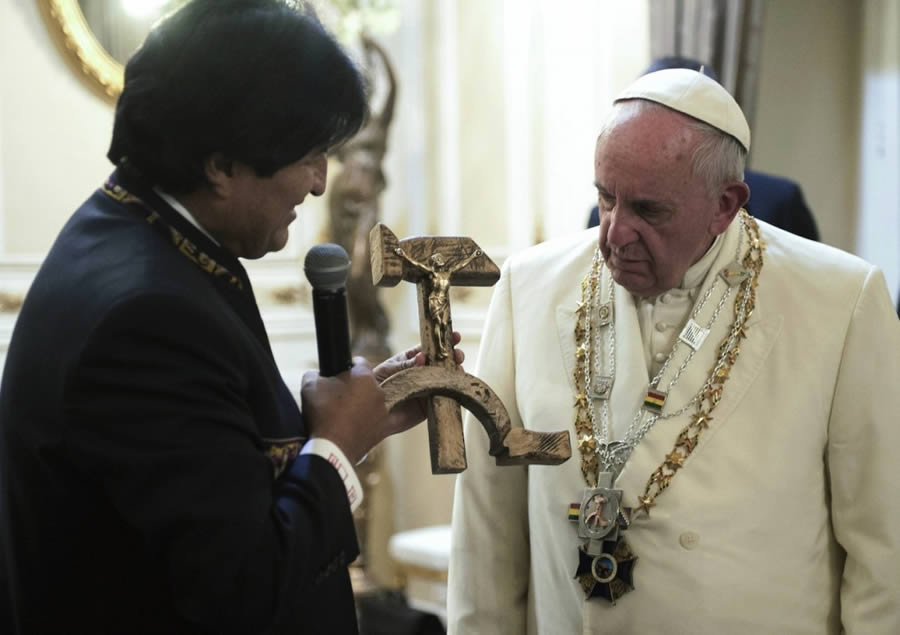 When Pope Francis was presented with the now-infamous “Communist crucifix” by the hard-line socialist president of Bolivia, Evo Morales, the world took note. As Joe Carter of the Acton Institute explained, the crucifix

is a reproduction of one carved during the 1970s by Fr. Luis Espinal Camps, a Spanish Jesuit who was a missionary in Bolivia and was killed in 1980 by a right-wing paramilitary death squad. One of Espinal’s friends and fellow Jesuits said Espinal’s intent in creating the image was for the church to be in dialogue with Marxism, and that Espinal had altered his crucifix to incorporate the Communists’ most potent symbol: the hammer and sickle.

Immediately, the press spun into action, trying to interpret the meaning of the gesture and of the pope’s reaction.

Nearly everyone was inclined to cut the pope the maximum slack. World leaders are constantly presented with gifts they never sought, which sometimes embarrass them — or even violate a law in their native country against accepting items of value. Pope John Paul II was famously gracious and accommodating of foreign mores — to the horror of traditionalists, for instance, when he didn’t object to bare-breasted women attending an event. (That was the local custom, and didn’t violate prevailing norms of modesty.) Seen in this light, one might try write off this whole event as akin to a politician visiting an island with a cargo cult, and accepting the gift of a “sacred” World-War II-era rusty toaster. It’s just “how they do things down there.”

But such a reaction is appallingly condescending. Bolivians aren’t primitives. They have access to Spanish editions of The Gulag Archipelago, the memoirs of Cuban dissidents, and the writings of popes such as Leo XIII, who said of socialists:

They leave nothing untouched or whole which by both human and divine laws has been wisely decreed for the health and beauty of life. … They debase the natural union of man and woman, which is held sacred even among barbarous peoples; and its bond, by which the family is chiefly held together, they weaken, or even deliver up to lust. Lured, in fine, by the greed of present goods, which is “the root of all evils which some coveting have erred from the faith,” they assail the right of property sanctioned by natural law; and by a scheme of horrible wickedness, while they seem desirous of caring for the needs and satisfying the desires of all men, they strive to seize and hold in common whatever has been acquired either by title of lawful inheritance, or by labor of brain and hands, or by thrift in one’s mode of life.

Evo Morales knew better, or should have, than to give a hammer and sickle to a pope.

Joe Carter pointed out the unintended irony of portraying Jesus nailed to a hammer and sickle: “Because of the number of Christians who were martyred under communist rule, it is perhaps fitting our Lord should be displayed as suffering and dying on this symbol of evil and perverted ideology.”

George Weigel opined in National Review that this incident made him wonder “what the famously irascible Pope Pius XI would have done, had Joachim von Ribbentrop, foreign minister of the Third Reich, presented him with a swastika-crucifix; Herr von Ribbentrop would probably have had a pontifically inflicted dent in his thick skull.”

Let’s leave aside the question of how we wish the pope had reacted. It’s hard enough to get a straight account of how he actually did react. Initial reports, which were echoed here at The Stream, indicated that the pope frowned visibly and said something along the lines of “That’s not right.” Accounts also claimed that the pope declined to take the crucifix back home with him, depositing at a shrine along with two official decorations Morales gave him (one of them adorned with the same crucifix image).

Patrick Archbold, however, points out that these initial reports were mistaken:

On the video, when the gift is first presented to him, Pope Francis appears to register some slight surprise at the crucifix. He quietly says something, shaking his head slightly, but because of the poor audio quality, it is unclear what the Pope said.  Later that same morning, some suggested after examining the video that what the Pope might have said was “No está bien eso,” or “that’s not right.” Soon after, an article at Romereports.com suggested the same comment by the Pope. Catholic social media fired back at those criticizing the pope’s response, wielding this new development. Critics were accused of jumping the gun.

But as we moved later into the day on Thursday, better quality audio of the incident became available and it quickly became clear that instead of saying “No está bien eso,” that the Pope actually said, “No sabía eso,” or, “I didn’t know that.”  It became clear that the Pope was not rejecting the item, but rather reacting to something President Evo Morales had said to him. Coupled with his subsequent reactions – all smiles – it was obvious that the Pope had indeed accepted the gift without rebuke or concern.

Archbold complained that major Catholic media were slow to correct their reports that the pope had shown disapproval of the controversial gift. No doubt there was some wishful thinking at work. Few want to believe that Pope Francis appreciated such a gift.

The traditionalist blog site Rorate Coeli cited an interview with the pope, translated by Catholic News Agency, where Francis made it clear that he was not offended by the crucifix, and that he had indeed brought it with him out of Bolivia. Indeed, in remarks reported by the Vatican news site News.Va, the pope described Morales’ gift as a “courteous gesture,” and made reference to the “the honoured sacrifice of Fr. Luis Espinal, S.J.,” the Liberation theologian/martyr who first carved the image.

Bolivian political scientist Jorge Velarde Rosso analyzed the symbolism of these events in a column for the Acton Institute, citing with alarm the pope’s apparent praise for Morales’ far-left government:

Immediately after the initial protocol greetings and the “brother president” salute, Francis said: “With your permission, I would like to offer a few words of encouragement in support of your work, which is ongoing.” To make clear the importance of these few lines, we must remember that the pope was addressing a head of state and his government. The lines can seem somewhat formal, but with these words it is hard to deny that Francis made clear his support and even admiration for “Brother” Morales. …

With this speech and visit, Francis gave months of free advertising to Morales and his government. And perhaps what is more worrisome, the pope clearly (albeit perhaps unintentionally) provided some kind of religious legitimacy to the current policies pursued by the present government in Bolivia. Why else would the pope refer to his support for Morales’ “ongoing work”?

Velarde Rosso noted that after his meeting with Morales, the pope went on to speak at the “Second World Meeting of Popular Movements, a “gathering of people who are, politically speaking, leftist populists. He used language remarkably similar to that used by other leftist populist Latin American politicians.” (For an analysis of the commonalities between Pope Francis’ economic views and populist policies, see Samuel Gregg here at The Stream.)

Velarde Rosso asked poignantly, “Where does that leave those Catholics who love Pope Francis and recognize his authority as the Successor of St Peter but who disagree with leftist populist ideas and the policies pursued by Bolivia’s current government?”

Catholics around the world are asking similar questions.