Mass Muslim Migration to Europe is Suicidal, and Misguided Christian Compassion Enables It

One of the greatest thinkers of the nineteenth century was Frederic Bastiat. He was a “classical liberal” who favored the maximum freedom for citizens for the longest possible time. He didn’t argue for anarchy, or a state too weak to defend its borders and citizens’ rights. Such freedom is fleeting — it vanishes when the first bully, local or international, can rally enough thugs to steal it. In today’s terms, we would call Bastiat a small government conservative, or even a “Tea Party Catholic.”

One of Bastiat’s greatest insights was the tendency of leftists (and among them too many Christians) to fixate on immediate problems, and grab the nearest blunt instrument to solve them — while refusing to think of the pain they unjustly impose on innocent third parties. He illustrated this point in a classic essay, “That Which is Seen, and That Which is Not Seen.” In it we learn of the “Broken Window Fallacy,” which can afflict a tender-hearted person who sees a storekeeper’s window get broken. The onlooker chooses to look on the bright side: Look, here are two jobs created, one for a glassmaker and one for a window installer. With that in mind, he walks down the street with a hammer, smashing each window he encounters — or perhaps just the fanciest windows, of the shopkeepers he judges can afford to share the wealth.

What is wrong with this jobs program? As Bastiat patiently explains: 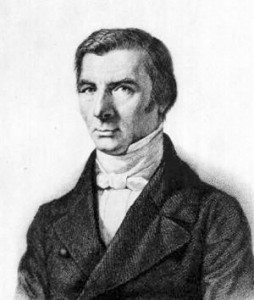 It is not seen that as our shopkeeper has spent six francs upon one thing, he cannot spend them upon another. It is not seen that if he had not had a window to replace, he would, perhaps, have replaced his old shoes, or added another book to his library. In short, he would have employed his six francs in some way, which this accident has prevented. … He would have spent six francs on shoes, and would have had at the same time the enjoyment of a pair of shoes and of a window. [italics mine]

The “unseen” victims, whose interests are disregarded, are the shopkeeper himself, and the shoemaker who goes hungry, since nobody’s buying shoes: they’re too busy replacing their windows.

Pope Francis: Defending the Seen but not So Much the Unseen

One influential would-be window breaker today is, sadly, Pope Francis. His legitimate Christian compassion for poor people worldwide has led him to grab hold of crude, mistaken theories of economics, which wherever they have been implemented have made things much worse for the poor, crippled the middle class and concentrated wealth in the hands of corrupt elites who know how to manipulate the government. In fact, such policies took Francis’ native Argentina, which was as rich as the United States around 1900, and turned it into an irretrievable basket case. Samuel Gregg’s learned explanation of how that happened appeared right here at The Stream.

Perhaps more troubling than Pope Francis’ personal economic theories are his statements on mass immigration, which are echoed by his deputies around the world, including the U.S. bishops. (See Cardinal Dolan’s attack on Donald Trump as an anti-Catholic “nativist.”) As John Allen reports, Pope Francis’ point-man on Italian politics, Bishop Nunzio Galantino, condemned those statesmen who are skeptical of mass immigration as “peanut venders … who in order to get votes say extraordinarily stupid things.” Galantino complained that European countries are too slow and stingy to offer asylum to migrants who claim refugee status, insisting: “It’s not enough just to save migrants at sea in order to soothe the national conscience.”

Fear of being inundated with asylum-seekers is most palpable in Italy, whose southernmost islands are among the easiest places to reach for the hundreds of thousands of Muslim migrants who will not move to neighboring Muslim countries, but would prefer to live in Europe — with its generous, taxpayer-funded cradle-to-grave welfare state. (Once admitted to a single EU country, migrants are free to resettle in those with the most generous benefits, such as Sweden or Denmark, as many thousands have already done.)

Repeatedly, the pope himself has issued ringing, would-be “prophetic” condemnations of citizens who fear the consequences of admitting millions of impoverished Muslim aliens into their countries. In an extraordinarily emotive sermon at Lampedusa, the landing place of many Muslim boat people, Francis said:

These our brothers and sisters seek to leave difficult situations in order to find a little serenity and peace, they seek a better place for themselves and for their families — but they found death. How many times do those who seek this not find understanding, do not find welcome, do not find solidarity! And their voices rise up even to God!

Their voices also rise up to the microphones of the BBC and CNN. The migrants’ stories are all over European and American media, and European governments are scrambling not merely to save them from drowning but to hear their asylum pleas and arrange for them resettlement and generous government benefits. These immigrants have been seen. It seems to occur to no one that such actions invariably increase the numbers of such asylum and benefit seekers.

Whose stories will never be broadcast, will go forever unseen? The millions who suffer from the predictable side-effects of admitting millions of low-skill migrants that cling to a savagely intolerant religion into a crowded, high-tech continent with stifling socialist economies that do not produce new jobs.

Also unseen are the thousands of Christians who have fled savage Muslim persecution, who now languish in camps without access to schools or the right to work. Unlike Muslims, they have no safe refuge in the Middle East, and they cannot gain passage to Europe. These are the genuine refugees, who left their homelands not for better jobs or welfare payments, but one step ahead of the killing squads of ISIS. So far only one European country, Slovakia, has offered these Christians preferential treatment over Muslim economic migrants — and the EU and the UN have sharply condemned Slovakia for this sane and Christian policy.

In previous decades, millions of Muslims were welcomed to take low-skill jobs, while Western Europe’s economy was booming. But today the greatest problem in nations such as Spain, Italy, and Greece — each a prime landing site for Muslim immigrants — is crippling double-digit unemployment. Those migrants who do seek jobs will be competing with already hard-pressed working class Europeans, whose ancestors sacrificed, fought, and died to build up those countries, which are now being colonized by Muslims whose forebears did absolutely nothing to earn a claim on those nations. Those Europeans, and anyone who pays confiscatory European taxes, are the unseen victims of well-meaning, reckless attempts to help the needy whom we can see — the Muslim immigrants. There is no nation in Western Europe with a serious labor shortage, which means that a high percentage of today’s migrants will be tomorrow’s welfare recipients.

And some of them will be next week’s jihadists. Just this week, a French train was attacked by a Moroccan-born Muslim immigrant, and a mass slaughter was only averted by the courage of unarmed American soldiers who rushed the heavily-armed jihadist. Muslim migrants and their children, along with converts they make in their Islamist mosques, are responsible for virtually all the acts of terror committed in Europe in the last ten years. Read the stories of these Islamists, and see how many of them spent most of their lives receiving welfare paid for by hard-working European Christians and post-Christians. Such welfare is widely regarded among Islamists as “jizya,” the tribute that non-Muslims ought to be paying Muslims anyway, according to the Quran.

The savage anti-Semitism that is finishing Hitler’s work by driving out Europe’s Jews is not a survival passed along by elderly Nazis; it’s as much a Muslim import as honor-killing and female genital mutilation. The sole cause of all this violence and hatred — mass Muslim immigration — remains unseen, because Europeans are too timid and beaten down by multiculturalism and politicized Christianity to look it in the face, and call it for what it is: A slow-motion conquest.