Please Don’t Clown Around When It Comes to Abortion 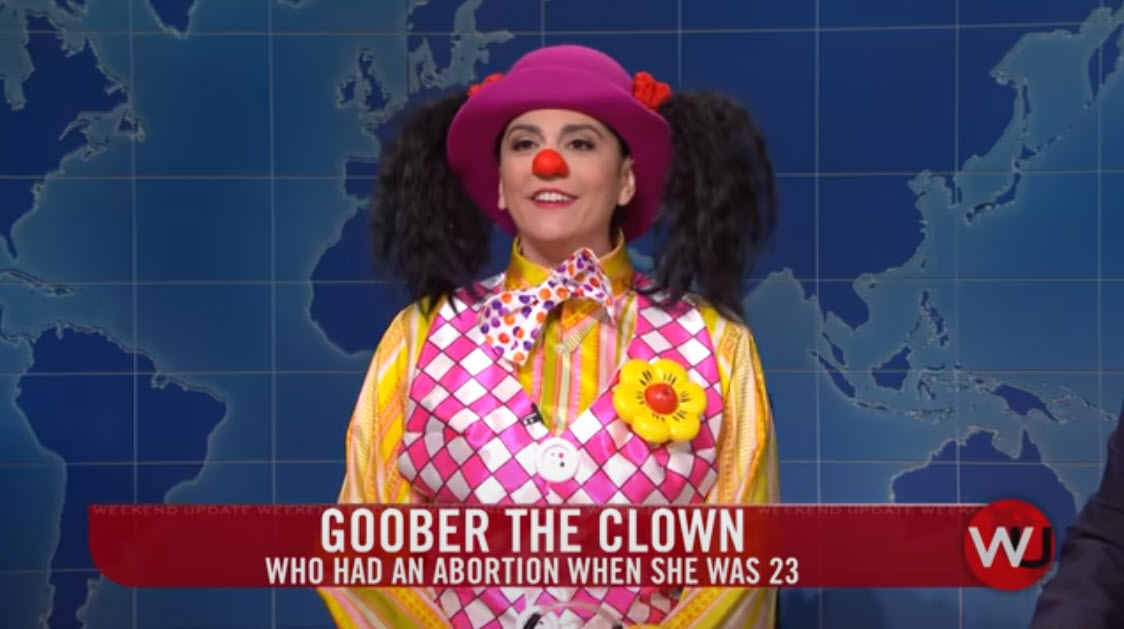 What on earth was Saturday Night Live thinking when it featured comedian Cecily Strong dressed up as pro-abortion advocate “Goober the Clown”? The skit was not only done in very poor taste (no surprise for SNL), but it was downright offensive, not to mention idiotic. To what purpose did it air?

Clowns, after all, are not supposed to be taken seriously. Why, then, have a clown advocating for abortion?

And clowns are associated with children’s entertainment, yet children are hardly the targeted demographic of SNL. Why, then, the clown?

We Do Not Clown Around About This

The skit begins with a male news host discussing Texas’s Heartbeat Act, which effectively bans almost all abortions after 6 weeks.

The host explains that “here to cheer us up” is “Goober the Clown, who had an abortion when she was 23.”

So, is that the purpose of the clown? To cheer the pro-abortion viewers as the pro-life movement continues to save the lives of babies?

As if cracking inane jokes in a clown suit were the best way to deal with the pain and trauma of abortion, not to mention the rejection and condemnation many women experience because of their abortions.

In Goober’s own words (spoken as her bow tie spins rapidly), “It’s a rough subject, so we’re gonna do fun clown stuff to make it more palatable. Wee!”

Wee? Really? This is how you respond to an effective pro-life bill in Texas?

Goober actually squirts the host with water (emanating from her lapel flower) while stating, “I had an abortion one day before my 23rd birthday!”

How funny! How hysterical! What a great, enjoyable, instructive skit!

After about a minute, Goober begins to get more serious (albeit while trying to make a balloon animal), explaining that she really doesn’t want to talk about abortion. But that’s all others keep talking about, with obvious reference to pro-lifers. (Forgive me if I’m wrong here, but I seem to recall quite a few abortion advocates, from Planned Parenthood to the Shout Your Abortion movement, talking about a woman’s “right” to abortion virtually day and night.)

Yes, Goober tells us, abortion was declared legal in the Clown v. Wade decision (again I ask, how on earth does this possibly help the abortion-rights’ side?), and that one in three clowns will have a clown abortion in her lifetime. And on and on it goes, getting even less funny (if that were possible) with every passing second.

Her Baby’s Life Was Over

Goober does explain what a relief it was when the doctor told her that she wasn’t an “awful person” for having an abortion and that her life “wasn’t over.” (As for her life not being over, the same could not be said for the baby in her womb.)

But hey, Goober explains, “I know I wouldn’t be a clown on TV here today if it weren’t for the abortion I had the day before my twenty-third birthday. Clowns have been helping each other end their pregnancies since the caves. It’s gonna happen so it ought to be safe, legal and accessible.”

Over on CNN, Brian Stelter gushed, “Take three minutes and watch the video if you haven’t seen it yet. On Twitter, it has already racked up more than 2.5 million views, according to the site’s metrics.” (As of this writing, it is now over 4 million views.)

An Evil That Shouldn’t Be Joked About

What a glaring example of what Jesus once explained — namely, that the world loves its own (see John 15:19). I guess clowning around about abortion resonates with quite a few people. (Do I hear someone say, “Wee!!!”???)

But what makes this all the more tragic is that, “At the Planned Parenthood headquarters in Chicago, Cecily Strong was the receptionist who opened the hate mail, opened the office, answered the phone. Dr. George Tiller was fatally shot in the head by anti-abortion extremist Scott Roeder while she worked there.”

So, “Goober” actually has a painful history when it comes to abortion, experiencing the very worst of anti-abortion hatred and violence. That is really sad to hear, and I do grieve over that.

Yet this is the very reason not to clown around about the subject, as if cracking inane jokes in a clown suit were the best way to deal with the pain and trauma of abortion, not to mention the rejection and condemnation many women experience because of their abortions.

Writing for the Daily Wire, Amanda Prestigiacomo noted that, “Actress and abortion advocate Alyssa Milano revealed last week that she struggled with feelings of guilt after having two abortions in her twenties, believing two miscarriages were a result of her abortions and later fearing that her children might be hurt for “karmic” reasons.

“‘I definitely had this moment of, “Well, I’m being punished,” basically for abortions in my twenties,’ Milano, 48, told ‘Me Becoming Mom’ podcast host Zoë Ruderman,” Today reported.

She also disclosed that she had fears that something bad might happen to her children Milo and Elizabeth due to her decision to have two children killed in utero.

“‘I always felt like, ‘What if something happens to these two little beings that I love so much? And is there a world in which they’re taken away from me for whatever karmic resolution needed to happen?’”

The Abortion Conversations We Should Be Having

But, to repeat, all of this underscores the need to sit down face to face and have honest, compassionate discussions with those on the “pro-choice” side, as well as to provide safe spaces for the many women grieving over past abortions, enabling them to open up their hearts.

In stark contrast, the last thing we need is someone called Goober the Clown to clown around about abortion. If there is any subject on the planet that does not comport with a ridiculous clown skit, it is the subject of abortion.

And to Ms. Strong, I urge you to put away that clown suit if you want to talk about abortion. If your heart still needs healing — and I am not your judge; only you know — clowning around will not bring the cure.