Phyllis Schlafly’s Legacy is a Challenge: Will We Prove Worthy? 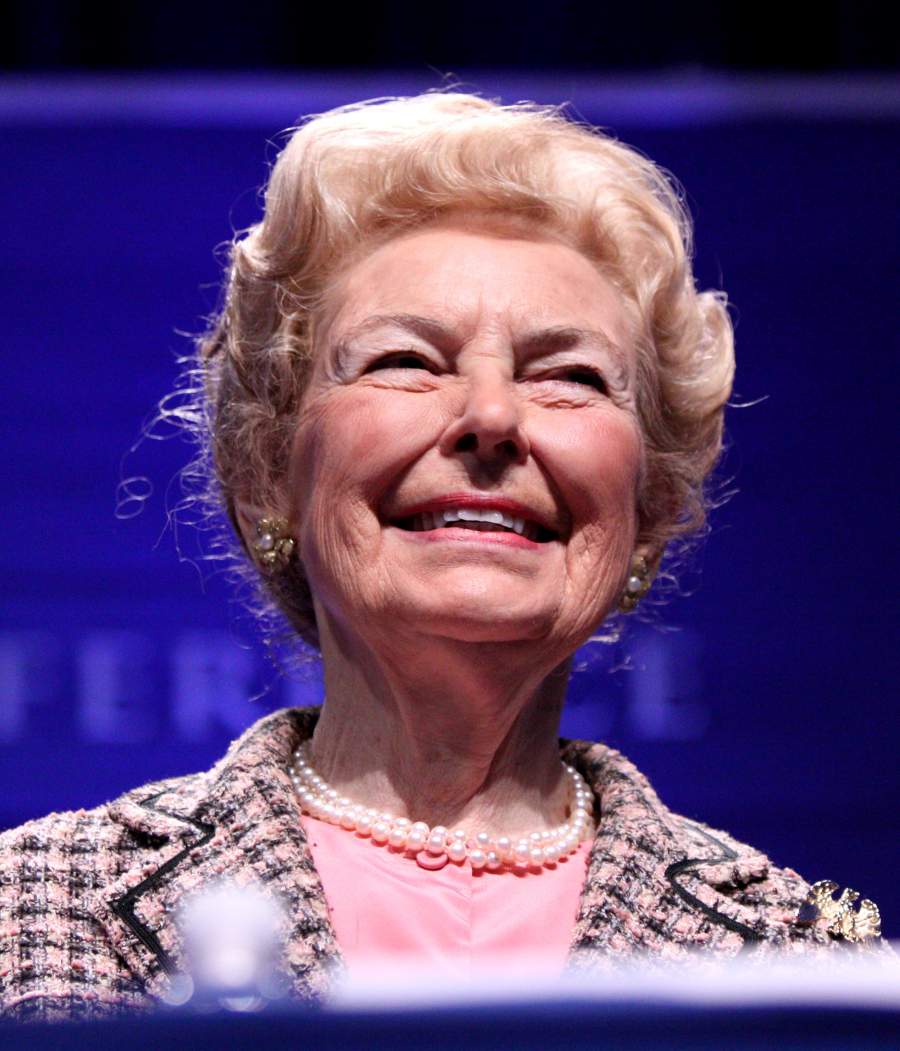 Phyllis Schlafly died on Sunday at age 92. That news is sad and elicits our prayers. But more than that we ought to be thanking God that she had been with us so long and accomplished so much. For the past decade at least it was a kind of miracle that Mrs. Schlafly was still with us, a magnificent survival from an older and saner America. That nation once embodied in real institutions and everyday life the key tenets of political philosophy that nowadays might sound like pipe dreams, or lofty abstractions for use in the GOP platform.

In fact, the soundness of that party’s platforms in recent years can be directly traced to Schlafly’s influence since 1976, when she bested the party’s “establishment” to insert a pro-life plank that has been there ever since.

Schlafly remembered an America where “rugged individualism” rubbed shoulders with strong institutions of community — the classic Anglo-American recipe for preserving ordered liberty. Its churches weren’t splintered over sexual politics. Its Boy Scout troops weren’t battered into surrender by litigious homosexuals. Its Girl Scouts didn’t raise money for Planned Parenthood. Its families were strong and stable, and its citizens were hopeful about the future.

That old America isn’t some Norman Rockwell idealized painting or cleaned-up fuzzy memory, but a fact borne out by statistics. Not that long ago — in the lifetime of Mrs. Schafly — Americans saw sex as properly kept for marriage, saw unborn life as sacred, and saw their country as a unique and honorable example to the nations of the world.

Nor was Schlafly’s America some happy historical accident. It was the fruit of long centuries of dogged political struggle, first in England then in America, in defense of moral principles asserting human dignity as the image and likeness of God — the same principles we champion here at The Stream.

Her America was also the fruit of war, as Schlafly knew: She watched the Nazis and Communists collude in invading Poland, and saw her friends and relatives march off to Europe or Asia to fight. She worked her way through Washington University during World War II through manual labor in a munitions factory, then married and raised six children. As Eagle Forum, the pro-family organization she founded, points out, “She taught all her children to read before they entered school and all had outstanding academic success: three lawyers, one physician, one Ph.D. mathematician, and one businesswoman.”

Socialist collectivism had conquered first Russia then Eastern and Central Europe, destroying family businesses, dynamiting churches, and stealing farmers’ land in pursuit of a different unearthly utopia —which agglomerated power by hollowing out every free institution of civil society, from boys’ and girls’ clubs to churches and schools, and even the family. The socialist program, under democratic or totalitarian guise, remains always the same: to smash up every barrier that protects the naked individual from the State’s vast molding fingers.

An exhausted and battered Western Europe in 1945 was tempted to surrender to what appeared as the wave of the future, and it was only the dogged resistance led by the United States of America that built up bulwarks against a total Soviet victory that would have snuffed out Western Civilization once and for all. It’s easy to forget that, now that the Soviet empire is a rusting, blood-stained memory: The Cold War was a close-run thing. Phyllis Schlafly helped steel America’s resolve during that the global struggle through the organization she founded, the Cardinal Mindzenty Foundation — named for a dogged Hungarian pastor who faced down Soviet inquisitors. Her group lobbied against those who would have enabled evil regimes to prosper by “normalizing” relations with governments that rested on naked force.

With a keen intellect disciplined by her strong Christian faith, Schlafly saw that America was not some pristine haven, immune to the viruses that afflicted the West. She saw even in the 1950s (as William F. Buckley had observed in God and Man at Yale) that our elites were quietly ashamed of America’s “backward” attachment to Constitutional norms and Christian principles of self-reliance and private philanthropy. Professors and writers, filmmakers and magazine editors, were beguiled by the economic pseudoscience of socialism, and deeply disillusioned with the moral norms that protected family life from selfish individualism.

With her surprise 1964 bestseller, A Choice Not An Echo, Schlafly called the sleepy, unreflective, pro-business Republican party back to its founding principles, and helped build up the fledgling conservative movement, contributing to the nomination of Barry Goldwater, and then through Eagle Forum and other grassroots efforts, to the 1976 and 1980 campaigns of Ronald Reagan.

When the U.S. Supreme Court hijacked the Constitution in 1973 in Roe v. Wade, Schlafly was one of the first to take up what seemed to “mainstream” Republican politicians a hopeless cause: the pro-life movement. When feminists rode the cultural juggernaut of “women’s lib” and tried via the Equal Rights Amendment make the Constitution willfully blind to the profound reality that men and women are different, Schlafly took up the “impossible” task of stopping that amendment — which was backed by three successive presidents, both the US House and Senate, and 50 governors. And in the teeth of every “realist” prediction, she succeeded. Since then, progressives have given up playing by our Founder’s rules and trying to pass amendments to the U.S. Constitution. Instead, they slip past compliant Republican senators radical appointments to federal courts, and those judges amend the Constitution themselves, several times a year, by judicial fiat.

Schlafly warned, forty years ago, of the madness that would result from denying the unique and distinctive natures of the sexes, and all her most “alarmist” predictions have come sadly true. Deprived thanks to Schlafly of any real Constitutional basis, President Obama has used Title IX and the octopus of federal funding to dismantle women’s privacy in the most intimate settings, and put the force of law behind the fantasy of “transgender” theorists. Ideology hates the realities that block its attempts to frogmarch us into utopia: Among those roadblocks are love, family, marriage, and biological sex. So privileged ideologues use their dominance of institutions and then the power of the State to bully us into denial of these foundational facts.

Phyllis Schlafly wouldn’t be bullied, and couldn’t be ignored. We would call her a force of nature, but that wouldn’t do her justice. She was in fact a force of culture, a uniquely American character who grew on our native virtues and pointed out our blind spots. She loved her fellow citizens enough to wish them the same happiness which she had found in freedom, pursuing the virtues, and maintaining always in her own life and work the dignity proper to a free citizen of a republic.

Eternal rest grant unto her, O Lord, and may perpetual light shine upon her. May her soul and all the souls of the faithful departed, through the mercy of God, rest in peace.