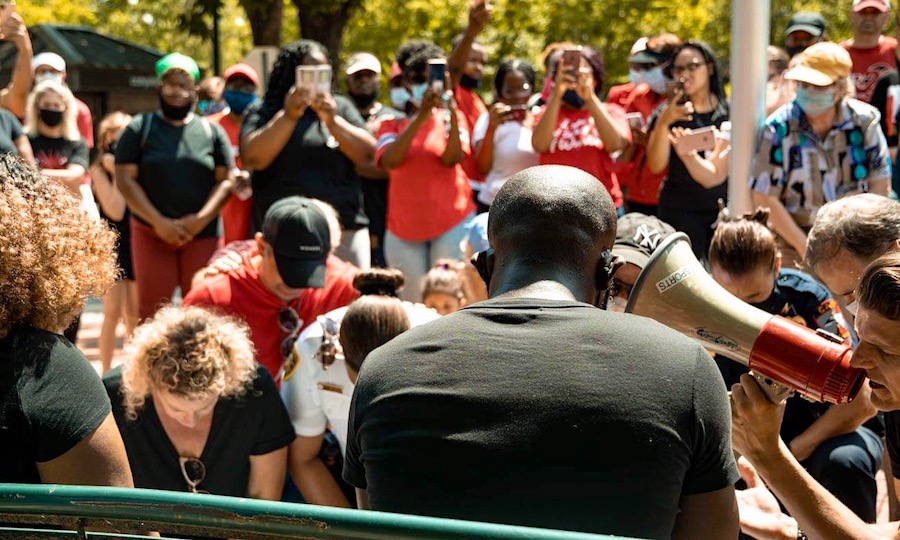 On June 6, 2020, Pastor Murray Smith (right) of Catch the Fire Church leads the crowd in prayer at the conclusion of the Peaceful Unity Prayer Walk in Cary, N.C. He knelt alongside clergy and public officials as they prayed for Pastors Soboma and Faith Wokoma of Legacy Center Church.

“Our community, state, and nation are hurting,” stated Harold Weinbrecht, mayor of Cary, N.C. “Tragically, the mindset that skin color makes someone different from others remains.”

This past Saturday, an open and honest approach to addressing racial injustice led Mayor Weinbrecht and three area police chiefs to participate in a faith-based public event — the Peaceful Unity Prayer Walk.

Hundreds of thousands of Americans marched in protests over the weekend. Though many were peaceful, some resulted in rioting and violence.

Led by Legacy Center Church in Cary pastored by Soboma and Faith Wokoma, the unity walk was co-sponsored by Catch the Fire Church and King’s Park International Church (both in nearby Durham). 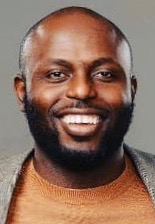 Media coverage by TMZ and Yahoo News focused on a few minutes of the hours-long Peaceful Unity Prayer Walk. It concluded with the religious act of two white pastors washing the feet of two black ministers.

The clergy called on all present to take a knee to humble themselves before God, and public officials joined in. Pastor Murray Smith of Catch the Fire Church led this portion of the unity walk.

“Lord, we confess and repent [of] our aggression, our pride—for thinking that we are better, that we are above,” he prayed. “We repent for our greed… for prejudice, to this very day, in our legal system. God, I ask for your forgiveness.”

“We’re asking for the justice of God [and] equality before God — that’s all we ask for.”

Cary police chief Toni Dezomits participated in the ceremony. “I was honored to be asked if I would like to participate in this very special and spiritual moment [of] ceremonial foot washing,” she stated in a Facebook post.

“In the biblical sense, the act of foot washing is a symbolic act of love and humility,” added Chief Dezomits. “It is not an act of humiliation and power. There was a great feeling of love, connectedness, and mutual understanding created through this experience.”

Standing in Solidarity for Black Lives

Among participants, perspectives varied on their stated purpose for the unity walk. 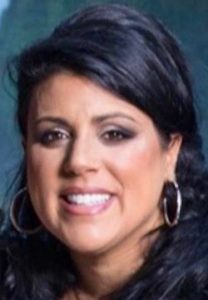 “Today, our African-American brothers and sisters are hurting,” said Shara Chalmers, a lay leader at Catch the Fire Church.

“First Corinthians 12 says: ‘When one member suffers, we all suffer.’ Churches across the region came together to say: ‘We are standing for you.’ When people try to make it all political, it’s missing the point.”

Chalmers instigated the march alongside her friend Dr. Faith Wokoma. They joined forces, realizing each had been planning marches in the wake of recent events.

In addition to the killing of George Floyd, two other black lives had been lost closer to home due to unjust actions: Breonna Taylor in Louisville, Ky. and Ahmad Arbery in Brunswick, Ga.

Chalmers, a mother of two and itinerant minister alongside her husband Daniel, saw a higher purpose at work. “This was about speaking to people of color in our area,” she said. “In humility, we said: ‘We love you. We see you. We’re listening and learning. And we will model a different agenda.’”

In his statement, Mayor Weinbrecht viewed the walk as embracing principles espoused at the American founding “to reach our true potential as a nation.”

He cited lines from the Declaration of Independence: “We hold these truths to be self-evident, that all men are created equal [and] endowed by their Creator with certain unalienable rights…”

Having become naturalized in the U.S. from Nigeria, Pastor Wokoma brings a global view to addressing racial discrimination.

“What we [are] speaking up against is not just an American problem,” said Wokoma. “It’s institutionalized in America. But it’s a global problem of how we view one another, how man is depraved in seeing his fellow man of a different color as less than.”

“We’re asking for the justice of God [and] equality before God — that’s all we ask for.” pic.twitter.com/JQ9SzUd6WM

Leaders said moments of confession were part of the church “standing in the gap” to “repent on behalf of the sins of our nation.” They cited the doctrine of identificational repentance. However, some observers claimed this spiritual focus engenders false guilt and victimhood.

Chalmers noted how three police chiefs participated in the Unity Walk. “One of those police chiefs is the daughter of a civil rights activist,” said Chalmers. “So these weren’t ones that had perpetrated egregious unjust violence.

“Yet, on behalf of the police, where there has been a history of brutality, they were asking forgiveness.”

She believes this reflected truths of the Christian faith. “These officers and leaders committed to lead and exercise authority by serving,” she said. “What Jesus modeled is that the greatest among you will be the servant of all.”

For participating churches, they view the much-publicized Unity Walk as only a beginning. At press time, action points for further joint advocacy were being drafted by leaders.

“This was one drop in the bucket,” said Chalmers. “But it’s just the beginning of multiple events to help heal the racial divide.”

The Wokomas were particularly excited that, four years since its launch, Legacy Center Church was moving towards the groundbreaking of their own building. They believe it will be a hub for further prayer and action across dividing lines.

“We as Christians, as sons of God, as believers need to lead the way in understanding what the heart of God is [for] justice,” said Pastor Wokoma.