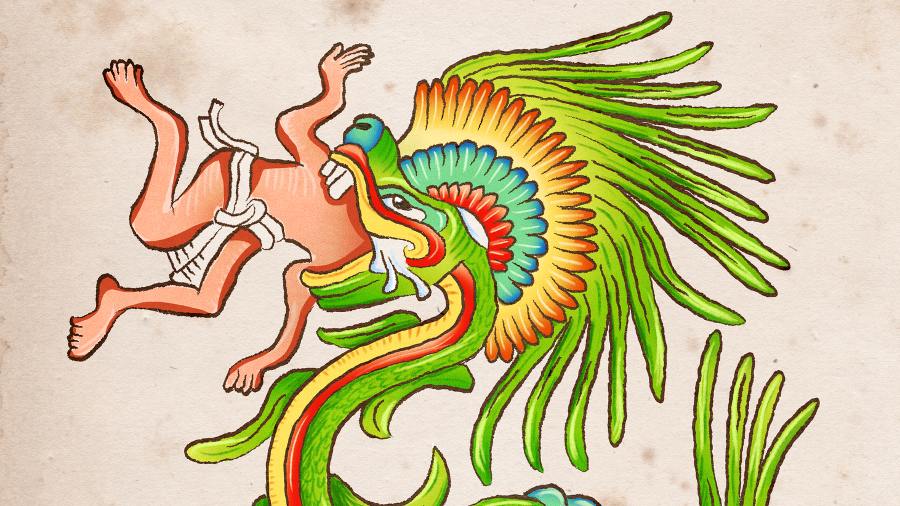 An image of Quetzalcoatl, reproduced here as Aztecs portrayed the god in a 16th-century painting, shows a feathered serpent who required human sacrifice.

How do you undo the sin of “theocide,” which the colonial settlers allegedly committed when they “killed” the gods of the native American peoples, replacing those deities with the God of Christianity? It’s simple: you have schoolchildren chant to the Aztec gods. At least that’s what a new curriculum for California is proposing. Need I add the words, I kid you not?

Christopher Rufo has reported on this at length, noting that “R. Tolteka Cuauhtin, the original co-chair of the Ethnic Studies Model Curriculum, developed much of the material regarding early American history.”

Chanting to the Aztec Gods to “Decolonize” American Society

In short, the “ultimate goal is to ‘decolonize’ American society and establish a new regime of ‘countergenocide’ and ‘counterhegemony,’ which will displace white Christian culture and lead to the ‘regeneration of indigenous epistemic and cultural futurity.’”

Now, little children might be taught to chant prayers to these bloodthirsty demons — and on your tax dollars as well, if you live in California and this curriculum passes.

Specifically, “The curriculum recommends that teachers lead their students in a series of indigenous songs, chants, and affirmations, including the ‘In Lak Ech Affirmation,’ which appeals directly to the Aztec gods. Students first clap and chant to the god Tezkatlipoka — whom the Aztecs traditionally worshipped with human sacrifice and cannibalism — asking him for the power to be ‘warriors’ for ‘social justice.’ Next, the students chant to the gods Quetzalcoatl, Huitzilopochtli, and Xipe Totek, seeking ‘healing epistemologies’ and ‘a revolutionary spirit.’ Huitzilopochtli, in particular, is the Aztec deity of war and inspired hundreds of thousands of human sacrifices during Aztec rule. Finally, the chant comes to a climax with a request for ‘liberation, transformation, [and] decolonization,’ after which students shout ‘Panche beh! Panche beh!’ in pursuit of ultimate ‘critical consciousness.’”

Who are These Gods? Bloodthirsty Demons

And what, exactly, did the original worshipers do in honor of their gods? According to History.com, “When the Spanish conquistador Hernán Cortés and his men arrived in the Aztec capital of Tenochtitlán in 1521, they described witnessing a grisly ceremony. Aztec priests, using razor-sharp obsidian blades, sliced open the chests of sacrificial victims and offered their still-beating hearts to the gods. They then tossed the victims’ lifeless bodies down the steps of the towering Templo Mayor.”

The Science.mag website describes it like this: “The priest quickly sliced into the captive’s torso and removed his still-beating heart. That sacrifice, one among thousands performed in the sacred city of Tenochtitlan, would feed the gods and ensure the continued existence of the world.”

The relevant article was titled, “Feeding the gods: Hundreds of skulls reveal massive scale of human sacrifice in Aztec capital.”

Now, little children might be taught to chant prayers to these bloodthirsty demons — and on your tax dollars as well, if you live in California and this curriculum passes.

Remember When We Took Prayer Out of Schools?

But God forbid you quote the Bible in a positive way in the classroom, let alone speak well of Jesus, let alone call for prayer to the one true God. Heresy! Not in our schools! Remember the separation of church and state! As for chanting to the Aztec gods, that is what we call being enlightened and progressive.

But of course. How dare we replace the tolerant concept of human sacrifice — yes, slicing open living human beings and offering their still-beating hearts to these idols — with the barbarous idea that the Son of God laid down His life for us. There’s no way the civilized worshipers of these Aztec idols should have been indoctrinated with such horrible, Christian myths.

And I wonder if the new curriculum will include this salient detail about the treatment of “an ill-fated Spanish convoy from Cuba who entered Aztec territory in 1520 on a mission to deliver supplies to notorious Conquistador Hernan Cortes”?

Would the Curriculum Mention These Grisly Details?

This was the end of their story: “Dismembered bodies of men, women and children were devoured by their cannibalistic captors after they were used as human sacrifices. The remains of more than 450 people found at the ancient Zultepec-Tecoaque site in what is now modern day Mexico City have been examined by experts. The victims were held for around six months and were well-fed before being used in sacrificial enactment scenes from Aztec mythology, according to archaeologists.”

So, it wasn’t just the Spanish conquerors who committed atrocities. It looks like the sword cut both ways, in this case, ending not just in a grisly death but in cannibalism. The victims were literally fattened for slaughter, then sacrificed.

Perhaps that should be discussed in the classrooms too? Or maybe they should just end the lesson with a feast in emulation of the cannibalistic killers?

All sarcasm aside, we’re quite aware today of the sins of the Spanish conquistadors. And we’re also aware that not all the early Puritan settlers were saintly Christians.

But to the extent that we demonize American history, we forget the powerful, Judeo-Christian roots that helped make our nation thrive. And while we do not want to establish a theocracy in which Christian leaders force the nation to attend church services and live by the Bible or else, we absolutely believe that, to the extent we willfully embrace the wisdom of the Word, to that extent we will be blessed.

The Old Deluder Act: Public Schools Started So Children Could Learn to Read the Bible

It was ordered, therefore, “that every township in this jurisdiction, after the Lord hath increased them to fifty households shall forthwith appoint one within their town to teach all such children as shall resort to him to write and read.” This way, as the children learned to read English, they would be able to read the Bible.

Similar sentiments were expressed in the New Haven Code of 1655, which stated that the purpose of education was to equip children to be “able duly to read the Scriptures … and in some competent measure to understand the main grounds and principles of Christian Religion necessary to salvation.”

And, as I noted in Saving a Sick America, “In 1690, the first New England Primer we published. The alphabet was taught using Bible verses for each letter, and the primer contained questions on the moral teachings of the Scriptures, children’s prayers, the Lord’s Prayer, the Ten Commandments, the Shorter Catechism and questions on the Bible by Mr. Cotton. The New England Primer continued to be in wide use in American schools of all types, public, private, home or parochial, for the next 200 years.”

Our Children and Society Need the God of Life and Truth

Yes, America had its blemishes back then, but it was through the teachings of the Bible and the liberating message of the cross that those blemishes were addressed and, in many cases, removed.

Today, we are going in the reverse direction, and at high speed at that. Having thrown the Bible out of the classroom decades ago, the void is now being filled, not just with radical leftist ideologies but with pagan, demonic worship.

May the God of life and truth rise up again in our culture, beginning with each of us individually, and the may the names of other gods be forgotten once and for all — for America’s sake and, above all, for the sake of our children.

The Moment of Silence Heard Around the Nation