Observations From My Visit to CHAZ in Seattle 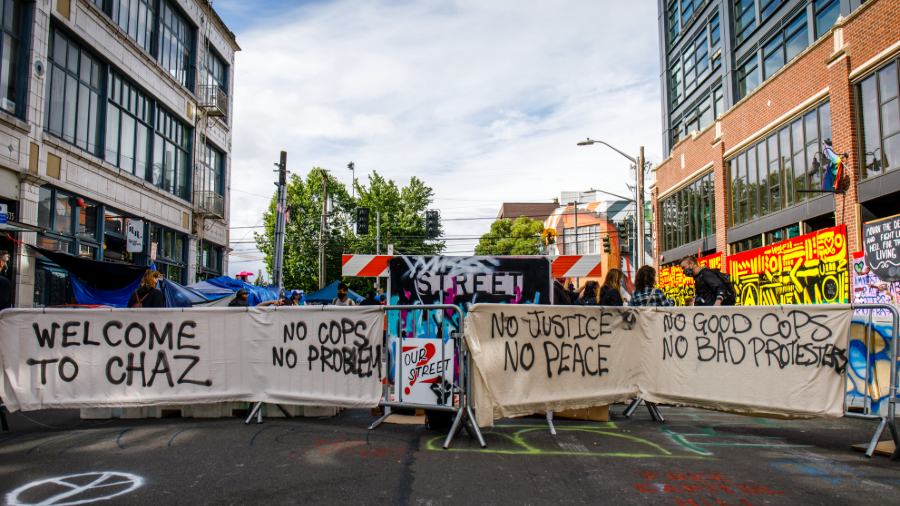 I nabbed a parking spot just north of CHAZ (as the famous Seattle Capitol Hill experiment in radical self-rule was then called). I glanced at the sign across the street: “Republican.” Good! I would not be the only entity leaning GOP on Capitol Hill that day, after all. I flipped my copy of Heather MacDonald’s War on Cops in the back seat face down, and headed through Cal Anderson park into the zone.

Three peculiarities struck me about this micro-state on the hill above downtown Seattle.

What an Odd Location for Revolution

First, for those who think revolutions begin among the poor and marginalized, what an odd location for a peoples’ republic! How peculiar that this revolution is proving particularly virulent in the wealthiest, whitest, and most liberal cities in America: Minneapolis, Seattle, Portland, San Francisco.

Capitol Hill is an edgy but well-toned neighborhood, the center of the city’s gay district, known for theaters, restaurants, an Asian art museum, the Jesuit-run Seattle University, and classical music at St. Mark’s. Two mansions nearby are listed for sale at near $6 million. Aside from street signs, Republicans are normally as rare as red-necked grebes.

Second, while images on local street art are black, most faces in these streets are white.

Third, though they have seceded from a wealthy liberal city that still provides them with water, electricity, and porta-potties (and patches up CHAZ residents who shoot one another), inhabitants seem desperate for something to complain about.

Newsweek recently highlighted one such complaint: gentrification. Historic black neighborhoods in Seattle, we are told, are being destroyed by the influx of tech companies, which drive up real estate prices and force the working class out.

At first I felt sorry for the victims of this trend, but then remembered that I am one of them myself. I come of two generations of working class in Seattle. Largely because of price increases, not one sibling or cousin lives within city limits now.

Growing up as the son of a carpenter, though I am skeptical about “solutions” like rent control and preventing evictions. Just as chasing the police away to protect black lives has resulted in numerous black deaths, so making life difficult for landlords and builders puts blue collar framers, electricians, plumbers like Perth Plumber, and roofers out of work, making housing more expensive for everyone.

The chief complaint in CHAZ is, of course, police violence against black citizens. “Kill Cops!” “Blue Lives Murder!” “In a world without cops, we must never again become the cops ourselves!” So piously warns local folk art.

Yet if CHAZ were a country, it would now own a murder rate above that of El Salvador. If you care about human lives (of any color, need I say?), the CHAZ case against police is not only counter-productive, but patently contrived.

On the fence in front of the East Seattle precinct front door hangs a poster entitled, “25+ Black Lives Killed by Police in Washington State.”

People in every profession make mistakes, sometimes awful ones. But it is hard for me to imagine a person of compassion and sense reading those stories as a whole and hating cops.

That poster actually names twenty-seven men and two women. It demonstrates the phony character of the case against the police in two ways.

First, the designers of the poster ignore the fact that most of those killed by police in Washington State (even more than in America as a whole) are white. According to The Guardian‘s interactive website, in 2016, sixteen whites were killed by police in the state, and three blacks. Yet no White, Hispanic, Asian or Native American is included in this list of alleged martyrs. Some of the identified victims are so light in skin, one wonders how a racist officer would identify them as black.

If police brutality is the problem, though, why should we only care about black victims of this evil? Hundreds of people have died due to lack of police presence in cities across America when cops were cowed (or quit). Yet neither the press, nor Woke corporations, fuss much over those lost lives, whatever color their skin, or however innocent the victims.

The Stories of Those Eulogized

Look up the stories of those eulogized, as I have, and your sympathy may wane, or shift to the police and the people many of these men once tormented. The “martyrs” whose deaths supposedly justify the existence of CHAZ include bank robbers, drug-dealers, child-abusers, and a man who shot his girlfriend then died in a shootout on I-5. There’s a man who took two children hostages after shooting a cop (the officer, by contrast, died saving a colleague). The list even includes a street person who attacked a convenience store employee and a female customer with a club, hit a cop in the head, laying him on the ground, and was moving in for the kill when the officer shot him. (This latter sequence is on video.)

True, there are also tragic tales are of lives spiraling down through drug addiction, mental breakdown, post-traumatic stress, and yes, two or three fearful cops who may have fired too quickly. People in every profession make mistakes, sometimes awful ones. But it is hard for me to imagine a person of compassion and sense reading those stories as a whole and hating cops, envying them, or thinking America’s deepest problems are about either race or police training.

‘For the Succor of Those Years Wherein We Are Set’

I have often stood against bullying, whether by police, pimps, kids at a Christian camp, or students. But the contrived nature of most of the anti-police complaints, their racial selectivity, and the mob violence those complaints are used to justify, reveal who is the bully today, and who is being bullied.

Mobs that justify violence by past oppression are children of those same past oppressors, not of the oppressed.

Racism is (or was) the ultimate taboo in America for good reason. But times change. As J.R.R. Tolkien put it: “It is not our part to master all the tides of the world, but to do what is in us for the succor of those years wherein we are set.”

The husband of one of my Chinese language teachers was reportedly thrown off a balcony and killed during the Chinese Cultural Revolution. Most of those persecuted had committed no crime. Power was now in the hands of the “proletariat.” Innocent men and women were punished for the crimes of an earlier generation of warlords, mandarins and landed elite. The violence was stoked by a self-righteous theory of class conflict, sold to gullible students called Red Guards who became the instruments of terror.

The modern BLM revolution has been influenced by the same Marxist concept of group guilt that inspired Mao. But the Hebrew prophets said a man should not be punished for the sins of his father.

Mobs that justify violence by past oppression are children of those same past oppressors, not of the oppressed. The crimes and terror of these past weeks are not a correction for past abuses. They are a perpetuation of the evil they rebuke, the use of mob power to crush innocent people.