Why I Was Not Enthusiastic About the ‘March for Our Lives’ 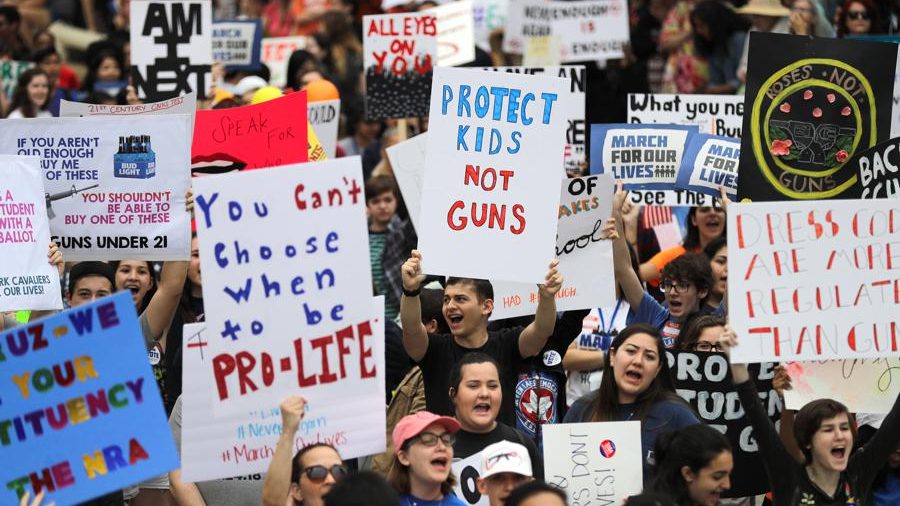 Crowds of people hold signs on Pennsylvania Avenue at the "March for Our Lives" rally in support of gun control, Saturday, March 24, 2018, in Washington.

A colleague wrote to me on Saturday, “I hope you’ll be writing some positive reports about the massive rallies for gun controls – it’s a pro-life position!” I wish I could, but I can’t. The “March for Our Lives” was hardly a non-partisan, pro-life event.

To be clear, whenever I write about guns and gun control — which is not often — I get blasted from both the left and the right because I don’t have a personal dog in the fight.

We all agree that we have a problem with gun violence in America. The question is: How do we fix the problem?

The massacre at Stoneman Douglas High School in Parkland, Florida sparked a national outcry for new gun laws to be passed. But this horrifically tragic event only took place because of massive failures in our existing system.

Simply stated, if our current laws had been enforced and if law enforcement had properly done its job, mass murderer Nicholas Cruz would not have owned a single fire arm. The system would have flagged him, any guns he already owned would have been confiscated, and he would have been the last person to get near that school.

Why, then, make this massacre the cause célèbre for gun control?

Barely one week ago there was another school shooting. But this time, the shooter was shot and killed by an armed-resource officer after wounding two students. (One of the students, 16-year-old Jaelynn Willey died Thursday night.)

As The Stream’s Liberty MacArtor pointed out: 1) “The Shooter Possessed a Handgun Illegally, Despite Maryland’s Strict Gun-Purchasing Laws”; 2) “Maryland’s Ban on High Capacity Magazines and Assault Weapons Didn’t Stop The Shooting”; and 3) “An Armed Resource Officer Stopped the Shooter and Saved the Day.”

Did this spark a national call for the presence of trained, armed resource officers on every campus?

To be sure, the casualties in the Maryland shooting were dwarfed by the numbers in Florida (one killed, one wounded, compared to 17 killed and 14 wounded). But those numbers might have been much closer had the shooter not been killed first.

Yet very few voices, comparatively speaking, were raised in favor of having trained, armed personnel present at our children’s schools. This was not high on the left’s agenda.

The March for Our Lives Was a Partisan Event

As for the March for Our Lives (along with the student walkout several days earlier), this hardly took place in a vacuum. And that, for me, is why I can’t be enthusiastic about the event, even though: 1) I’m glad to see people (especially young people) standing up for a cause; 2) I appreciate the grief and anger of victims of gun violence; and 3) as previously stated, I’m open to any constructive discussion about ways to reduce gun violence.

Unfortunately, the March for Our Lives is part of a partisan political battle (see the relevant comments of Parkland student Kyle Kashuv).

As noted by Jarrett Stepman, who attended the event for the Daily Signal, “It may seem painfully obvious, but it is worth noting the march in Washington was clearly a left-wing protest. … The pink hats from the 2017 Women’s March made a widespread reappearance, as did numerous anti-Trump or generally anti-Republican signs. The crowd was certainly not a representative slice of what the country as a whole thinks about gun control, nor did it represent the opinions of most young Americans.”

Protestors even held signs declaring, “Stop Making Laws to Control My Body. Make Laws to Control Your Guns.” So much for this being a “pro-life” event – at least, in the fullest sense of the word. (Was the march named to contrast with the annual pro-life, anti-abortion, “March for Life”?)

And that, again, is what concerns me: The debate about gun control is so highly politicized that it is almost impossible to have a rational discussion.

On the one side, a March 2, op-ed piece in the New York Times claimed, “The students of Parkland are like veterans coming home from the bloody front of the N.R.A.’s de facto war on children. They’ve seen their friends, teachers and coaches gunned down in the halls. To them, powerful Washington lobbyists and United States senators suddenly look like what they are: cheesy TV spokesmodels for murder weapons. It has been inspiring and thrilling to watch furious, cleareyed teenagers shame and vilify gutless politicians and soul-dead lobbyists for their complicity in the murders of their friends. Last week Wayne LaPierre was reduced to gibbering like Gen. Jack D. Ripper in ‘Dr. Strangelove’ about a ‘socialist’ takeover and ‘hardening’ our schools. You could see the whites all around his irises. That look is fear.”

On the other side, on the day of the March for Our Lives, the NRA posted on Facebook, “Today’s protests aren’t spontaneous. Gun-hating billionaires and Hollywood elites are manipulating and exploiting children as part of their plan to DESTROY the Second Amendment and strip us of our right to defend ourselves and our loved ones.”

In my view, the truth is somewhere between these two statements. (Yes, I’ll get bashed from both sides for stating this; so be it.)

And that’s why I couldn’t get enthusiastic about the March for Our Lives. The important issues it raised and the passion it expressed were dangerously mixed with radical-left politics. And that is not the way to solve our gun-violence problem.

It may draw headlines, but it won’t solve our very real problems.

Parkland — The Tragedy and the Farce

David Hogg, Other Gun Control Activists Are Protected By … Guns